Katie-George Dunlevy and Eve McCrystal were winners of the time trial event, with their Irish teammates Josephine Healion and Linda Kelly coming home in second place 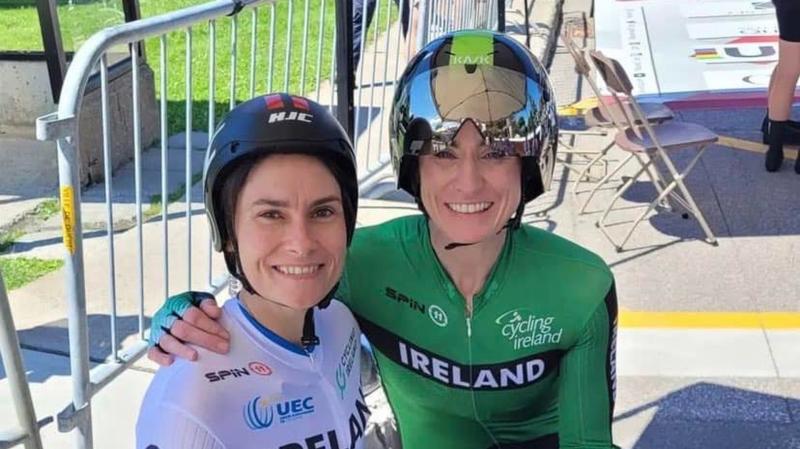 Katie-George Dunlevy and Eve McCrystal all smiles in Canada

There was an Irish one-two at the paracycling road World Cup in Québec, Canada, with Katie-George Dunlevy and Eve McCrystal winning gold ahead of  Josephine Healion and Linda Kelly in the Women’s B Time Trial.

Dunlevy and McCrystal finished in a time of 38 minutes 45.39 seconds, having clocked the fastest time of the field on both of the two laps.

Some 29.71 seconds later, Healion, from Offaly’s Tullamore Cycling Club, and Kelly, New Ross, Wexford, finished ahead of the third-placed Swedish pair of Louise Jannering and Cartrin Nilsson, who were 1 min 42.04 behind the winners.

Born in Crawley, Dunlevy is a daughter of John Dunlevy from Mountcharles and her pilot McCrystal is a native of Dundalk, Co Louth, and a Garda based at Ballybay, Co Monaghan.

On Sunday, they are back in the saddle for the road race in Québec and next weekend, the World Paralympic Cycling Championships takes place in Baie-Comeau, with their events - the time trial and road race - taking place on Friday, August 12, and Sunday 14.