Lara McBride caught the eye while helping Ireland Under-17s to a 3-1 win in a T20 series against The Netherlands Under-18s this week. 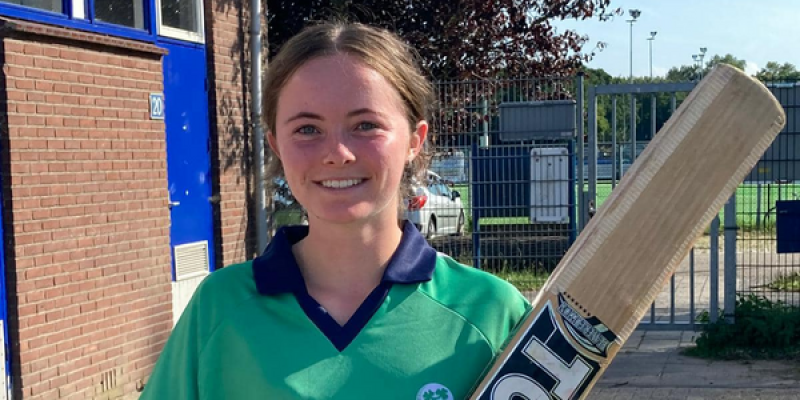 Lara McBride in Utrecht with the Ireland under-17s this week.

A young Irish cricket player with strong family ties to Donegal impressed in the green jersey this week.

Lara McBride, who plays for the Balrothery-based North County Cricket Club in County Dublin, featured for the Ireland Under-17s in a five-game T20 series against The Netherlands Under-18s.

At Sportpark Maarschalkerweerd in Utrecht, Ireland won the series 3-1, with one of the games drawn.

McBride hit 24 runs on Wednesday when Ireland won the fourth game in the series by six wickets. Ireland won the opening game on Monday by eight wickets before the second fixture was drawn, each team hitting 103 runs.

After The Netherlands claimed a 17-run win in game three, it was all to play for heading into the final two fixtures.

McBride’s 24 runs gave Ireland the edge in the series and then top scored with an unbeaten 35-run tally to seal a nine-wicket win on Thursday.

The Netherlands were skilled out for 83 with Ireland, aided by McBride’s haul, reaching 84 for the loss of only one wicket.

McBride, who is also a talented footballer, playing as a centre-back for Shelbourne under-16s and her links to Letterkenny are firm.

Her grandparents, Seamus and Mena McBride, still live in Meadowbank. Seamus McBride originally hails from Milford while Mena, nee McGroarty, is a native of Oldtown in Letterkenny.

Lara’s father, Joe McBride, and his four siblings, Bernie and Eileen - who live in Letterkenny - Sham, who is based in London, and Glasgow-based Charlie, were born in Glasgow, but the family moved to Letterkenny in 1988.

Joe is a former Letterkenny Rovers player and is now managing Shelbourne’s under-19 team in the Women’s National League. His son Ben also plays for Shels and North County while younger daughter Eve has also taken up the bat and ball with North County.

Earlier this year, Lara won the under-15 Gaynor Cup while playing for the Metropolitan Girls League (MGL) Academy.