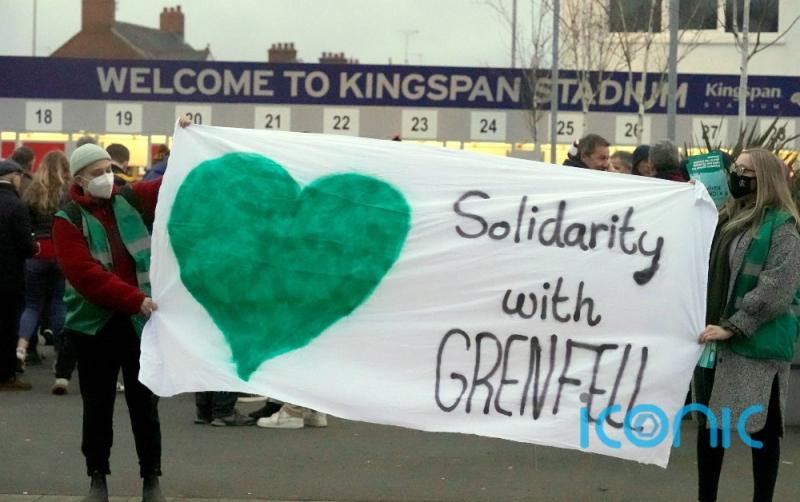 Protesters have demonstrated outside the home of Ulster Rugby to demand that the club severs ties with main sponsor Kingspan in light of the Grenfell Tower disaster.

Kingspan products were used in Grenfell tower block in west London, where 72 people were killed in a fire in 2017.

The Irish insulation firm is Ulster Rugby’s shirt sponsor and also holds naming rights to their home stadium in Ravenhill in south Belfast.

A number of people belonging to a group called Community Action Tenants Union (CATU) gathered at the Kingspan Stadium on Saturday afternoon ahead of Ulster’s European Champions Cup clash with Clermont Auvergne.

Campaigner Kate Alizadeh said they wanted to engage with supporters and highlight their concerns about Kingspan.

“It’s just an action to stand in solidarity with the people who survived the Grenville Tower disaster and also people living in unsafe safe housing in Northern Ireland and elsewhere,” she said.

“We want to make a connection with fans and also raise awareness about Kingspan.”

However, Kingspan has insisted that its K15 insulation product made up only 5% of the insulation in the tower block, and was used without its recommendation.

It has also said that the exterior cladding, which it did not manufacture, was deemed by the inquiry to be the “principal reason” for how quickly the fire spread.

UK Cabinet minister Michael Gove wrote to Ulster Rugby last month to ask them to reconsider their relationship with Kingspan while the Grenfell Inquiry is ongoing.

Earlier in December, Formula One team Mercedes announced they had ended their sponsorship deal with Kingspan, saying it was “not appropriate” to continue the partnership.

Ulster Rugby has previously said a review of its sponsorship partnership was ongoing.