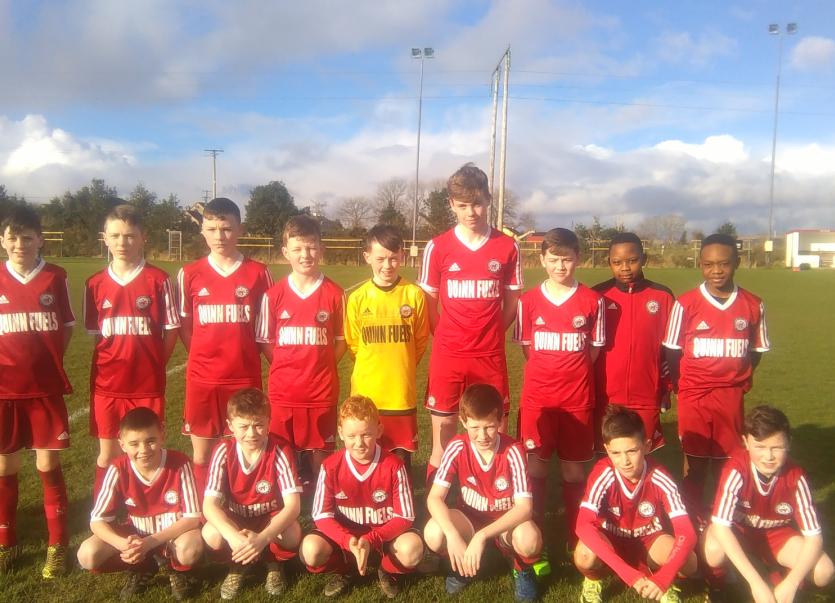 Cappry Rovers, pictured before Saturday's win over Nenagh in the U-13 National Cup.

In front of a big crowd at Cappry Park, Cappry Rovers produced a wonderful display to advance to the last 16 of the U13 national cup on Saturday afternoon.

James Long’s young side were worthy winners against a Nenagh outfit who played well in the second half, but just didn’t do enough to spoil Cappry’s day.

The home side had dominated the first half of this last 32 encounter, but for all their possession and good chances, they only led 1-0 at half time.

Their goal came from Kevin McCormack on eight minutes when he did well to finish from close range after Cappry had twice hit the woodwork. Firstly Luke McGlynn’s long range effort came back off the post and Shaun Ward’s follow-up was turned onto the bar by keeper Andrew Ryan. But while Nenagh should have cleared the danger, McCormack stole in to send the ball to the net.

Mark Mbuli also struck a post as Cappry threatened a second while Jack Long was just over from outside the box.

With McGlynn excellent at midfield and Shaun McMenamin and Daniel Marley also catching the eye, Cappry were dominant.

They added a second 11 minutes into the second half when Shaun Ward’s shot from way out on the right deceived the keeper and squeezed in at the near post.

But credit to Nenagh, they upped their game as they went in search of a response and they were rewarded with a well taken goal from Sam Rosney with 13 minutes to go.

The tie was delicately poised going into the final ten minutes but Mark Mbuli calmed any Cappry nerves when he ran through to make it 3-1.

The goal capped a fine display from the Cappry striker.

Indeed this was an all-round excellent team performance from the Twin Towns club and they can now look forward to another home tie in the next round, against either Westport United or Forth Celtic.