Harps drop into the relegation places after 4-0 loss 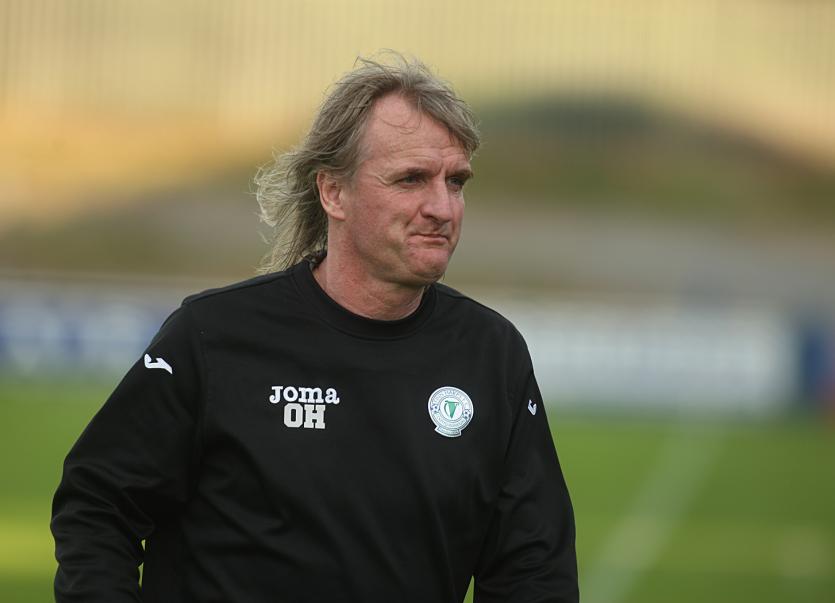 Finn Harps have dropped into the relegation places after they were well beaten by St. Patrick’s Athletic at Richmond Park on Friday night.

The scoreline will suggest this was a one-sided affair but three of the St. Pat’s goals came in the closing seven minutes of the game.

That will be of little consolation to Ollie Horgan and his team who had lost at home to relegation rivals Galway in their last league game.

This latest defeat, coupled with Sligo Rovers’ surprise 1-0 away to Cork City, means Harps now drop to third from bottom in the Premier Division table.

It could have been worse for Ollie Horgan’s side. They would have been in the bottom two as Galway United led Shamrock Rovers for much of their game at Eamonn Deacy Park before Rovers scored twice in the dying minutes to deny Galway the points.

Drogheda United remain firmly rooted to the bottom after losing again, 2-1 at Bray.

Harps sit third from bottom on 27 points (25 played). Galway have 25 points (26 played) and Drogheda have 18 (26 played). Sligo move ahead of Harps onto 28 points but have played two games more.

Harps, without the suspended Caolan McAleer and Paddy McCourt, started quite well at Richmond Park and Jonny Bonner and Ibrahim Keita both had early efforts on goal.

St. Pat’s weren’t helped by the loss of Christy Fagan just before kick off. The striker had been named in the starting eleven but was replaced late on by Josh O’Hanlon.

But they didn’t take too long to settle into their stride and Ciaran Gallagher was called into action on 11 minutes, to push a Michael Barker striker around the post.

Shortly after the midway point of the half, the home side broke the deadlock. Graham Kelly beat Gallagher low into the corner after fine approach play involving O’Hanlon and Owen Garvan.

Harps did enjoy good periods of possession in the first half and Keita and Dsane both looked lively in attack. Keita was unlucky to see a well struck effort go wide of the post as Ollie Horgan’s side sought an equaliser.

But the home side saw out the first half and if anything, they were the team on top after the break. Straight from the off, O’Hanlon was close to scoring a second but his goalbound effort was cleared off the line.

Barker and Conan Byrne then combined to set up another chance but Ciaran Coll did well to clear for the visitors.

Harps did almost draw level just before the hour when Dsane got on the end of a Sean Houston delivery only to head wide of the target from a good position.

Pascal Millien and Danny Morrissey were both introduced for the Donegal side during the closing stages.

But St. Pat’s struck for the all-important second seven minutes from the finish when substitute Kurtis Byrne converted Dennehy’s cross.

Then on 90 minutes, they scored a third when Conan Byrne played a one-two with Kurtis Byrne before finishing to the net. The fourth was scored in injury time by Kurtis Byrne.

Harps finished the game with ten men when Eddie Dsane was sent off close to the finish. He will now miss Monday night’s visit of Cork City.