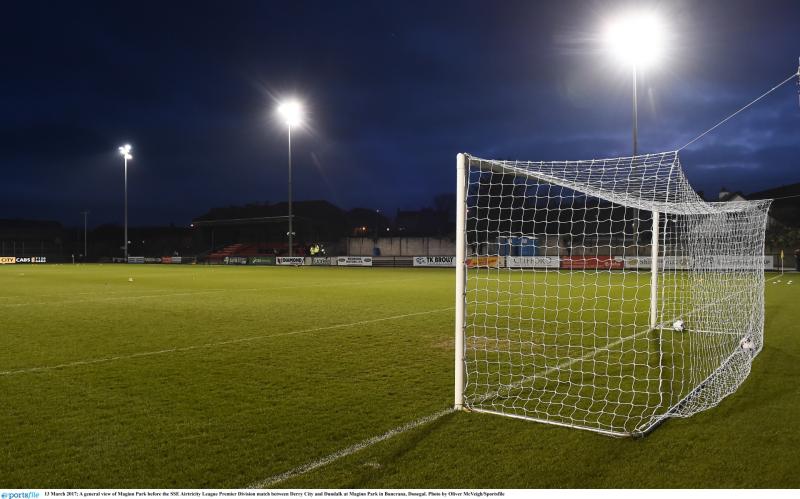 A general view of Maginn Park. Photo by Oliver McVeigh/Sportsfile

The Republic of Ireland Schools Under-18 Boys will take on Northern Ireland in the Centenary Shield at the Buncrana venue on March 31.

Maginn had been set to host the same fixture last year, but the Covid-19 pandemic saw it shelved.

At the time, Buncrana native William O’Connor was the manager of the Republic of Ireland Schools side.

Bray schoolteacher John McShane is now managing and his side will take to Maginn at the end of March.

Finn Harps manager Ollie Horgan is the performance analyst with the squad and Milford man Mickey McGlynn is the physiotherapist.

Finn Harps attacker Jamie Harris, a student at St Columba’s College in Stranorlar, is expected to be a part of the Irish squad for the Centenary Shield campaign.

Ireland entertain Scotland on St. Patrick’s Day in Whitehall to open their campaign.

They are also scheduled to face England in Eastleigh  on April 8 and Wales in Caernarfon on April 21.

Maginn Park, the home of the Inishowen Football League, served as the temporary home of Derry City during the 2017 League of Ireland Premier Division season while redevelopment works were ongoing at the Brandywell.

Seats installed in Maginn Park’s stand during minor upgrade works at the venue have remained. For that season, Maginn had a 1,574 capacity.