Bonagee into quarter-finals of North West of Ireland Intermediate Cup 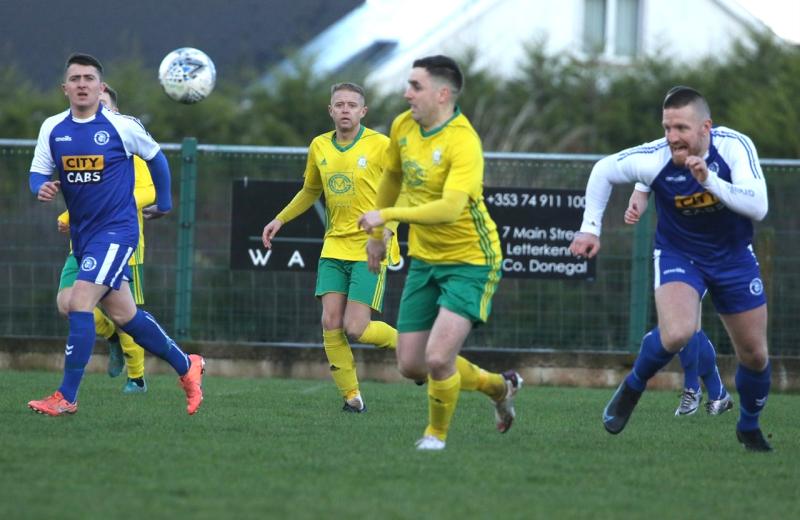 Chris McNulty at The Moss

Aidan McLaughlin and Peter Carr came off the bench to fire Bonagee United into the quarter-finals of the North West of Ireland Intermediate Cup.

A brace of extra time goals were needed after Trojans’ Lee McCafferty, who also came on as a replacement, cancelled out Michael Funston’s opener with an 83rd minute free kick.

Bonagee couldn’t put the game out of Trojans’ reach until the extra period before making their way into the last eight.

It was a first outing in this cross-border competition for Jason Gibson’s team. First incepted in late 2019, the onset of the Covid-19 pandemic cut the initial staging shot in 2020.

Only now, and a new version, has the competition, involving Ulster Senior League and Northern Ireland Intermediate League teams, been possible.

Bonagee were denied twice in the early stages by a familiar face as Eugene Ferry - who was goalkeeper at Dry Arch Park until last season -saving from Gareth Harkin and Deano Larkin.

Tony McNamee, the game’s outstanding performer, flashed wide from 20 yards after a fine first touch and a better second opened the possibilities.

Trojans had a big chance to break the deadlock in the 23rd minute, but Gary Fisher shot over after being teed up by Ethan Moran.

A minute later, Trojans were made pay as Bonagee broke the deadlock. Dan O’Donnell’s magnificent pass found Funston and the experienced midfielder held off his man and slotted to the bottom corner.

Late in the first half, Jamie Lynagh had to head away from beneath his own crossbar when an Ethan McSherry header beat Oisin Cannon.

A morning inspection ruled Dry Arch Park unplayable, but The Moss was on hand for a good Cup tie.

Funston fired wide with a decent opportunity to double the lead and Harkin’s low effort was parried away by Ferry.

Seven minutes from the end, Mark Harkin was pulled up for a foul on Gearoid McDermott 20 yards from goal. The incoming presence of two defenders perhaps saved Harkin from a card of some colour, but Bonagee were punished as McCafferty smacked the free in off the inside of the post.

Bonagee might have sneaked it in added time, but Ferry saved from Gareth Harkin, who combined with McNamaee on the edge of the box.

Bonagee showed their intent just 30 seconds into extra time when Jack Parke, after a good move involving Carr, curled onto the crossbar from the right-hand side.

Three minutes into the additional period, subs Jordan Armstrong and McLaughlin combined, the latter tucking home to the far corner.

Armstrong was denied by a good save from Ferry after McNamee slipped him through while Garbhan Grant rolled wide from a promising position.

Two minutes from the end, Carr extinguished any doubt, the youngster showing superb close control before applying the finish.