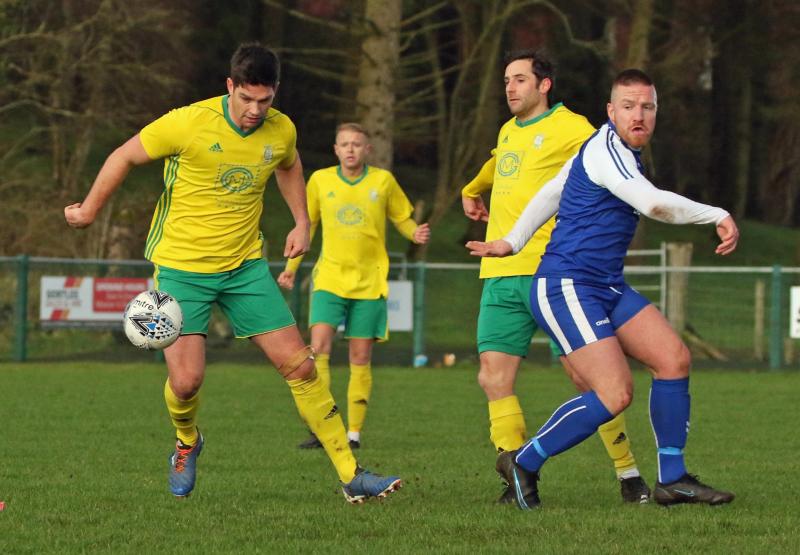 Packie Mailey gets on the ball for Bonagee with Gareth Harkin in support. Photo: Thomas Gallaghehr

Jason Gibson hailed the impact of his bench as Bonagee United overcame Trojans in the North West of Ireland Intermediate Cup.

Aidan McLaughlin and Peter Carr, who both came on as substitutes, netted the extra times goals in a 3-1 win. Michael Funston’s first-half goal might have been enough only for Lee McCafferty’s late free kick to send the tie to overtime.

“Football at this time of year is difficult anyway,” Gibson told Donegal Live.

“You’re back off the turkey and throw Covid and fitness levels into the mix.

“It was a good run out for us and it was beneficial. We did enough to get through and we wanted to stay in this competitions.

“As much as we wanted the run out, we didn’t really want extra time, but we got the job done.”

Bonagee had the better of the chances, but didn’t add to Fuston’s opener. They were made pay when McCafferty beat Oisin Cannon from a 20-yard free, a goal that breathed new life into Trojans.

Gibson said: “If we had taken a wee bit more care in the final third…we had the chances. We were trying a pass through the eye of a needle at times, instead of just sliding it through.

“If we had more care, we would’ve exploited that more throughout the game.

“They stuck one in from a free kick and there wasn’t much we could do about that. We had to react and the freshness off the bench was a big help.”

Gibson’s men currently sit atop the Ulster Senior League and also have an FAI Intermediate Cup clash against Everton of Cork next month.

The numbers game will be key for the Dry Arch men and Gibson was delighted as his replacements sealed a hard-earned win.

“They all contributed and it was good from a squad point of view. It’s difficult probably when they aren’t getting as much game time and you can preach the importance of a squad all you want, but thankfully they did the business for us.

“Peter has been excellent for the Donegal League team this season and I’m delighted he stepped in like that today.”