With 20 seconds of the four minutes of injury time to play, Sam Long made a point-blank save from Yoyo Mahdy to earn his side a draw 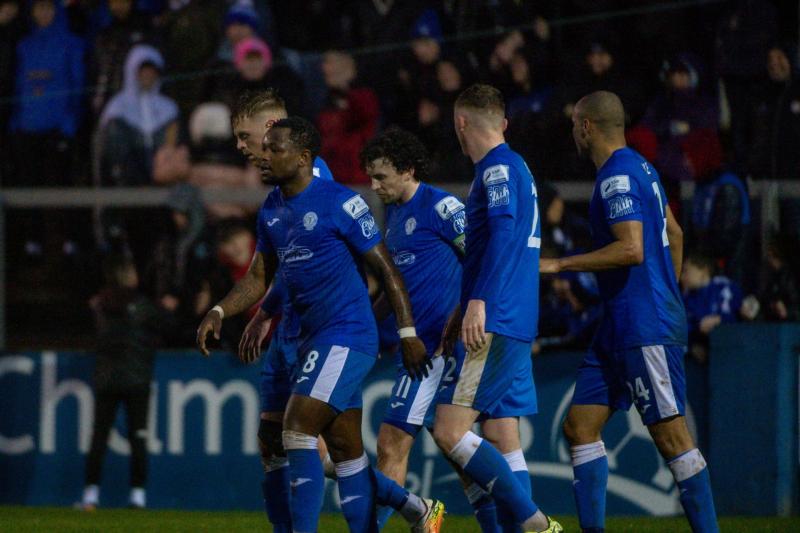 Finn Harps players celebrate with Eric McWoods after his goal

Drogheda United goalkeeper Sam Long earned his side a point with a stunning save in the fourth minute of injury time against Finn Harps in Ballybofey.

Yoyo Mahdy was six yards out having been found by Bastien Hery and with the goal yawning looked set to give the hosts a first home win of the campaign. However, Long somehow kept it out with a point-black save and Drogheda escaped, so manage to stay above Harps in the standings.

Beforehand, both sides had led, with James Clarke putting the visitors one up before Eric McWoods and Mahdy turned things around. With five minutes left, Ryan Brennan managed to squeeze in an equaliser before Long’s heroics.

The visitors made the perfect start with a goal in only the fifth minute. Clarke came from deep and with the run not picked up, sliding prod the ball low into the Harps net when Darragh Nugent had made the chance having got down the inside-right channel.

However, on 22 minutes Harps were level and it was McWoods who tucked home after goalkeeper Long had made a good stop to deny Yoyo Mahdy in a one-on-one situation after Filip Mihaljevic had picked a hole in the visitors’ defence.

Mulreany could do little about the goal he conceded but made a flying save at full-stretch on 25 minutes from a rasping shot from Dayle Rooney. Barry McNamee, at the other end, had half a chance when Long didn’t get full purchase on a fisted clearance before recovering to smother the follow-up from the former Derry City captain.

A minute before half-time, Mahdy was on hand to score his first goal for the Ballybofey club, putting the finishing touch on a fine move between three of the new faces in the north-west. McWoods crossed deep from the right, Mihaljevic’s header was cushioned and Mahdy was only a couple of yards from goal to put Harps 2-1 in front at the break.

Last season under Tim Clancy, Drogheda were the only top-flight side Harps failed to beat, although with only one win in seven this term has proven tougher to amass victories.

Kevin Doherty’s Drogheda had only managed two before their trip to the north-west, although four points from their last two outings - Dundalk at home and St Patrick’s Athletic away - was a more than credible return. Former Harps captain Keith Cowan was part of the Co Louth side’s defence.

Into the second half and Long got down to stop a free-kick from Mahdy from the edge of the penalty area, with Ryan Rainey smashing the rebound high and wide at the River End.

Chances were few and far between although whatever few were being manufactured by Harps and Andrew Quinn was only on the field a matter of seconds when he headed clear off his own line from Mahdy and kept Drogheda in the fight, minutes before Brennan’s leveller.

With Harps struggling to clear, the ball came to the substitute and his shot which took a deflection off Rainey Rainey to nestle right in at the bottom corner for 2-2. And that wasn’t even the end of the drama.