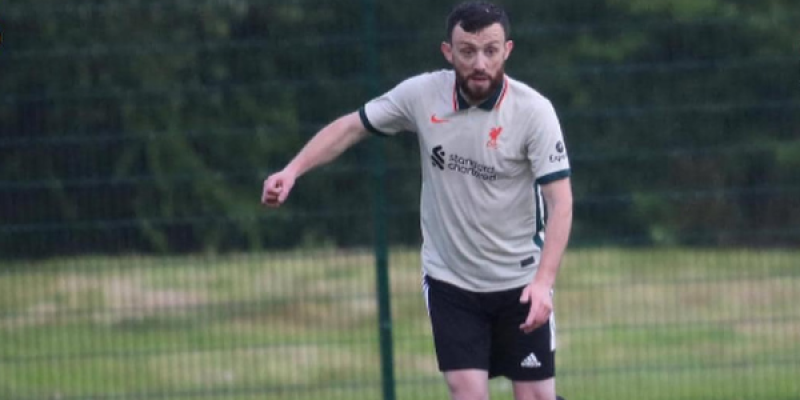 A recently-approved drug has allowed a Letterkenny man with cystic fibrosis have such a new quality of life that he was able to play a football match last weekend.

Marc McCarron played for a Liverpool supporters XI against a Manchester United supporters XI at Letterkenny Community Centre in a game organised to raise funds for Cystic Fibrosis Ireland.

For the first time in 16 years, Marc was able to lace up the boots and play.

“It was fantastic,” he told Donegal Live.

“I was looking forward to playing it for quite a while, since me and Vinny (McLaughlin) planned to do it. I hadn’t ever played with the majority of my friends, some of who I met later in life.”

The last game he featured in was as a substitute for Bonagee United in the Donegal Youth League.

He remembers the day and the moment as clearly now as he did in 2006.

“I came off the bench, sprinted 20 yards and that was that,” he says.

“I was lucky for most of my childhood that I was able to play football. When I got to 16 or 17, I noticed that my breathing was getting harder. From doing very little, I’d end up with a shortness of breath.

“Even little things, like walking up the stairs, would become too much.

“Having to stop playing football was hard. For a while I didn’t even watch my friends playing. It was a bit difficult.”

Cystic fibrosis is a multi-organ disease that primarily affects the lungs and digestive system. A defective gene and its protein product cause the body to produce unusually thick, sticky mucus.

“I missed out on so many things,” Marc said. “Things like birthdays, friends’ events, family functions, I’d not have been able to go to so many because I’d have been in hospital.

“I was lucky as a kid, from I was eight months until I was 19, I wasn’t in hospital at all with CF. It started off once a year, then I’d attend Beaumont Hospital and it got to a stage where I’d be in hospital four or five times a year for maybe two or three weeks at a time.”

This Friday, a charity fundraiser ’65 Holes for 65 Roses’ will be held at Letterkenny Golf Club. His good friend Vinny McLaughlin is the chief organiser and will play 65 holes from early morning morning.

Almost €2,000 has been raised already and you can donate here: https://www.justgiving.com/fundraising/65holesfor65roses

“I joined Letterkenny Golf Club last year when I saw how quick Kaftrio was having a positive effect on me,” Marc said. “Some people will go out and join Vinny for a few holes. Some will play nine holes, some will do 18. I’ll join him for the last 11 holes.

“Vinny mentioned this as an idea last summer and we decided to hold off until brighter weather. The name, 65 Holes for 65 Roses, comes from people who have trouble saying ‘cystic fibrosis’, ’65 roses’ sounds similar.”

That Marc has been able to play again is down to the swift impact of Kaftrio, a triple-combination treatment combining three drugs which perform different functions – ivacaftor, tezacaftor and elexacaftor.

“It has changed so much for me,” he said. “Because of the certain mutation that I have, I had to wait for the drug to have further trials. Last May and June, I spent four out of six weeks in hospital. My lung function was at 50 per cent, but now it’s up to 85 per cent.

“I was able to play football and can go play golf now. Simple things, I can plan ahead. I couldn’t do that before as I’d never be sure if I would be in hospital or not.”

“I don’t get it 100 per cent in all the time. The CF team understands that you have so much to do. For you own mental health, you have to get out with your friends too.”