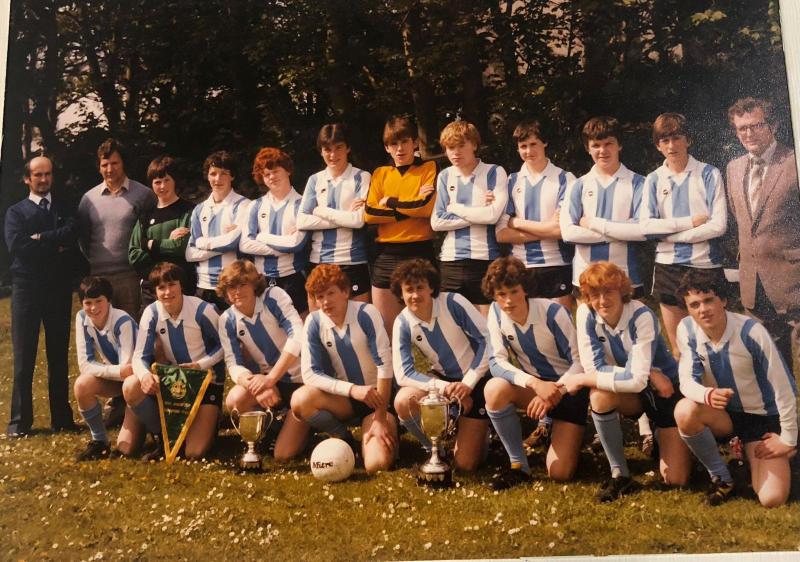 A week after Falcarragh CS had won the FAIS Senior Cup 40 years ago, Rosses Community School, Dungloe completed a Donegal All-Ireland double when they became junior champions, defeating Dublin side Clonkeen College in the final played in Limerick in the U-16 grade.

In a tremendous final, the all-important goal came just before half-time when a George Trimble pass found Stephen Doherty, who after beating the centre half, shot to the net.

Rosses had lost right winger Gerard Carson to injury prior to that, but they held on in a close second half to set off scenes of great celebration.

In the semi-final against St Joseph's from Galway City, the game ended scoreless with Rosses winning 3-1 on penalties and their hero was 'keeper Noel Bonner, who saved three of the Galway shots.

Declan Bonner, Tim McBride and Joe Boyle were the successful penalty takers for Rosses and their two best players on the day were Declan and Noel Bonner.

The team for the final was the same with John Gallagher replacing the injured Carson.

Prior to the weekend, the Ulster finall was played on the preceding Wednesday, when Rosses overcame fellow Donegal side Falcarragh CS with Declan Bonner scoring the only goal and also named man of the match.

After the All-Ireland win, the team were accorded a rousing reception when they returned home on Monday evening from the crossed the Gweebarra and onto Dungloe, accompanied by a huge motorcade. They were welcomed by the Lettermacaward Band at the Gweebarra and accompanied into Dungloe to a special platform on the Main Street outside Sweeney's Hotel by St Crone's Band.

Next month it is planned to have a special 40 year reunion and one of the main organisers is Owen Bonner, who is still attached to Rosses CS as a SNA.

Bonner takes up the story: "The school, under the guidance of Principal, John Gorman, are producing a booklet to commemorate the win. We have gone out and got memories from players, supporters and teachers from the time.

"We are lucky also that there was an Art teacher in the school at the time and he always had a camera round his neck and he had an awful lot of photos from the win, the homecoming and the bonfires. It will be available at the weekend of celebration which will take place on the June Bank Holiday with a golf outing on the Friday with the main celebration on Saturday, June 4 at the school from 3pm with a Mass in memory of the late CP O'Donnell (manager) and Gerard Carson (player).

"There will be a bit of symmetry in the fact that Fr Eddie Gallagher was the school chaplain back in 1982 and he is back in the parish again and will celebrate the Mass.

"There will be presentations and a tree planting ceremony and the celebrations will continue in the town."

Not only did Rosses win out in the All-Ireland that year, but the victory qualified them to take part in a European competition, but it didn't happen for some reason.

"As it turned out, the Falcarragh team that beat in the Ulster final, actually went the following year. I don't know why we didn't go. I think they went to Belgium."

The story behind the win is one of a school that had found it difficult to compete against the other powerhouse colleges in the county like PCC, St Eunan's and Loreto, Milford.

"The school had never won a title and you're going back to Packie Bonner and Denis Bonner and John Andy, super soccer player, but poor Paddy Murray had lost nine finals before we won that one.

"All hard luck stories. But that year, he took Seamus McGarvey and Paul Henry. Paul mentions it in the poem he wrote (which is reproduced on these pages). They were probably the missing ingredients. Paul Henry had gone to Summerhill College (Sligo) and he actually won a schools All-Ireland with Summerhill.

"He took us up to play Summerhill that year in a friendly and it was the only game we lost that year, 1-0. They were actually beaten in the Connacht final that year by the team we beat in the All-Ireland semi, so Paul got the lowdown on them.

"I also remember Paddy Murray saying at our first team meeting. 'Listen lads, we're not going to win Ulster this year, we're going to win the All-Ireland'. I thought it was a strange thing to say, but he obviously had that belief and we all bought into it.

"And Declan (Bonner) would say, sure it was me that won it for yous. I put up clippings in our WhatsApp group and he came back saying, that's me, four man of the matches.

"I would say if you were to look to pick a soccer team for all our time in the school, you would be lucky to get two players for it. We were basically a gaelic team," said Bonner, who feels the success was based on the fact that most of the players were playing for one team, Rosses Rovers.

"We were sort of invincible around that time. We had won U-12, two U-14s, Ógsport. Even though we were U-16, we won the County Minor League. We sort of had the attitude, we didn't care. We had a background of winning," said Bonner.

On what was a very busy week, one of the highlights was winning the Ulster final on the Wednesday prior against Falcarragh CS.

"They had won the Senior Schools' All-Ireland the previous weekend. And they would have had John Cunningham, Sean Ferry, Joe McFadden and Gerry Early who would have played for the seniors and Barry Cunningham was a sub as well.

"There was a great rivalry between us and Falcarragh around that time because there was an awful lot of Rosses boys in Falcarragh."

The team were based in Jim White's Hydro Hotel in Lisdoonvarna for the All-Ireland weekend with the games taking place in the Market's Field in Limerick. 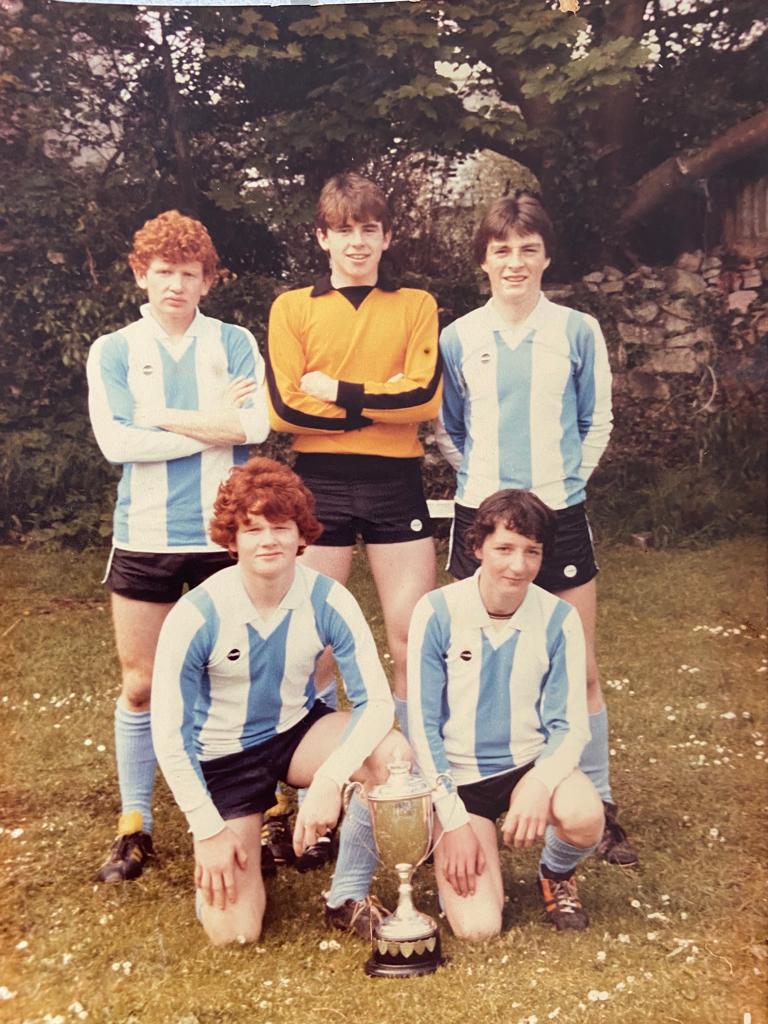 The Bonners on the team - Back: Declan, Noel and Owen. Front Donal and Charlie

Captain of the side was well-known Declan Bonner, who went on to win an All-Ireland SFC with Donegal and is current manager of the Donegal senior team.

"It was the fisrst time ever the school done it and the only time the school won it. There was a good squad of players. We did well to win it. I think the semi-final went to penalties, we won on penalties and then in the final, Stephen Doherty, got the winner.

"Stephen didn't play much after school. His people were fishermen," said Declan.

"Noel Bonner was our 'keeper and he was a big lad. He spent the last 30 odd years in the States. He married an American and his wife died about a year or two ago and he has moved back here now after being away 33, 34 years."

Indeed, there were plenty of Bonners in the side with Declan's younger brother, Donal, one of the forwards.

"Out of the back five there were four Bonners and the only nearest relative was myself and Charlie Bonner, Charlie would be a second cousin. You had Owen at centre half along with myself and you had Noel in goals.

"You had a guy called Joe Boyle at right back; he was a Scotch guy who had come over and started school in Dungloe.

"Timmy McBride would have gone on to play in the early Derry City side that got into the League of Ireland. Tony's (Boyle) brother, Ben was playing and he would have been attached to Galway United for a number of seasons.

"You had another Scotch guy, George Trimble, he was in the middle of the field.

"It was a memorable time, because it was the first," says Declan.

Bonner missed out on an Ulster Minor League final because the game clashed with the Donegal v Monaghan final (which Donegal won) on the same day as the All-Ireland semi-final.

"The Ulster Minor League final was on on the Saturday and Liam Reilly was in charge but we were in Limerick with the school."

It was an exciting time for schools' soccer in Donegal with two All-Ireland titles coming to the north-west in the space of a week. 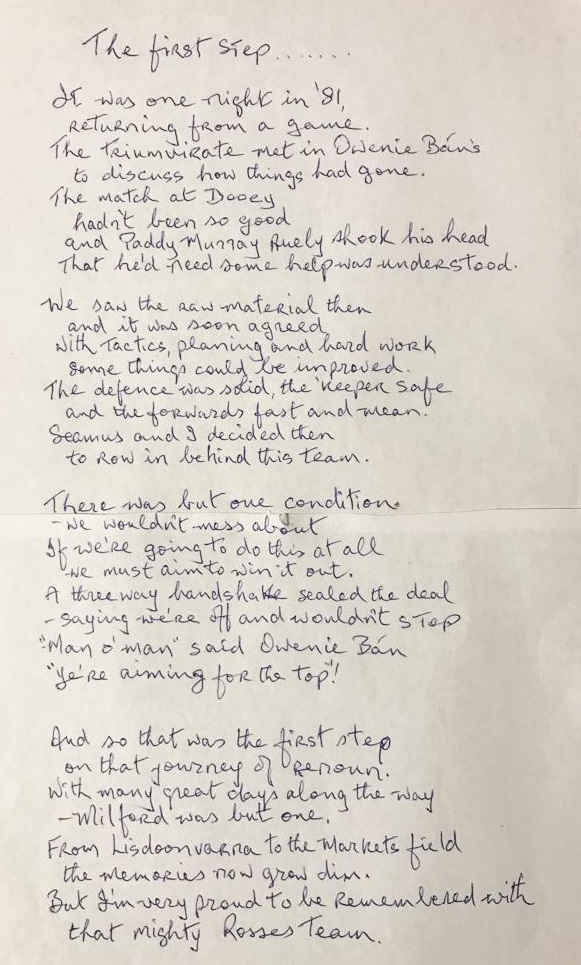 The poem  about the win penned by Paul Henry