Timing everything for Glen Harron and Copany Rovers 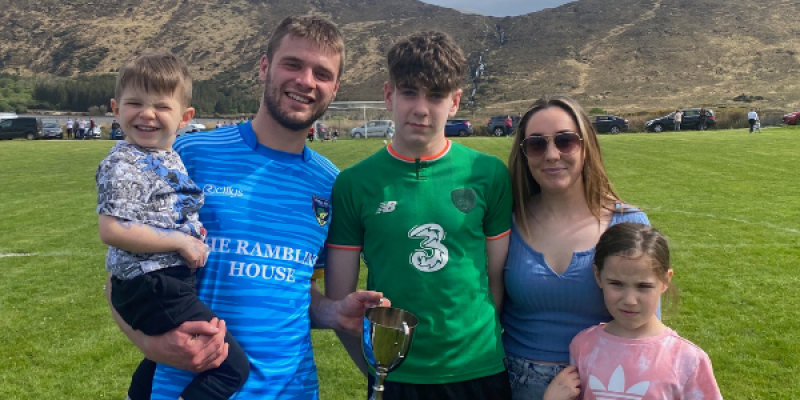 Copany Rovers goalscorer Glen Harron with his family after the game.

He’s been doing it all season, but Glen Harron popped up on Saturday when it mattered most.

With the Old Orchard Saturday League Division 2 title up for grabs between its two remaining protagonists, Harron provided the champagne moment.

“It was a great ball in,” Harron said.

“I just tried to time my run.

It’s a great result and hopefully we can keep going.

“It means a lot. This is the first time in a few years that I’ve played. It’s a brand new team and it’s nice to win the League.”

Harron’s father, Roy, scored Copany’s first ever goal in the Donegal League, back in October 1988.

Thomas Given, now 51, was there too in ’88 and played alongside Kilpatrick at the heart of Copany’s rearguard.

Copany won Sunday League Division 2 crowns in 1991 and 2014 and recently switched to the Saturday League.

The weekend’s success came after a tough season, their fingers only tightening on the silverware when Dunlewey sub Lorcan Gallagher headed against the crossbar in the 96th minute.

It’s a Given: Copany Rovers’ marathon man reflects on 34 seasons

“There were a lot of nerves going at the end,” Harron, Copany’s top scorer, says.

“Boys were on the edge of their seats.

“It was tough. They had us under a lot of pressure at the end. I thought we might have lost it, but we stuck it out and held on for what we needed.

“We played Dunlewey on the first day of the season and it was a 2-2 draw.

“There was nothing in it that day and it could have been any result in this one too.

“It was a great League. We’ve been chasing them all year and we knocked them off at the last one.”