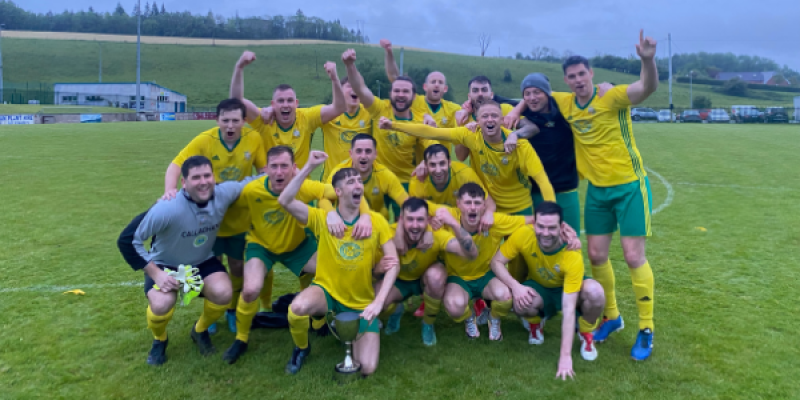 Tony McNamee struck 12 minutes from the end to secure a memorable Cup treble for Bonagee United on Tuesday night.

Gerard McGranaghan to step down as Kilmacrennan Celtic manager

Grabbing their third piece of silverware was far from straightforward with Monaghan twice levelling, James Hurley and Jamie McCarey cancelling out a brace from Micheál Doherty.

Bonagee took the win as McNamee shot across Corey Smith and into the net after Jack Parke’s superb pass got the former Finn Harps attacker into the penalty box.

Bonagee arrived in the Oriel county intent on collecting a clean sweep of the cup silverware and broke the deadlock after only eight minutes. Micheál Doherty weaved his way into the area before firing past Smith.

Monaghan were out of action for over a month since concluding their League campaign and the concession of an early goal arrived like a dagger through their arteries.

Monaghan fashioned a decent opening on 25 minutes, but Edward Otesanya’s acrobatic effort, from an Oisin Treanor cross flew wide of the target.

The Mons were incensed when, just before half-time, referee Colin Halligan, upon consulting with his assistant, reversing his decision to point to the spot when Niall Cassidy went to ground. Monaghan drew level just 62 seconds into the second half when Turley finished after Bonagee failed to deal with a ball into the area.

The stretching Deano Larkin was inches from connecting with a Mark Harkin cross soon after, but Bonagee did regain the lead just after the hour.

Doherty converted well after Larkin did well under pressure to slip him in on goal.

Monaghan were dramatically reinstated to the competition when Cockhill Celtic were found to have fielded an ineligible player win their semi-final win over the USL’s newcomers. The final had originally been pencilled in for May 14, but news broke that morning at the 11th hour that the game had to be postponed, pending a probe into the semi-final.

Monaghan certainly didn’t ur up just to make up the numbers but McNamee - who saw a first-time effort fly over late in the first half - tucked in what proved the winner.

The home side’s woe was compounded three minutes later when Niall Cassidy was sent off, seeing a straight red for lashing out at Doherty.

McNamee was denied by Smith as Bonagee went in search of a fourth. In the end, they didn’t need it. Cup number three was soon winging its way into their possession.