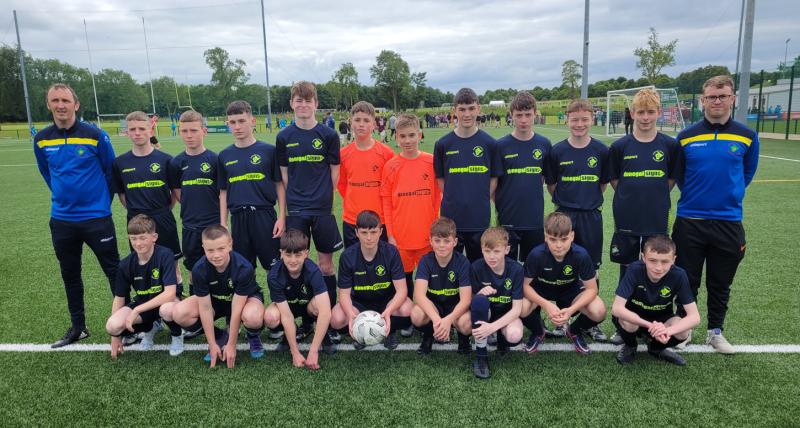 The Inishowen squad at the Kennedy Cup in Limerick

Inishowen were drawn in a tough group in this year's Kennedy cup pitted against Waterford, Mayo and West Cork.

Inishowen began their Kennedy Cup campaign on Monday evening  with a tough game against a physically stronger Waterford side.

After an even opening  Waterford opened the scoring in the fifth minute with a superb 20-yard strike from  Mitchell finding the bottom corner past Odhran Douglas at full stretch. 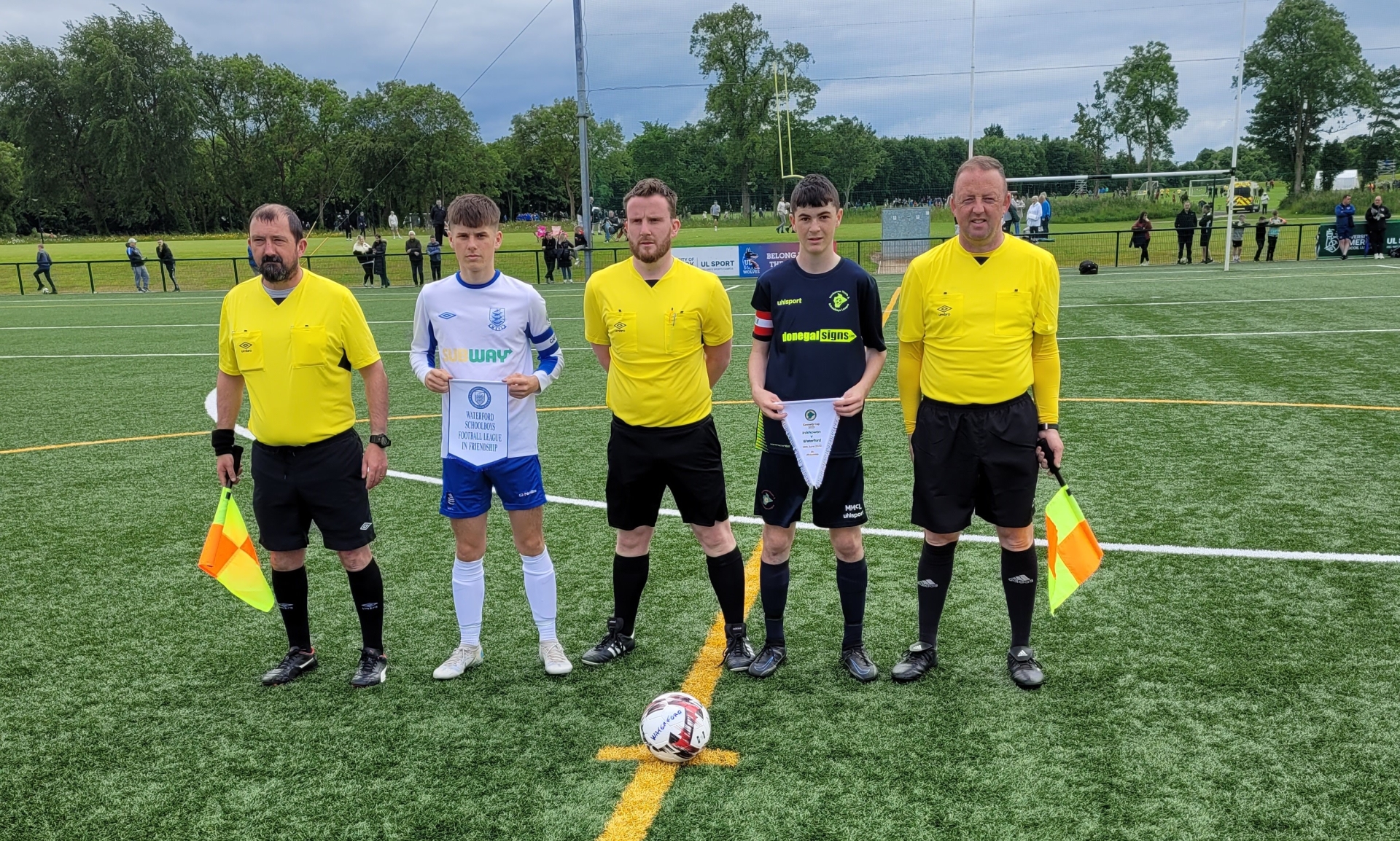 Inishowen responded and scored a superb equaliser minutes later. Mark McLaughlin burst through the middle of the park before checking back  and spreading the ball to Billy Hume on the left who slipped a pass into the path of Olly Coyle to drill left footed to the net past the advancing keeper.

Waterford pressed  Inishowen back and in the 16th minute Douglas made a superb save to deny Cormac Spain. Just before the break an unfortunate slip in midfield allowed

Waterford’s powerfully built number six Oladiti managed to gain possession and advance before finishing superbly to the top corner from the edge of the area.

Inishowen struggled in the second half but battled superbly and an unfortunate own goal from a  corner saw them fall further behind. On 47 minutes a brilliant one handed save by Douglas  but the ball fell to  McCarthy who hammered home the rebound to make it four one.

Inishowen had the final chance of the match with a superb move when Peter McLaughlin released Joe Lavery on the right and he cut the ball back for substitute Adam McColgan whose goal bound effort deflected off a defender and over the bar.

On Tuesday afternoon, Inishowen faced Mayo in a crucial game for both sides who had suffered defeat on Monday.

It was Mayo who started the better and on 10 minutes Nimai Osio made a fine save low to his left at the expense of a corner from Devaney. 
However from the corner the unmarked Devaney headed home to open the scoring. They doubled their lead minutes later after Langan nipped in in front of a defender to convert Henaghan's cross from the left. It got worse for Inishowen on 24 minutes when Langan got in behind the Inishowen defence to head home from close range.

Inishowen battled and reduced the deficit on the stroke of half time after Mark McLaughlin collected a corner  kick and returned the ball which squeezed in at the near post.  But a physically stronger Mayo side ensured there would be no comeback and added three  second half goals.

Inishowen  kept battling and Olly Coyle had the final chance when his shot on the run in the right channel drifted just wide.

Then on Tuesday evening, Inishowen finished their group campaign against West Cork.

In a superb first half Inishowen should really have been further ahead than the two goals they scored. On nine minutes a superb Cian McNamee pass sent Olly Coyle clear and his low effort was superbly turned round the post by Hennigan in the Cork goal.

From the corner Sonny Bonner rose highest but was unlucky to see his header crash off the bar. Good work by Ronan McLaughlin then found Coyle who cut inside a defender but again Hennigan was equal to the task before Jude McDaid saw his effort come back off the post. Inishowen took a deserved lead on 25 minutes when Billy Hume intercepted a crossfield ball and fed Coyle whose first time lay off back to Hume saw the winger unleash a stunning 25-yard effort to the top corner.

Minutes later it was two after great work from Bonner following a corner saw him poke the ball through for Joe Lavery to finish calmly.

Cork replied and on the stroke of half time Sweeneys superb free kick crashed off the angle of post and bar which allowed Inishowen to break forward with McDaid releasing Coyle on the left and he fired across goal and just past the post.

West Cork started the second half on the front foot and five minutes in another Sweeney free came off the angle of post and bar but this time Hegarty was on hand to drill the rebound in off the underside of the bar.

On 39 minutes they were level when the Inishowen defence failed to  deal with a long ball and Hegarty hammered first time past Odhran Douglas to level the tie.

Play swung from end to end for the remainder of the game with no clear cut chances. The best chance of a winner fell to Inishowen when great work by Peter McLaughlin on the right saw his cross find Adam McColgan who just failed to direct his header on target. Inishowen suffered blows when both John Eyre and Gavin Bradley picked up injuries in this game.

In beautiful sunny conditions on Wednesday morning on the showcase pitch,  Inishowen  produced a heroic performance to deservedly advance to the trophy semi final after seeing goalkeeper Odhran Douglas red carded after only nine minutes. Despite this setback, Inishowen continued to press and an LJ Farren free almost caught the Tipperary goalkeeper out but he recovered to gather on the line.

Billy Hume then saw an effort well saved before a brilliant outside of the right foot effort from twenty yards . North Tipp had the final effort  but Nimai Osio gathered well  to leave it scoreless at half-time. 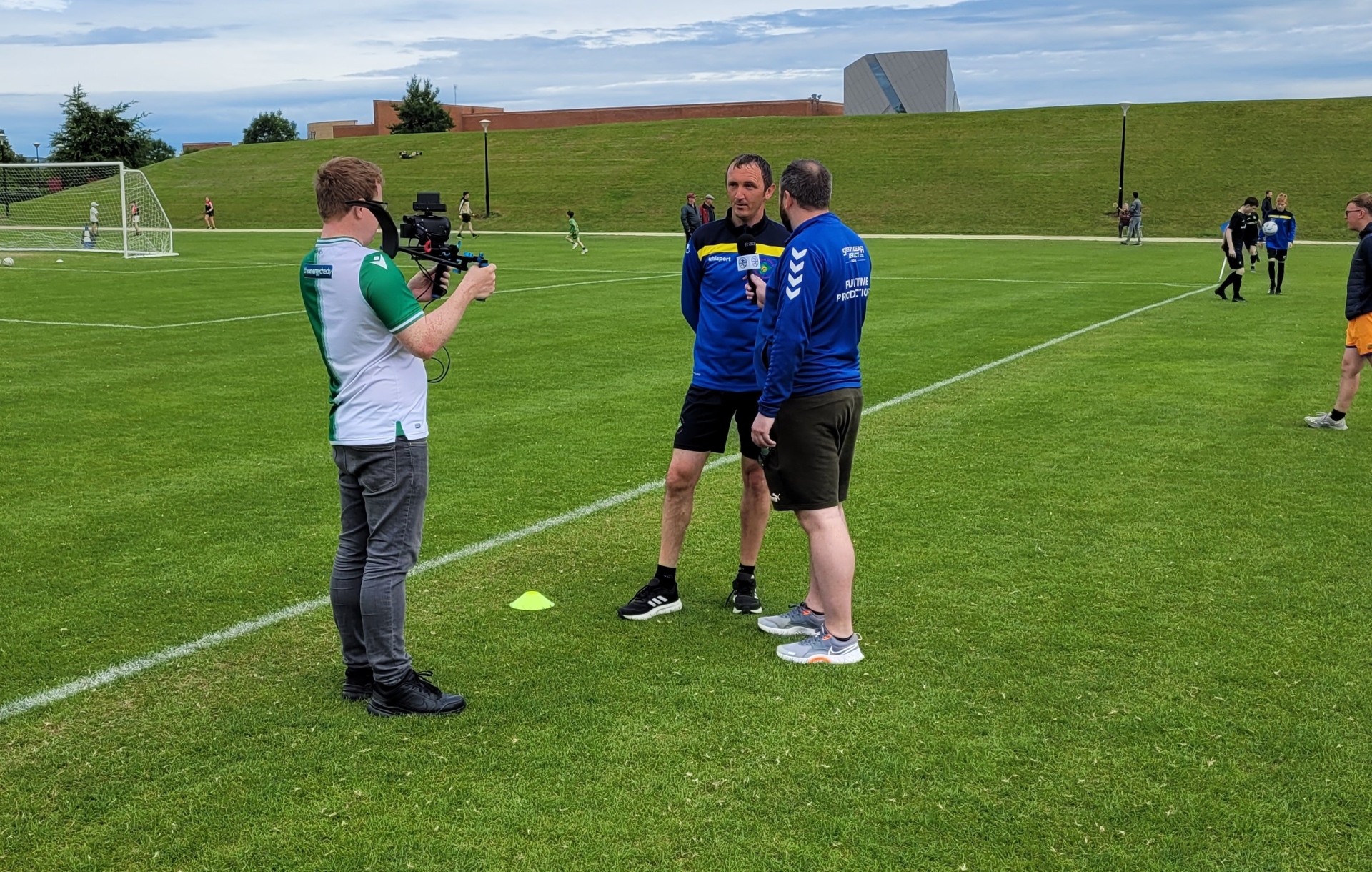 Inishowen continued to press on the restart and after a Peter McLaughlin cross came off a defender Joe Lavery ‘s header crashed off the bar. Midway through the half LJ Farren advanced from the back and unleashed a stunning strike towards the top corner but the North Tipp keeper made a brilliant one handed save to turn it around the post and one would be forgiven for thinking it was just not going to be our day.

But three minutes later the tireless Olly Coyle collected a Ronan McLaughlin pass evaded a tackle on the edge of the area before hammering a brilliant right footed effort to the top left hand corner of the net.

Tipperary launched a lot of long balls forward but the Inishowen defence with Jack Lee, Ronan McLaughlin, Sonny Bonner and the aforementioned Farren were superb throughout and keeper Osio confident in all his handlings. 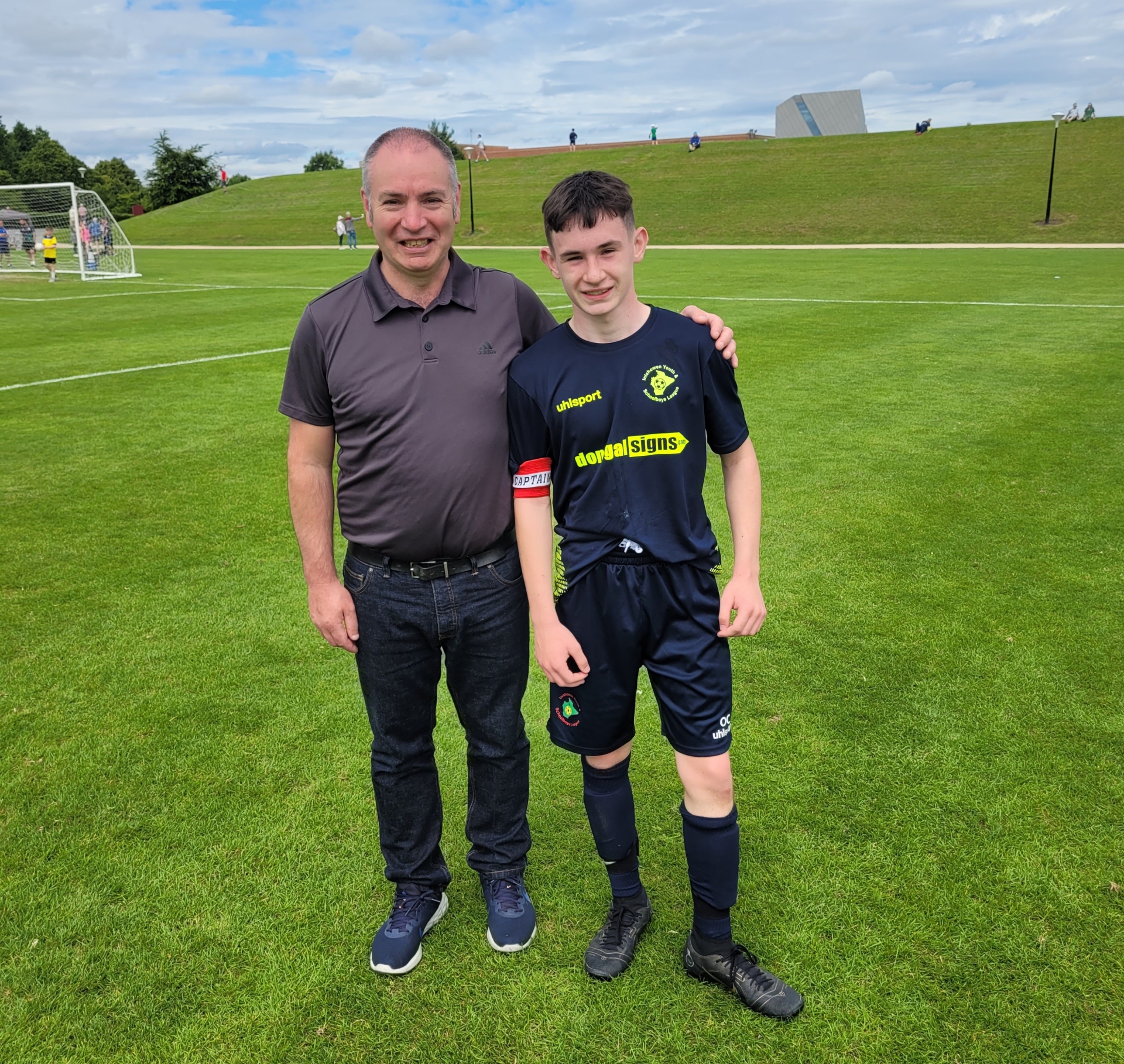 Indeed  Inishowen almost added a second after Peter Mclaughlin was beaten to the ball by the advancing keeper and Joe Laverys first time effort drifted past the post.

Inishowen had their chances and were the better team overall but a huge deflected goal saw them bow out. Inishowen created a great chance on eight minutes after Olly  Coyle released Billy Hume on the left and while his effort beat the advancing keeper  a defender got back to clear the ball off the line. 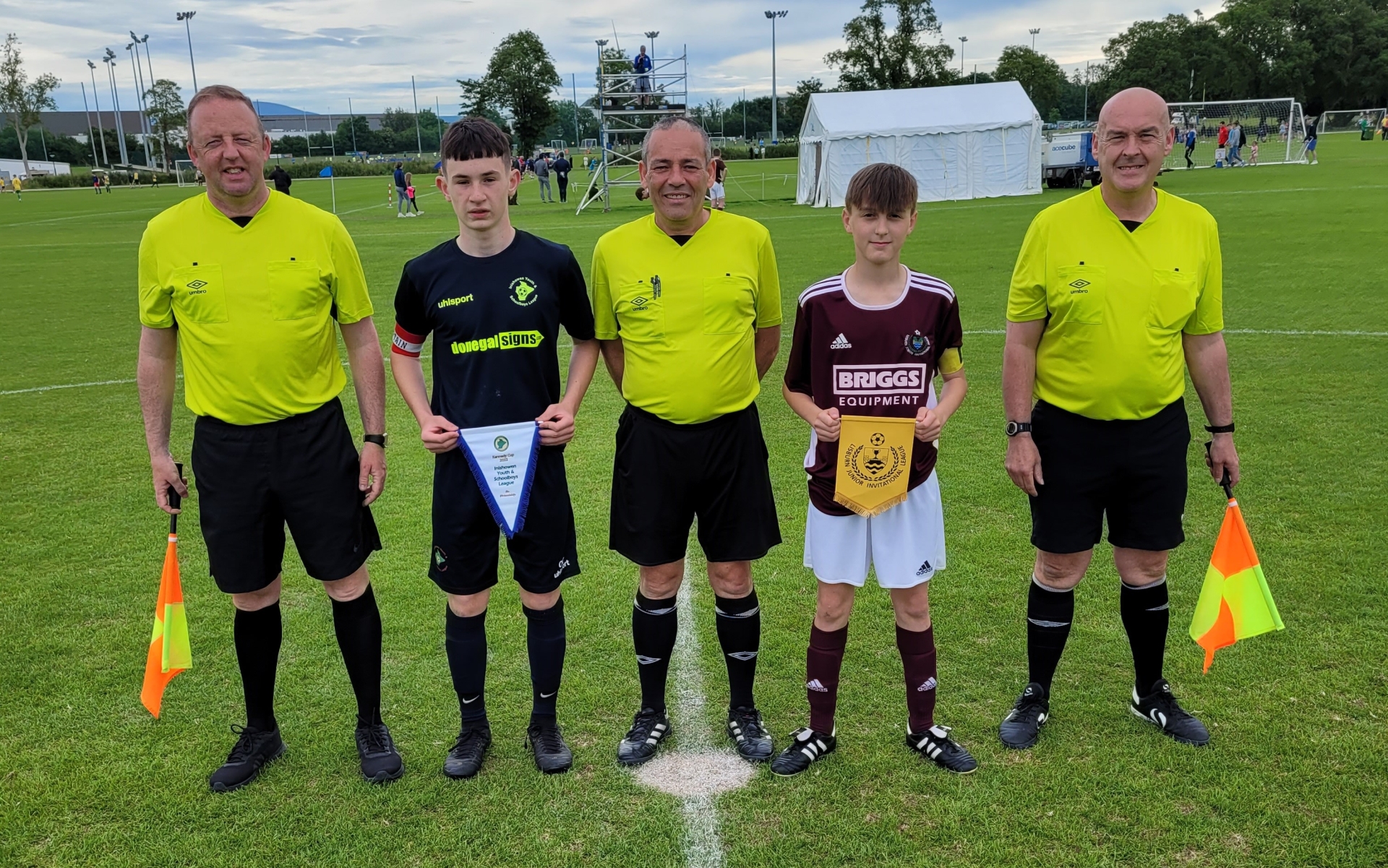 Four minutes later Lisburn took the lead when a speculative effort from 20 yards cannoned off a defender and looped up over Nimai Osio and into the net. Before the break Inishowen had two further chances with Billy Hume’s angled shot well saved before a corner broke to Sonny Bonner but his shot on the turn was saved at full stretch.

Inishowen continued to try and get back on terms after the break and when Coyle lifted the ball over the Lisburn defence Hume  saw his effort saved from 16 yards.

Coyle then advanced from midfield but fired straight at the keeper. Another Hume run into the area on the left saw Inishowen appeals for a penalty waved aside and the ball broke to substitute Adam McColgan but his effort sailed over the bar. In a rare forway forward Lisburn had an effort clip the outside of the post as Inishowen committed men to attack.

In the final chance a short corner to McColgan on the edge of the area saw him step inside but his powerful effort was beaten away and the final whistle sounded shortly afterwards.

There were a lot of tired legs and minds in this play off game on Thursday afternoon in very warm conditions.

Inishowen were unlucky after a short corner was played to Adam McColgan whose inswinging effort crashed off the bar in the fifth minute. But West Waterford/EastCork broke from this and opened the scoring with Tom Power  racing clear to drill home. Inishowen equalised on 13 minutes after a brilliant Joe Lavery run on the right ended when his effort was blocked but Jude McDaid picked up the loose ball and fired a stunning effort to the top corner  from 14 yards. 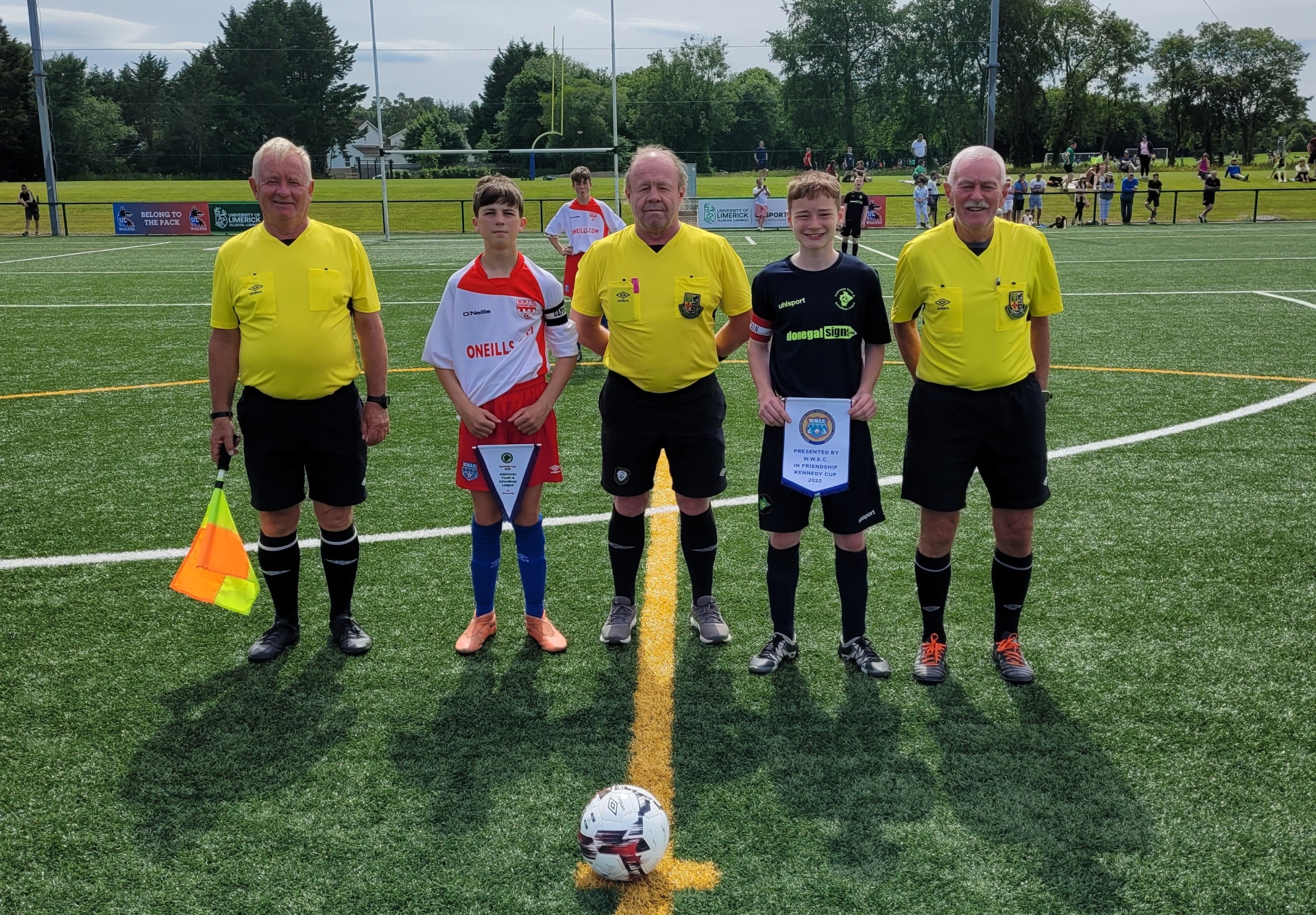 Inishowen dominated the remainder of the half but the final ball let them down too often and on the stroke of half time Odhran Douglas had to be alert to turn McSweeney's effort around the post.

It was a  similar pattern in the second half with Jack McGeough firing over, Joe Lavery hitting the side netting and Olly Coyle and Darragh Kerrigan seeing long range efforts saved. Then in the closing minutes WWEC almost nicked it when Powers' free-kick came off the bar. But in the penalty shootout Peter McLaughlin, Olly Coyle, Adam McColgan, Cian McNamee and Jude McDaid all kept their nerve to convert with Douglas producing one superb stop to see Inishowen edge it.

Overall
A tough week for the players where they performed creditably in all games they played in and played some excellent stuff. Lessons will have been learned and it is a great experience for any young player to have. A big word of thanks to all the parents for their support, manager Oliver and his coaches Evan and Patrick  for their immense contribution this week and every week since last September.

Also to the players for their excellent behaviour on and off the pitch all week. They were a credit to their families, club, league and above all themselves. They now  have the Foyle cup to look forward to in July.