‘Celtic Minded 5: Essays on Celtic Football Culture and Identities’ was launched in Letterkenny, with Termon-based author Patrick McMenamin and Letterkenny native Jonathan Foley - who is a contributor to the book - the local speakers 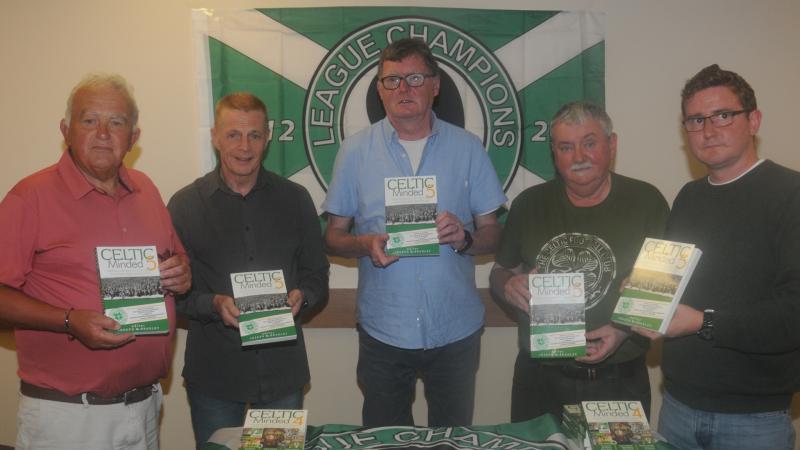 The latest in the ‘Celtic Minded’ series of books was officially launched in Letterkenny on Tuesday evening.

With such a strong link between Donegal and the north-west as a whole with Celtic, it was the first time any of the series was launched in the county.

The editor of ‘Celtic Minded 5: Essays on Celtic Football Culture and Identities’ is Dr Joseph Bradley, who is now employed as an Associate Tutor of Sport Sociology at the University of Edinburgh, while also a member of the Edinburgh Critical Studies in Sport Research Group. 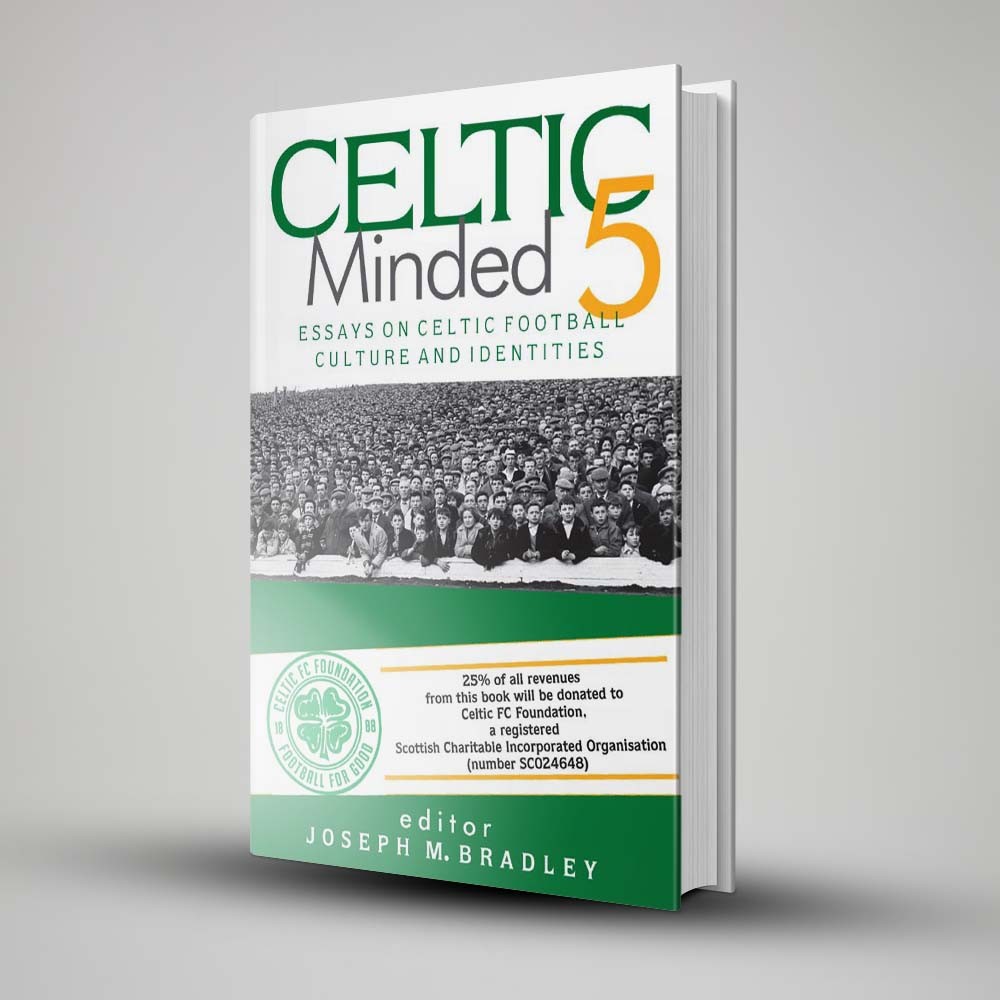 The first four instalments of the book have sold in the region of 20,000 copies to date, or, as Dr Bradley put it in terms of his own reward for what is essentially a labour of love, “about 20 pence an hour.”

For each copy of the book sold, 25% of its revenue is given to the Celtic FC Foundation, the charitable wing of the club.
Foley, who qualified as a secondary school teacher of English at University of the West of Scotland before teaching in Edinburgh, holds a Masters Degree in Irish Political History from the University of Ulster.

Since returning home in 2017, he, along with members of his local supporters club, has worked on two publications for the Celtic FC Foundation for the Letterkenny visits of former manager and captain, Brendan Rogers and Scott Brown respectively.
In 2019, Foley played a charity match at Celtic Park alongside former Celtic players Kris Commons, Simon Donnelly, Stephen McManus and Tom Boyd, with his contribution later donated to Donegal Down Syndrome.

His essay ‘Celtic Football Club: The emotional and spiritual connection to County Donegal’ is one of those published in the new book.

“I got the chance to join the ‘Celtic Minded’ series a couple of years ago and being a proud Donegal man I knew it was something I wanted to do but I wanted to do something that hadn’t really been done before,” Foley said. “So the decision was to try to get something that people can understand, but at the same time something they didn’t really know before. I put the focus on the social history and the migration, the links between Donegal and the west of Scotland. It’s a unique history.

“Even now, there remains a huge quantity of people boarding buses in the middle of the night from the Rosses, Gweedore, Gortahork, Falcarragh, Killybegs, Donegal Town, Ramelton and Letterkenny, to Celtic Park on any given matchday.” 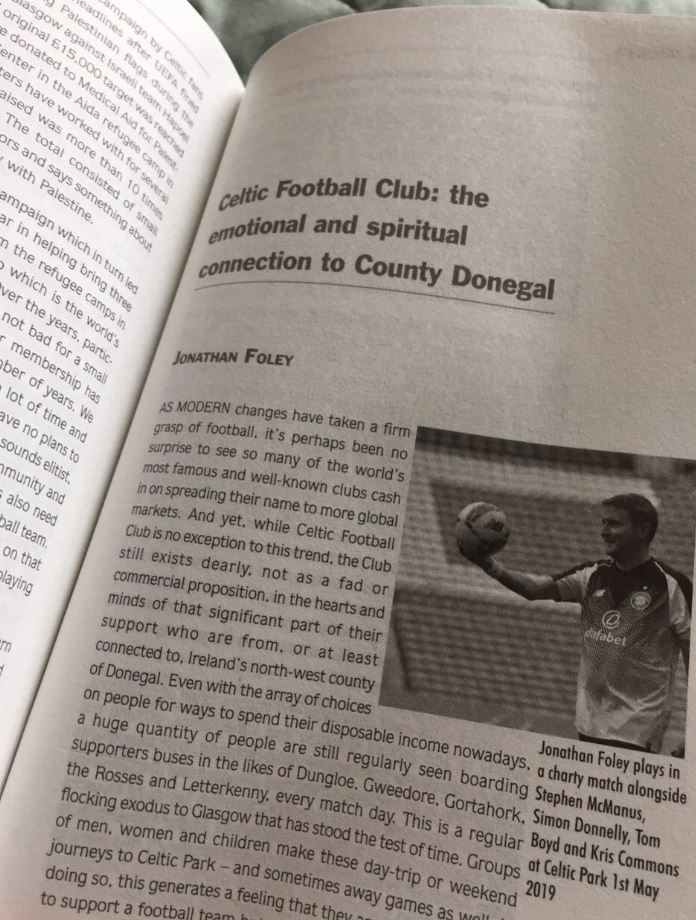 McMenamin’s first game at Celtic Park was when Celtic faced the mighty Benfica in the European Cup in 1969 and he was there at Hampden Park in 1970 when Jock Stein’s side defeated Leeds United in the second leg of the 1970 European Cup semi-final in front of a record attendance of 136,505, which still stands today.

During the Troubles, McMenamin was a political-prisoner in Long Kesh and moved to Donegal afterwards. After taking a redundancy, he returned to university and qualified as a secondary school teacher with a Masters’ Degree in History from NUI Galway in 2011.

During the Covid pandemic, he published two books and has another, on his life with Celtic, as a work in progress. A new book ‘Armed Struggle to Academia’ was published earlier this year.

“Being ‘Celtic Minded’ is a state of mind,” McMenamin said. “Over the 20 years since Dr Joe started this series, he has spoken to people from all walks of life to contribute, whether they're a banker, a binman or a professor. The link is Celtic.”

Opening speaker, Dr Aidan Donaldson, is a regular contributor to the Celtic Minded series. He works as an Educational Consultant to the Catholic Schools Support Service for the Diocese of Down and Connor. The Belfast native has published numerous books already on subjects such as philosophy, the foreign missions, Catholic education and theology.

“We’re delighted to have Dr Joseph coming to Letterkenny, along with Dr Aidan and of course our own local representation in the form of Paddy and Jonathan, who we are very proud of, and who has done some great work for us here,” Denis O’Donnell said.

“There’s been links with Donegal and Celtic since its inception. Joseph McGroary from Mountcharles was on the first ever committee of Celtic, which was formed in 1887 and was buried in Frosses, having died in 1937. There’s always been a huge link. We’ve been taking people to Celtic thanks to the work of the late Paddy Sweeney from Dungloe. It’s a family.”

Celtic Minded 5 is a book that fully recognises and pays respect to Celtic FC and its supporters’ charitable origins and modern identities. Thus, for each copy of the book sold, 25% of its revenue will be given to the Celtic FC Foundation.

The Foundation’s “ethos is typified by a determination to create opportunities for society’s most vulnerable and marginalised groups – principally, we address root causes of poverty by equipping individuals with the tools and means to reverse inequality Charity is fundamental to Celtic’s identity, and as the Club’s charitable arm, we recognise the enormous importance and responsibility of honouring the legacy of our founding father, Brother Walfrid.”