Shane Blaney's name was listed wrong on team sheet last week as Sligo Rovers won at Motherwell's Fir Park and although its led to the Letterkenny native getting a new nickname in the last week, the goal remains the same 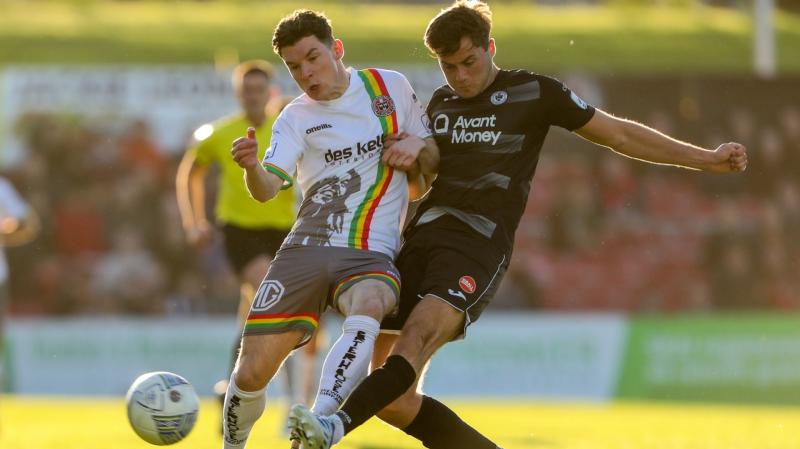 Shane Blaney - or ‘Blaney Shane’ as he has become known in the last week - is savouring Sligo Rovers’ run in Europe and tonight at the Showgrounds they aim to finish off a job they started superbly last week.

John Russell’s side left Fir Park with a 1-0 victory over Motherwell of the Scottish Premiership in their Uefa Europa Conference League second qualifying round first leg tie with Letterkenny native Blaney receiving plenty of complimentary texts.

“I’m called Blaney Shane now everywhere as my name was wrong on the team-sheet,” the central defender said this week.” “Every text I got is ‘well done Blaney Shane’. All my mates and family.”

Joking aside, it was one of Sligo’s most famous results, perhaps only topped by the 2-1 victory in Trondheim against Rosenborg in the Europa League i 2014. Eight years ago, the Norwegian champions overturned that first leg deficit to win 3-1 in the return leg and a Motherwell comeback isn’t far from the realms of possibilities.

“They’re obviously at a higher level, they’re a big club,” Blaney said. “They’ve got players who can hurt you, they’ve got clever midfielders, the ball moves a lot quicker. You have to be very alert, you can’t switch off at any time, obviously they’re going to have the bit between the teeth coming here. We need to be right at it from the start.”

Aidan Keena is well-known to football followers in the north-west, having hit the net five times in Sligo’s two home fixtures against Finn Harps this season. Having had spells at Heart of Midlothian, Hartlepool United, Queen's Park, Dunfermline Athletic and Falkirk, plenty in Scotland would know him too, although he still tucked up the only goal last Thursday.

Growing up a Harps supporter, 23-year-old Blaney admitted - when pressed on the matter - that European nights wouldn’t be something he’s overly familiar with.

“Walking out, the atmosphere was brilliant,” Blaney said of Fir Park. “There were nearly 8,000 there. It’s the games you want to be in as a footballer. These European games, the first legs you’re kind of sussing each other out a bit in the first 15-20 minutes. Once we got our foot down on the ball and grew into the game I think we saw a lot more in the second half, we were a lot more comfortable and we knew we were well in this game.

“The Sligo fans were brilliant. As a player when you’re out there, you’re out there. It’s just like any other game. You’re going through your routine, you’re focused on the task at hand. Personally I don’t get carried away with crowds or atmosphere, it’s just the game for me.”

Blaney played for Illistrin and Donegal Schoolboys and whilst at Harps in 2017, made three senior appearances, having represented the Ballybofey club's U-17 and U-19 sides. He joined Doncaster Rovers in 2018 and played on loan at Tamworth, Grantham Town and Blyth Spartans before returning to the north-west with Sligo last year.

“These are the games we want to be in,” he added. “It’s the reason when I came to Sligo, European football was a massive factor and these big games are the games I want to be playing in and hopefully making a name for myself.

I liked the thought of Sligo and European football. That was the main factor. It was where I wanted to be once I thought about it. The league is the same. I’m trying to get as many games under my belt as I can and play as well as I can.”