Watch: Sligo's Shane Blaney on wonder goal free-kick: 'I knew it was coming' 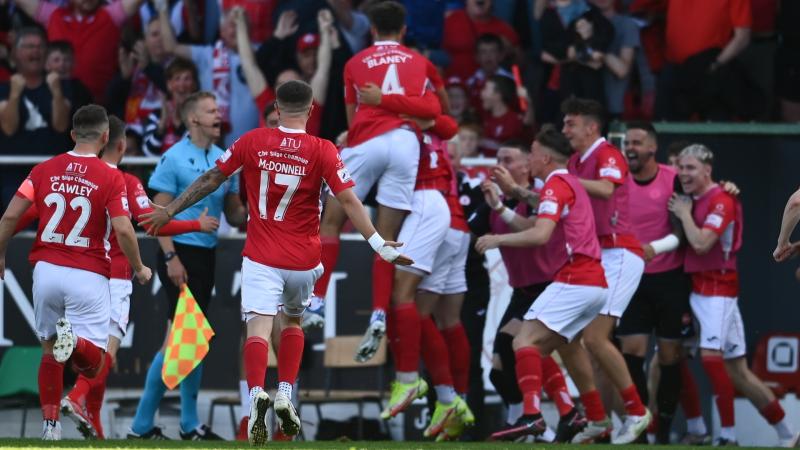 Alan Foley at the Showgrounds

Shane Blaney insists Sligo Rovers are keeping their feet firmly on the ground following their impressive 3-0 aggregate win over Motherwell in the Uefa Conference League second qualifying round.

Following their 1-0 win at Fir Park in the first leg with Aidan Keena scoring the only goal, John Russell’s Sligo were comprehensive 2-0 winners at the Showgrounds last night with Letterkenny native Blaney opening the scoring with a textbook free-kick before Max Mata’s second in the last minute. Luke McNicholas, who was on the books of Finn Harps, put in a competent shift in goal for the home team.

It means Sligo - who defeated Welsh side Bala Town FC in the previous round - are now in the last of the qualifying rounds against Norway’s Viking FC, who edged their way past Sparta Prague of the Czech Republic 2-1 on the night and 2-1 on aggregate with a 92nd minute winner from Maï Traoré.

The Showgrounds has met the Uefa criteria for the third qualifying round, which is the second leg of the tie on Thursday, August 11, with the sides  opening clash in Norway this coming Thursday.

What a strike, Shane Blaney!

A 2-0 aggregate lead for @sligorovers

A dream start at The Showgrounds!

“I had one in the round before against Bala, which clipped the top of the bar,” 23-year-old central defender Blaney said of his free-kick. “I’ve been doing them a lot in training so I knew it was coming anyway. It’s the best [goal I've ever scored]. There’s nothing anywhere near it. We knew coming into the game it was going to be a hard game and that to a man they’re a massive team playing at a higher level.

“They’ve clever players that we knew we had to be switched onto. We defended from the front very well and every man gave everything. We left everything on the pitch and that’s all that was asked of us. Luckily it got us a 2-0 win and another clean sheet.

“We set up really well and they’re in pre-season. We stopped them over there and the longer the game went on the more comfortable we got. We knew that we could have a proper go. You could see it in the second half of the first leg.

“We were getting a foot on the ball and got a bit of possession. I don’t think it’s a bad performance from them. We just defended reality well in both legs - from the front with Aidan Keena and Max Mata when he came on. It was brilliant.”

Sligo are back in domestic action on Sunday when they face Wexford Youths at home in the FAI Cup and Blaney insists that’s the priority before any talk of the Conference League.

“It’s an unbelievable night and a class night for the club,” the former Finn Harps defender said. “We’re straight in for another meeting and we’re all set for a cup run. I want this club and this town to have a cup run and Sunday is massive for us.”