Runners-up in the 2021 competition, Bonagee United are back in the final of the Colin Breslin Youth Cup after a hard-earned win over Ballybofey United 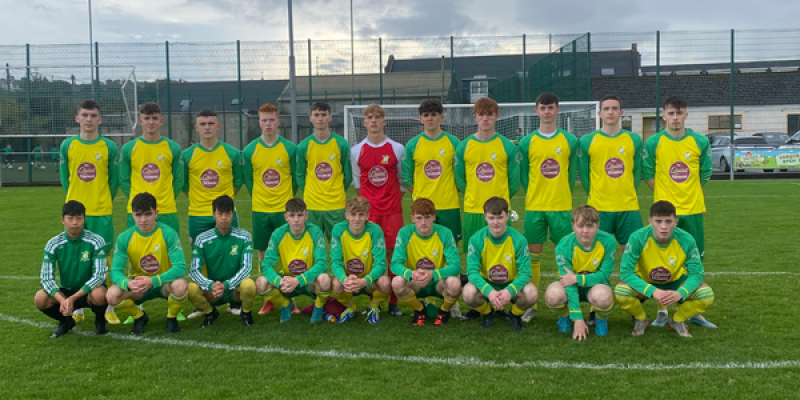 Bonagee United advanced to the final of the Colin Breslin Youth Cup after getting the better of a never-say-die Ballybofey United on Wednesday evening.

Bonagee, the Donegal Youth League champions, perhaps made life rather more difficult for themselves than they ought to and it meant that Gary McCrory’s men had little by the way of breathing space at the end.

Ultimately, goals from Lorcan Harvey, Josh Maxwell and Leon Boyce saw them through, but Ballybofey remained with a chance thanks to strikes by Daithi McMahon and Noah Reid.

Ballybofey caused all sorts of panic in the Bonagee rearguard in the early moments with McMahon particularly lively.

Matthew Gibson, the Bonagee goalkeeper, had to be on alert to stave off the pressure.

Bonagee settled and Caolan Fox shot wide of the far post with Boyce prodding narrowly wide from a corner.

Harvey went close, but fired off target after taking receipt of Eoghan Doherty’s delicate ball over the top.

After Zak Breen thumped into the side netting, Bonagee - by now well on top in the possession stakes - took the lead late in the half when Harvey finished well after the ball fell to him at the far post.

Ballybofey were level on the hour. McMahon’s persistence paid off. Having seen his initial effort touched onto a post by Gibson, McMahon followed in to restore parity.

It was 3-1 on 78 minutes. Adam Carr was denied by the crossbar, but Bonagee recycled and Boyce turned home from McCrossan’s delivery.

However, Ballybofey hit back immediately with Reid neatly applying the finish after a diagonal ball caught Bonagee napping.

Gibson had to be on guard to save from Karl Doherty and the hosts held on to book a spot in the September 21 final against Kilmacrennan Celtic at The Diamond Park.