‘It’s all unreal’ - Noah Barrett savouring a season to remember

Since returning from Finn Harps, Noah Barrett has captained Bonagee United to a Donegal Youth League double and featured in the FAI Senior Cup 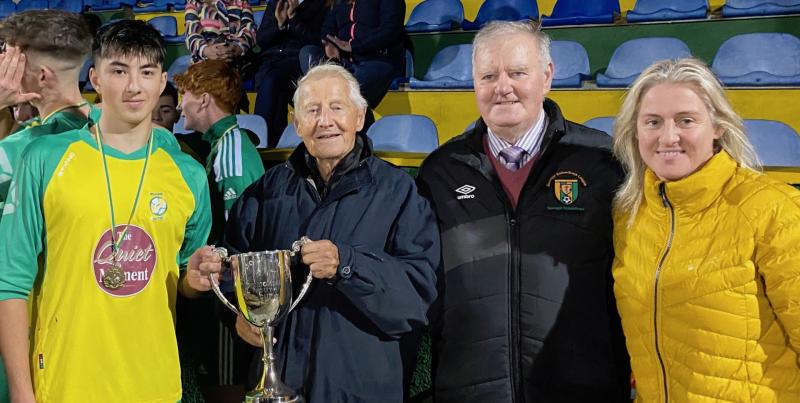 Noah Barrett of Bonagee United is presented with the Colin Breslin Youth Cup.

Noah Barrett has had quite the year - and he’s not done yet.

After returning from Finn Harps to Bonagee United, Barret captained the Dry Arch club to a first ever Donegal Youth League title in July.

On Wednesday night, Barrett lifted the Colin Breslin Cup having made the step up to the first team ranks. His senior debut arrived in an FAI Senior Cup win over Pike Rovers and Barrett also featured against Shelbourne at a packed Dry Arch Park.

"It's great for me being a young player, being brought up into the USL team from youth, it's all unreal,” he said.

“I didn’t expect to play against Shelbourne. I came on against Pike Rovers in the first round.”

The 4-0 defeat by Shels drew an end to Bonagee’s Senior Cup involvement, but Barrett is among the youngsters now foraging with Jason Gibson’s side.

Bonagee’s youths, under Gary McCrory’s management, have won a League and Cup double with the John ‘Gorey’ Curran Cup still up for grabs.

A solitary goal by Josh Maxwell sealed the Colin Breslin Cup triumph on Wednesday at the expense of Kilmacrennan Celtic at The Diamond Park.

Barrett, who has returned from Finn Harps, said:  “I’m privileged to be back at Bonagee and captaining this group.

“We were the first team from the club to win the Donegal Youth League so the team is buzzing.”

Bonagee had to withstand a tidal wave from Kilmac’ and goalkeeper Matthew Gibson was the hero of the hour.

Barrett said: “They tried to come at us in the second half. We had to sit back and just let it all happen. We did well to hold on.

“Matthew has been superb for us all serious. All credit goes to him. Without him, we wouldn’t have won that.

“We thought the game was over when they stuck one in the net, but the flag was up. We had a chance then to hang on. Boys were cramping up, but we stuck it out."