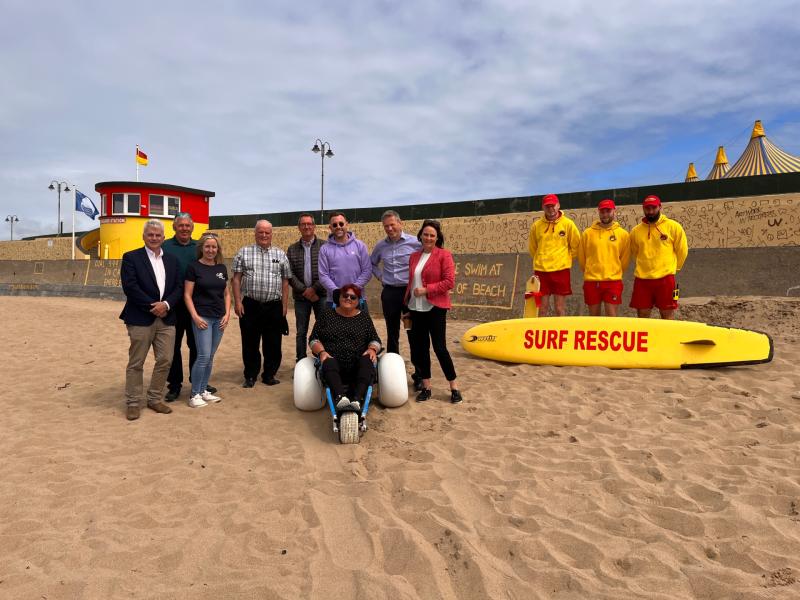 While the new specially adopted beach wheelchair at Bundoran’s main strand have been praised as "fantastic", a number of ancillary challenges have been raised by two local south Donegal councillors.

Cllr Michael McMahon said that in warmly welcoming the arrival of the special wheelchair in June there was a slight problem in terms of getting full access to the beach and that a special mat would be required.

The Hippocampe wheelchair which is adapted to suit soft sandy conditions is available for people with mobility restrictions to take out for a few hours and experience the beach during the summer season.

“But part of the issue is that the front wheel tends to get bogged down and will only go part of the distance as you enter the beach area initially. A special mat will be required, to achieve more comfortable access.

“It is currently kept over at the Salty Shell under the very efficient and capable watch of Geraldine and Michael Patton, who operate the café there,” he told the DonegalLive.ie

“But I think that we will also require a small hoist so that patrons can get out of their own wheelchair more easily.

"It has been doing a fantastic job so far and I recently heard of a local who had been unable to access the beach for the first time in 30 years.

“They had been living in Bundoran and this was the first time that they had been able to access her own beach. That's fantastic. It is a marvellous community initiative with the help of the council.

“These have been welcome to communities along the Donegal coast, but I think that the Bundoran wheelchair would need some form of storage space and change facility, close to the beach, as in Narin and Portnoo.

“I was there on the day of the launch and the big issue is to get from one wheelchair to another. I also think that transfer could be done more discreetly, rather than in the public eye, it would be a great help and maybe it could be rolled out across the county.”