Donegal and Dublin have records to protect on Sunday 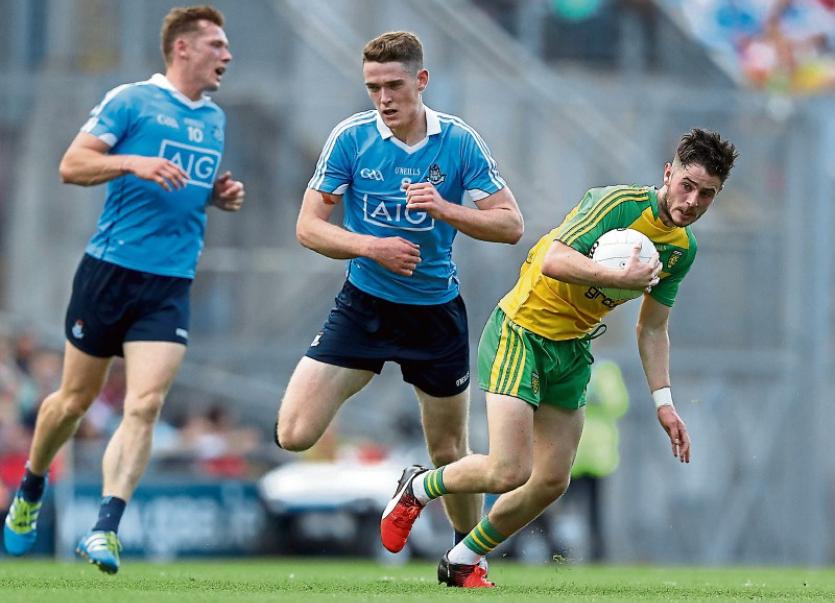 Something has to give when Donegal and All-Ireland champions Dublin collide in a fourth round Allianz National League tie in MacCumhaill Park on Sunday. (2 pm)

Donegal’s unbeaten run in Ballybofey began following their Ulster championship quarter-final extra-time defeat by Down in May, 2010.

Their last league defeat by the banks of the Finn was also against Down and that was in March 2010.

Dublin have won 27 games and drawn four games since the 2013 league defeat to Kerry. They drew twice with Tyrone in the league and Mayo twice in the championship.

“They’re on a brilliant run, but we just have to look at our own display,” said Donegal manager Rory Gallagher earlier this week.

“But we have a very proud record in Ballybofey and we haven't lost in Ballybofey since 2010. We really, really enjoy playing there.

“The crowd's brilliant, there's great surroundings, it's a beautiful pitch.”

Donegal won that game thanks to a late Eoin McHugh point and another barnstorming display from captain Michael Murphy.

There were big performances also from Marty O’Reilly, Ciaran Thompson and McHugh, in the half-forward line who between them contributed 0-9 - three points each - of Donegal’s 0-16 total.

They lost their opening game by three points 2-17 to 1-17 to Kerry in O’Donnell Park.

Ahead of the new season and the start of the league campaign, there was much surmising that Dublin’s push for a three in-a-row in the championship would be greater than their drive for five league titles.

The speculation was that Jim Gavin’s would experiment in the league before going all out in the summer for the championship.

But that presumption was well and truly put to bed when the double champions literally stepped of an aeroplane from a team holiday in Jamaica and headed for Cavan for their first league outing.

The Dublin team that defeated Cavan by seven points, 0-18 to 0-11, also included Cormac Costello and Eoghan O’Gara, both who saw action from the bench against Mayo, and 2015 footballer of the year, Jack McCaffrey, who took a year out in 2016.

And Gavin went stronger against Tyrone in round two with the addition of Johnny Cooper and James McCarthy to bring the number up to ten of those that started against Mayo.

It took a late Dean Rock pointed free to earn Dublin a share of the points in low scoring draw that ended, Tyrone, 1-7, Dublin 0-10.

Tyrone played ultra defensive and space up front was at a premium and thus the reason for a low scoring encounter.

Donegal have shown a notable change of style in their two games to date and have been more attack minded than they have been in recent seasons.

When asked if Donegal would revert back to a more defensive role this Sunday all Rory Gallagher would say was: “Any team that plays Dublin end up defending quite a bit.

“Kerry were quite defensive in the All-Ireland semi-final last year and still conceded 22 points.

“We have to adapt on different days. Our big focus is about new players and playing to our strengths.

“Our strengths are attacking. We are pleased with our scoring return, but we have conceded too much and we rode our luck. It won’t change too much just because it’s Dublin.”

“Conceding two goals a match isn’t an option at the level we’re operating. It is very difficult to claw that back.

“We want to put our best foot forward and the pressure comes from within. We want to deliver and test ourselves against the best teams in the country.

“And this week we're playing, without a shadow of doubt, the best team in the country.”

On a week that he confirmed that All-Star midfielder Neil Gallagher had lost his battle with a back injury and was forced to call time on his career, the Donegal boss also confirmed that he was planning without Patrick McBrearty for Sunday’s showdown.

McBrearty limped out of the Roscommon game in the second half with a groin strain.

“Patrick definitely won’t be available this week. He has a low grade two groin problem,” explained the Donegal boss.

“It’s nothing serious and won’t keep him out long term. He has to be injury free before he can return to running.

“He hasn’t missed many games and it’s a blow. But we knew that day in Roscommon that he was unlikely to be available.”

Darach ‘Jigger’ O’Connor and fit again Stephen McBrearty (Patrick’s brother) are the two players believed to be in the running for the vacant corner forward berth.

However, the manager did not rule out playing Michael Murphy closer to goals.

The manager also gave updates on the fitness of Karl Lacey and Martin McElhinney, who have yet to feature at all this season, as well as Kieran Gillespie and Frank McGlynn.

“Karl is working away. He has a niggly calf injury, but it has cleared and the plan for him will be the latter part of the league.

“Kieran Gillespie is touch and go. He hasn’t the volume of training to start the game.

“Martin McElhinney is back in full training. The back has responded well to the treatment. It may be tight to see if he has enough minutes for this week

“Frank (McGlynn) doesn’t have the same volume of training done. He came back late and he is making progress. He will either start or come on.”

Donegal and Dublin drew when they last met in Ballybofey. That was on the last day of the league in 2013 and Paul Mannion with a late point salvaged a draw for the Dubs on a scoreline of Donegal 1-10, Dublin 0-13. A similar result on Sunday would go down as a good day’s work for Rory Gallagher and Donegal.

It would also see both good records remain intact.