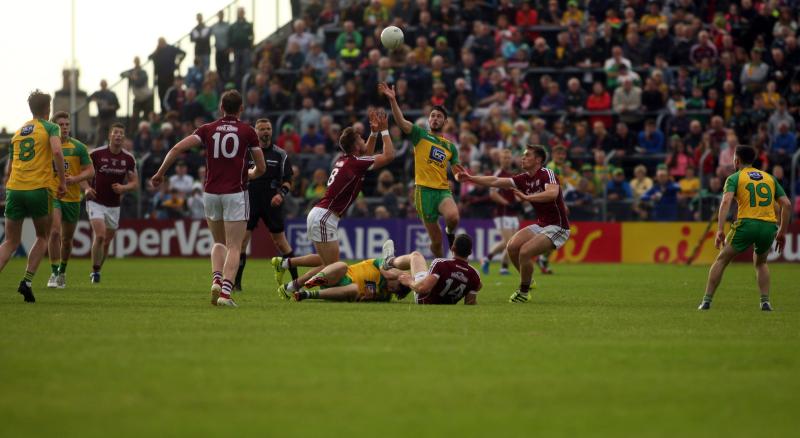 Donegal suffered a second humiliating defeat of the season when they went down to Galway in Markievicz Park, Sligo.

After the recent win over Meath there was hope that Donegal were back in the race, but they were no match for a much hungrier Galway.
Patrick McBrearty tried his best for Donegal but they were so flat that some of their supporters were on their way to the exits after ten minutes of the second half.
The 15 point defeat ranks with some of Donegal's biggest hammerings and will leave plenty of talking points.
Donegal showed two changes from the Meath game with Mark McHugh in for his first championship start of the year instead of Ciaran Thompson while Jamie Brennan replaced Martin O'Reilly.
Galway, as expected, had a new goalkeeper with Bernard Power replacing Ruairi Lavelle.
By half-time the game was just about over as a contest with Galway leading 3-9 to 0-7. Donegal were wiped out in the middle of the field.
The first quarter was evenly contested and indeed Donegal led by 0-5 to 0-4 at that stage, but once Galway hit the front through a Johnny Heaney goal, the floodgates opened.
Donegal had cancelled out the two early Galway points from Sean Armstrong and Shane Walsh through Michael Murphy frees.
Eoin McHugh was getting some change in his runs and despite going 0-4 to 0-2 down, points followed from Patrick McBearty, Murphy and McBrearty again.
But Galway hit the front thanks to a slick move involving Armstrong and Ian Burke with Heaney palming past Mark Anthony McGinley.
Heaney quickly added a point and Damien Comer, much too strong for the Donegal rearguard, won a free for Armstrong to point.
There was a talking point on 25 minutes when a Patrick McBrearty effort was ruled out and Galway came up the field and an effort came back off an upright. Michael Murphy tried to cut it out, but Thomas Flynn got in and he was brought down by McGinley for a penalty. Mark Anthony was black carded and Liam Silke put the ball in the corner of Peter Boyle's net.
Things just weren't going for Donegal as Eoghan Ban Gallagher was fouled but there was no free and Galway came forward for Paul Conroy to point.
Michael Murphy hit over a '45' but Ian Burke had it all his own way to take a point and Damien Comer added another before Paul Conroy and Sean Armstrong set up Johnny Heaney for his second goal just before the break.
DonegaL made a double substitution with Michael Langan and Martin McElhinney coming in and McElhinney had the final score of the half, but Donegal went in eleven points in arrears.
Donegal started the second half with two wides but then Galway hit three points in a minute from Johnny Heaney, Sean Armstrong and Gary O'Donnell.
Martin O'Reilly, just on the field, got a point but then Donegal were down to 14 after Michael Murphy was blackcarded and they had already used their six subs.
Just when they thought it couldn't get worse, Martin McElhinney was also shown black which meant Donegal were down to 13 and just over 12 minutes played in the second half.
Patrick McBrearty was very unlucky to see an effort come back off the crossbar after he fielded a ball in behind the Galway defence.
Michael Langan hit a good score from distance as Galway lost full-back Declan Kyne to two yellow cards in the space of three minutes.
Donegal got the chance to put some respectability on the scoreboard when Martin O'Reilly won a penalty after a good move but Patrick McBrearty's penalty was saved and even his rebound was saved by 'keeper Power.
Martin O'Reilly had a point for Donegal as Galway introduced legend Michael Meehan close to the end of what was a hugely disappointing day for the men from the north west.