Read the Reid: The Camino Walk

The Camino Walk - an endurance test, not a spiritual journey as Donal had expected 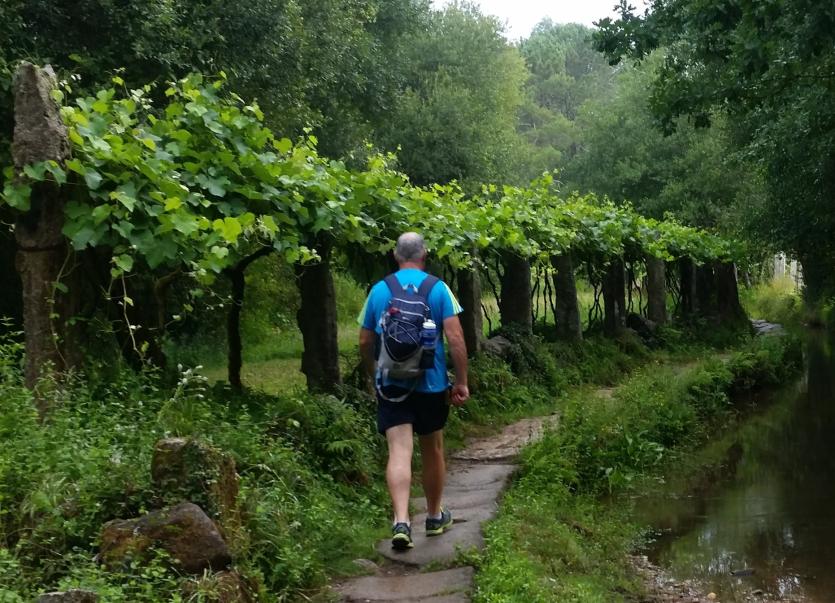 St. James must have had very sore feet. Apparently, he walked from Jerusalem to Santiago in northern Spain in the first century.
I only walked from a place called Barcelos in Portugal to Santiago (186 km) and my feet were killing me.
Modern day pilgrims call this trek the Camino de Santiago (the Way of St. James). There are several routes stretching across Europe and coming together at the tomb of St. James in Santiago de Compostela in north-west Spain.
My wife Maura, my daughter Donna and I signed up for this pilgrimage way back in October. Originally, there were nineteen people but we ended up ten. I was given the responsibility for taking charge of the group since our group leader was unable to travel just days before we were due to depart for Porto. I knew little or nothing about the Camino but after doing some research, I knew that this was going to be a trying adventure. In fairness, our original group leader had much of the spade work done.
After arriving in Barcelos late on a Monday evening, we set off at dawn on Tuesday for Balugães, a small rural quaint little village where there was an apparition of Our Lady in 1702. By car, it was a twenty-five-minute drive but by foot it was almost a four-hour walk.
We reached our destination in the early afternoon. It was hot now and we were glad to have completed the first leg of our journey. There were no complaints. We were in high spirits and even in higher spirits a few hours later. The local wine hit the spot.
We were up the next morning at 6am and bid farewell to Mr. George, the owner and host of this very upmarket hostel. We set out walking with our back packs on board, some were heavier than others. We meandered through the olive groves and vine fields which shimmered delightfully with dew in the early morning sunshine. We could hear cocks crowing in the distance. Walking was easier in the morning because it was still cool.
Ponte de Lima, our next destination is an 18km hike. We made great headway and found ourselves at this, the oldest town in Portugal in mid-afternoon. It is named after the long medieval bridge that passes over the Lima river that runs next to the town.
It was all too like the movie called ‘The Way’ at this stage. This film tells a personal story of a doctor played by Martin Sheen who walks the Camino for his son. It is a beautiful story. Things were about to change for us though. Yes, we reached Ponte de Lima but, our hostel was another 4km up a steep hill on the far side of town. I cursed Martin Sheen.
By the time we got to our hostel, we were drained physically and emotionally. I had never walked this far in my life. The heat was exhausting. Even a cold bottle of beer couldn’t do anything for the thirst or the pain in my legs. I hit the cot early and awoke early next morning.
Surprisingly, I was in top form. Rubiaes, 22km was our next target. Some of the others had to attend to blisters on their feet. Those with the heavier back packs headed off before the rest of us. The grey skies were actually a welcomed site and it wasn’t long before light warm drizzle was blowing into our faces.
As the morning wore on, the drizzle turned into heavy rain but, we had to carry on. By noon, the sun was back. Though, beautiful if one is sight-seeing or lying on a tropical beach, the piercing sun sapped us of energy. Still, we were able to appreciate the comfort of the soft wooded paths in the dense forests where yellow arrows on the trees and on the ground guided us from day one.
Crystal clear streams that reminded me of my youth were alive with small fish. The hills were unending though. One enormous hill that day was twice the height of Cross Mountain in Medjugorje. I was beginning to feel like a cross between Forrest Gump and Edmund Hillary.
Walking walking walking and climbing climbing climbing. Numb with the tedium of just putting one leg in front of the other, I often thought, “What’s the point of this”? This is madness. And this was only my third day.
That evening, we were ferried from our hostel in the wilds by the owner in a pick-up truck to the only restaurant in town. The local hill billies eerily stared at us. The group of 10 sat down and were served with the local delicacy of something that resembled chicken and fish. It turned out that the hostel owner was also the restaurant proprietor. My stomach was holding out so far so I decided to go hungry instead of chancing the wild fowl in front of me.
I didn’t eat breakfast the next morning either but I was buoyed by the expectation of crossing the border into Tui, Spain. We walked 28km that day.

To be honest, as the days wore on, I was beginning to feel easier. I was getting into my stride. There are many cafes dotted along the Camino and we took advantage of them every 5 or 6k. We consumed gallons of water.
In Tui, I spent my first night in a bunk bed since I was a child. The hostels have all the modern amenities such as wi-fi, clean showers and self-catering kitchens. The town of Tui was followed by Redondela, a 33km stroll. The hills and long stretches of winding paths became even steeper and longer.
After the initial difficult first few days, we were by now well used to the hard slog in the sun. We were beginning to enjoy the panoramic countryside and the other pilgrims of varying nationalities who always greeted each other with “Bom Camino” (Portugal) or” Buen Camino” (Spain).
I found the Portuguese people much friendlier than the Spanish. The basic country living differed little though. We often saw old women in the fields with their sickles or wheel barrows doing their normal day’s work. How privileged we are. I bet that they are happier than most of the pilgrims though. They are uncomplicated people with simple lives.
After Redondela, we traversed the Spanish countryside weaving through more forests, climbed and descended more hills passing through Pontevedra, Caldas des Reis and Padron. This amounted to another 65km.
Padron (meaning ‘big stone’) is famous along the Camino because it was here that the Apostle Saint James first preached in Hispania after leaving Jerusalem. He was beheaded soon after he returned to Jerusalem and two of his disciples brought his head and his body in a stone boat back to Padron. They buried him in Santiago de Compostela, a further 21km north of Padron.
We walked this last 21k in hot sunshine. The end was in sight. This definitely was nothing like the movie ‘The Way’. We were knackered, tired, thirsty and hungry.
Santiago de Compostela is the capital of northwest Spain’s Galicia region. And it wouldn’t be a Camino town if there wasn’t a hill. In fact, it is a beautiful city with many hills.
But like the movie, we stayed in a hotel that night. We thought that we deserved it. For me, although Santiago is a gloriously gorgeous place, it has been commercialised by a vast array of touristy bling. Street entertainers and performers of all sorts have infested Santiago. The day we arrived, a band was rehearsing on a huge stage at one side of the Cathedral. Two bars were selling alcohol to the many pilgrims and tourists who packed the Cathedral surrounds. The noise inside the beautifully adorned Santiago de Compostela Cathedral was deafening. St. James’s burial site has been turned into a circus. It was the only disappointing aspect of the whole adventure for me.
The Camino was an endurance test, not a spiritual journey as I had expected. Many of the quaint churches and monasteries were closed. I enjoyed it immensely though. It is not Fatima, the Holy Land or Medjugorje.
Most so-called pilgrims aren’t there for religion though. They do it for the sense of achievement, the scenery, the people that they meet and interact with along the way and time out from reality. It was a family experience for me, time with Maura in a different and sometimes tough environment and time with my daughter Donna who surprised me with her resilience and humour.
Many young people are often too pampered by us their parents. We were blessed to have been able to do the Camino. There were many youngsters on this same journey and I admire them.
I also admire those who were much older than me. If anyone tells you that this is a doddle, they are lying. Hopefully, I’ll do it again, God willing.
Keep the faith!