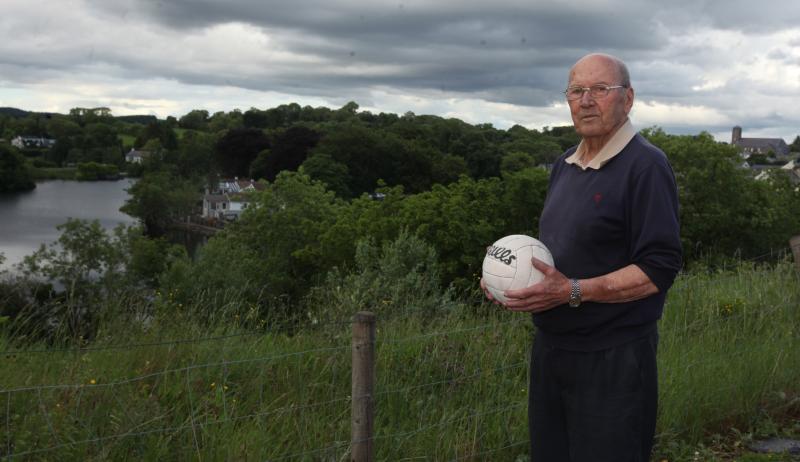 The late Jimmy Mulrone pictured outside his home on the Battery overelooking Belleek Picture: Thomas Gallagher

Jimmy Mulrone, a native of the Battery, Cloghore, Ballyshannon, was 90 and passed away in Sligo surrounded by his loving family in Sligo University Hospital.
Jimmy played minor and junior football for Donegal in the later 1940s and early 1950s in the backline along with the legendary Coyles of Gaoth Dobhair and his neighbour Eddie John Gonigle RIP.
He also played in goals for the famous Corlea cross-border team in the Democrat Cup SFL final in 1946 where they were defeated by Gaoth Dobhair.
But his greatest success came in his 60s when he won five Fermanagh championships and six county league medals in a golden period from 1960-1967 with Devenish, the club of his late wife, Kathleen Kerrigan.
Jimmy was Joint President of Devensh when he died after a lifetime of great service to his club.
From the late 1970s to the Noughties Jimmy was a key figure in coaching the youth of the area.
They won many county titles but more importantly they won with grace and dignity, a mirror image of their coach who had a deep self-respect and a great respect for others.
Jimmy was a man of immense physical strength but had an even greater moral strength.
Near enough was never good enough in his world where there were no short cuts and there was only one way to do things, the right way.
He was also a man of great kindness and often visited old friends like the late Willie McLaughlin RIP, and Peter Gallagher to cheer them up.
He was rightly proud of his family who have all made their marks in various parts of the GAA.
Tommy, Patsy, Sylvester, Peter, Gerry, Paul have all played for Fermanagh at various levels and daughter Mary, who is married to John McGonigle from Corlea, is a keen Devenish fan.
Jimmy’s son, Sylvester, was trainer of the Fermanagh senior team that reached the All-Ireland semi-final in 2004, while grandson Barry is a key member of the current squad.
And even though Devenish was his great love, Jimmy had a great affinity with his first club in Corlea.
And he spent his final days there, where he was very well cared for by his daughter, Mary and the McGonigle clan.
Jimmy was also a man of deep faith, courage and conviction.
May he rest in peace.