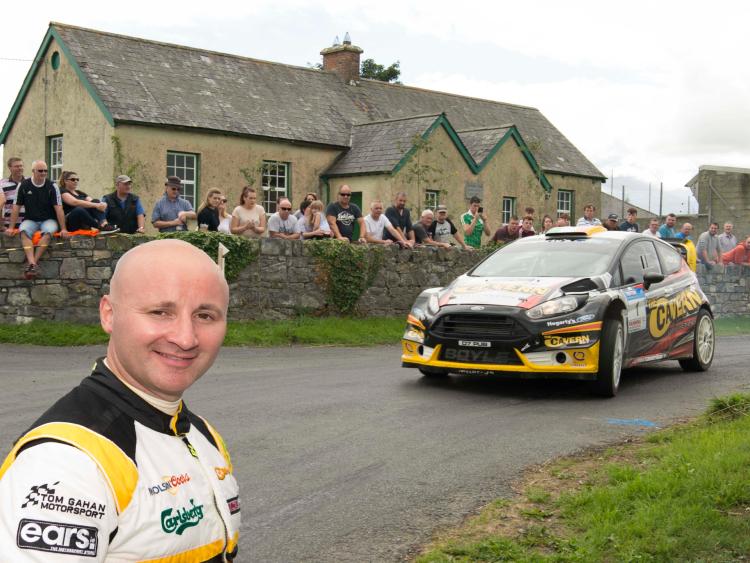 A new season of the Triton Showers National Rally Championship begins on Sunday with the Abbeyleix Manor Hotel Rally that is organised by the Birr and District Motor Club. The event, round one of the eight round Triton series makes a return to Abbeyleix after a two-year term in Nenagh.
Reigning champion Lettermacaward’s Declan Boyle (Ford Fiesta WRC) and four past champions are amongst the entry of some 120 crews. Boyle won last year’s series on a final round decider in his native county where he clinched the series for a record equalling third time, he previously won national titles in 2014 and 2015.
Indeed, he is only the second driver to win the series three times as he joins Monaghan’s Niall Maguire (Subaru WRC), who won the title in 1999, 2002 and 2004.
Just some two weeks ago Boyle debuted a Fiesta R5 at the Galway International Rally but he switches back to his Fiesta WRC for the Triton series. “Yes, it’s back to the WRC, the R5 has less power but is great to handle and better brakes.” Declan’s cousin Brian Boyle returns to the co-driving seat to call the pacenotes.
On the prospect of a record fourth national title Declan remarked, “Yes that’s the one, it would be class to win it four times alright, so we have to put the effort in to see if we can do it.” On his possible rivals he added, “Josh (Moffett) is always a threat and we will just have to wait and see who registers but you have to go flat out the take the slowest of them.”
Meanwhile, Muff driver Joe McGonigle (Mini WRC), who had a very consistent run to finish third overall last season will be aiming to increase his pace.
Last year’s rally winner Clonmel’s Roy White (Ford Fiesta WRC) is set for another national campaign and while he won the title in 2016, he did so courtesy of consistent performance on each of the six events that he took to win the series. Last year’s rally in Nenagh wasn’t a round of the Triton series when White took a 21.1 second win over former champion Donagh Kelly (Ford Focus WRC) with Boyle (Fiesta WRC) a further 19.7 seconds behind in third. At the time, that victory was his first major win while last October he netted his first International Rally win when he triumphed in the Cork “20” International Rally.
No doubt Boyle will set a quick pace as will Monaghan’s Josh Moffett (Fiesta WRC), who just fell short at the final hurdle last year, he has won all the other major honours in Irish rallying and has set his sights on finally achieving victory in the Triton Championship.
Sam Moffett, the 2017 champion will campaign his Ford Fiesta R5 and how he fares against the WRC brigade will be watched with interest as will his battle with the Skoda Fabia R5 of Scotland’s David Bogie, who finished second in last week’s opening round of the British Rally championship in Wales. Meanwhile, Warrrenpoint’s Peadar Hurson (Ford Fiesta WRC), who won the series back in 1992, is still a potent force, only a lack of consistency has seen him drop out of the national challenge in recent years, he will endeavour to begin his Triton bid on a high note.
The top ten also features Niall Maguire, the Monaghan stalwart is an avid supporter of Irish national rallying and while his pace has dropped a little from his halcyon days he is still a force to be reckoned with and he thoroughly enjoys the experience.
Title sponsor Maynooth’s Kevin Barrett (Subaru WRC) only made a few outings in last year’s campaign, he returns for a full season while he will also be keeping a watchful eye on his son Paul, who makes his National debut in a sparkling new Ford Fiesta R5 in the Vado livery. Welsh ace Steve Wood (Subaru WRC) makes a return to the Triton series and he will be hoping to match the pace of the top drivers.
Elsewhere, Pettigo’s Kevin Eves (Toyota Corolla) and Donegal town ace Stuart Darcy (Ford Escort) are amongst the contenders for victory in the two-wheel drive category that also features Wexford’s James Stafford (Darrian), Cavan’s Chris Armstrong (Ford Escort), Kerry’s Mike Quinn (Ford Escort) and Monaghan’s Raymond Conlon (Toyota Corolla).
Inver’s Johnny Jordan (Toyota Starlet) is also amongst the two-wheel drive contingent and in Group N, Lettermacaward’s Michael Boyle and Donegal town ace Trevor Bustard, both in Mitsubishi Evo IX’s provide opposition for former Motorsport Safety Team winner Monaghan’s Niall Maguire in a similar car.
Also competing are Meath’s Eugene Meegan (Citroen DS3R5), Limerick’s Keith Lyons (Ford Fiesta R5) and Cork’s Cal McCarthy who debuts the ex-Aaron MacHale Citroen DS3R5.
In addition to the Triton series, the rally is also the first round of the Top Part West Coast Rally Championship and the Midlands East Rally Championship.
Prior to the event, mechanical scrutiny take place this Saturday evening from 2pm until 7.30pm at Oliver Stanley Motors, Cork Road, Durrow. On Sunday, the first car away from rally headquarters at the Abbeyleix Manor Hotel is at 9.05am with the finish ramp celebrations scheduled for 5.28pm.

Jason Quigley being interviewed after his win over Marin

Impressive third round win for Jason Quigley in California

THE SPORTING DIARY: New faces for Donegal in opener against Mayo