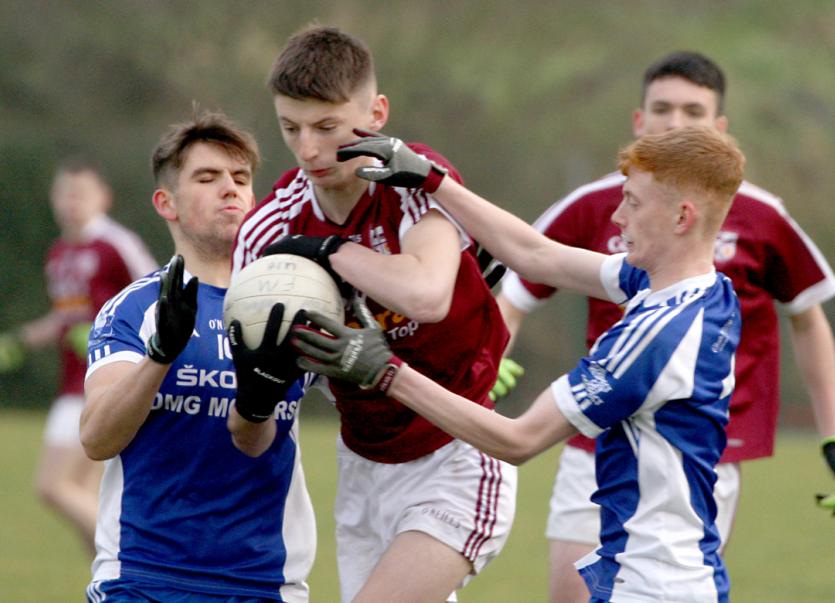 Action from the Four Masters-Termon final

Termon struck with a goal inside 75 seconds, but it was the underdogs Four Masters who lifted the silverware at the end of a well contested Division One decider played in fine conditions.

When Mark Gallagher put the Burn Road side ahead so early on, there were many in the decent sized attendance who were were expecting them to go on and record a handsome victory.

After all, this was a side that had gone on a goals spree against Emyvale the previous weekend as they booked their place in the semi-final  of the Ulster Minor Tournament in Belfast.

But this was to be Four Masters' day - and they were good value for the victory, having a spring in their step and tackling with intent.

Killian Faulkner got their first score on four minute and Eoin Gorrell was then on target to leave them trailing by the minimum.

In between, Carl McCarry suffered a nasty knee injury and after a ten minute stoppage was taken off the field of play on a foldaway table.

Ryan McFadden put over two points from play to put Termon 1-2 to 0-2 ahead six minutes into the ten minutes of injury time at the end of the first half but Termon never really got going and were guilty of some poor finishing, with eight wides in the first half.

The south Donegal side then struck with a goal to tie the scores at the break. Mark Jordan's initial effort was saved by Emmet Maguire - who was much the busier of the 'keepers - but Shay Travers followed up and guided the ball into the path of Faulkner who buried it into the net.

Travers then put Four Masters into the lead for the first time at the start of the second half.

At the other end, Stephen Black surged forward with a goal intentions only to be thwarted by a finely time intervention from Four Masters captain Brian Peter Gallagher.

Indeed, Four Masters were moving in swifter fashion and were hugely unfortunate not to score when hitting the upright and then the post with a fine follow up from Faulkner.

But moments later Faulkner delivered a super point from near the touchline.

And then, in one of the scores of the game - which began with a move deep inside their own half - Joe Leape fired over a cracking effort midway through the second half to make it 1-5 to 1-2.

Termon were in bother and although McFadden landed a free on 59 minutes, the comeback did not really materialise. Jack Alcorn released McFadden with a quick free but he could only find the side-netting.

The north Donegal side's cause was not helped as Caolan Gallagher was red carded following a challenge on Eoin Gorrell.

Four Masters then enjoyed a purple patch that saw Travers, Leape and Alex McCalmont score three points in two minutes as they propelled themselves into a 1-8 to 1-3 lead.

Jamie Grant pulled a point back for the Donegal minor champions but almost straight away Four Masters responded with Travers again on target.

With just three minutes left, Richard O'Rourke smashed the ball into the net to make it 2-9 to 1-4 and it was curtains for Termon.

With tempers fraying, Senan Quinn - who had been booked earlier - got his marching orders for Four Masters and James Grant grabbed a late goal for Termon, but it was too little, too late.

So the side managed by John and Kevin Sinclair end the season on a real high.

And few could quibble with the outcome. This has a team that has come on leaps and bounds and while the Donegal town club's senior side have struggled in recent times, there are surely better times ahead if the youngsters coming through are anything to go by.

Termon were disappointing, but they will surely lift things for their St. Paul's assignment in Belfast on St. Stephen's Day when they take on Kilcoo.