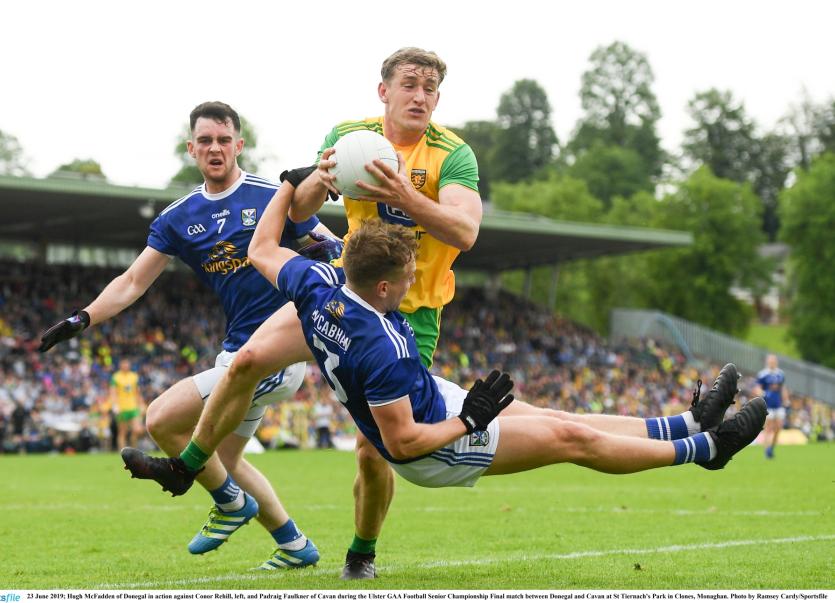 All the statistics point to a Donegal win on Sunday and the bookies have no doubt, pricing Donegal as 1/10 favourites.
Declan Bonner's men will have to shoulder those odds as they take on Cavan for the second time in as many years in an Ulster championship final. But it is not a normal final; St Tiernach's Park, Clones has been sidestepped because it doesn't have floodlights. Presumably the timing of a 4 pm throw-in is to facilitate television coverage.
And the TV coverage is a vital component of the 2020 championship season with Covid-19 ensuring that only the players and backroom teams along with members of the media have access to the biggest day in the Ulster GAA calendar.
Donegal are in their ninth final in 10 years - a statistic which is unrivalled in the modern era. You have to go back to the Down dominance of the 1960s (finalists every year from 1958 to 1971) and then back to Cavan, who monopolised the Ulster championship up until the early 1950s.
Donegal are seeking an 11th Ulster title and sixth in the 10 finals. They are also seeking a first three in-a-row for the county, something that Monaghan denied them in 2013.
During the lifetime of the Ulster championship Cavan have been dominant over Donegal, winning 23 of the 41 meetings; Donegal have won 14 with four drawn.
However, in the last 10 years when Donegal have had their great run, Cavan have been put to the sword on each of the four occasions they have met. And in doing so, Donegal have averaged 22 points were game.
Donegal's victory over Armagh in convincing style on Saturday last in the semi-final in Kingspan Breffni Park only helped to shorten their odds with the bookies.
Complacency was a word mentioned by many people prior to last Saturday's win over Armagh, but there was no need to remind Declan Bonner or Michael Murphy. There have been plenty of warnings from previous games, not least Cavan's victory over Monaghan in the preliminary round in St Tiernach's Park, Clones.
That game showed Cavan's fighting qualities and it also heralded the emergence of two players with the same surname - Thomas and Raymond Galligan. Both hail from the Lacken club and they have been nothing short of heroic in Cavan's journey through the Covid-Championship.
Raymond, who has cemented his links to Donegal by marrying Niamh Martin from Donegal Town late last year, hit a wonder point from almost the middle of the field to defeat Monaghan in extra-time in the preliminary round.
Thomas Galligan was equally prominent in the win over Monaghan as a super sub; he continued in that role against Antrim but started last week against Down in the semi-final. He was quiet in the first half but really came to life when Cavan surged back into the contest in the second half.
It has been an amazing turnaround for Cavan after losing their two league games when returning in October which resulted in them dropping to Division Three. When Donegal and Cavan met last year, Cavan had just been relegated from Division One, while Donegal had won promotion to the top flight.
Last year also Cavan had star players in Conor Moynagh and Dara McVeety, but those two are not available this year to Mickey Graham, while another stalwart Cian Mackey hung up his county boots.
But despite that Cavan have prevailed, thanks to some special individual displays but mostly through a stubborn streak which has seen them at their best when facing adversity.
Donegal will do well to heed the warnings that this Cavan team have shown. Declan Bonner will be without probably his No 1 marking defender in Stephen McMenamin but it will give an opportunity to one of the young guns to again make their mark.
Bonner has built a strong squad and the coaching staff have developed a new style which sees Donegal transfer the ball by foot more often. Once upon a time they needed Michael Murphy at midfield to transfer the ball to the full-forward line. Now they have five or six players who are well able to do this and have been given a licence to do same.
There will be tougher days than Saturday last with the Armagh challenge poor in the second quarter. But still Donegal looked sharp once they got into their stride. The burden, once shouldered by a few, is now shared almost equally.
Even without Stephen McMenamin, there will be an awful lot of competition to just be among the 20 players that will be used next Sunday. Caolan Ward, who was one of Donegal's best performers in the league before lockdown, has yet to feature, which shows the compeitition there is for places.
Will there be many changes for Sunday's Ulster final? Will Patrick McBrearty be in from the start? The answer to those questions is probably being decided on the training field this week.
The manager was quick to stress last week that the most pleasing thing for him about the win over Armagh was the workrate of the whole team. There is no doubt that the modern team has to have all units working hard. Just take a look at the top two teams in the Premiership - Liverpool and Manchester City. Their number one priority when they lose possession is to work tirelessly to get it back.
It is a similar story in Gaelic football. Donegal are progressing nicely in that regard. Just look at the workrate of Jamie Brennan last week in winning a ball back in front of the empty stand at Breffni Park. Those little battles are what matter. Winning the war is easy when you win those small battles.
Sunday's Ulster final in the Athletic Grounds, Armagh will be no different.
Donegal to win the little battles!