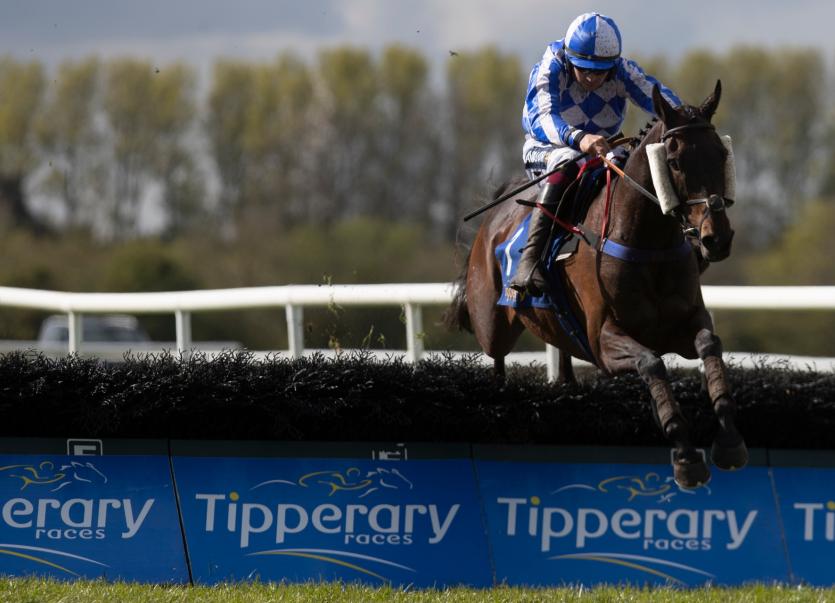 The Lorna Fowler-trained Bronson In Blue and Conor Orr were winners at Tipperary on Thursday. Photo: Patrick McCann/Racing Post

Dylan Browne McMonagle was the big winner at Gowran Park on Wednesday where he won the Listed Irish Stallion Farms EBF Vintage Tipple Stakes on the Joseph O'Brien-trained Mighty Blue.
The versatile five-year-old bounced back to form with a runaway success for her owners, the Capel Street Syndicate. A 6/1 chance, she eased clear of her rivals over a furlong from the finish to record a whopping seven and a half-length victory over the Henry de Bromhead-trained Lismore.
Conor Orr rode a winner at Tipperary for Summerhill, County Meath trainer Lorna Fowler on Thursday as Bronson In Blue took the three-mile handicap hurdle for owner/breeder Michael Conlon. The 5/1 chance came from off the pace to beat the Oliver McKiernan-trained Junior Rattler by four and three-parts of a length.
The following evening, Oisin Orr got in on the winning act as he landed the seven-furlong handicap at Cork on David Marnane -trainedJM Barrie. The 9/1 chance led in the final strides to beat the Pat Fahy-trained Navorrosse by a short-head.

Other Racing News
Jamie Codd brought the curtain down on a terrific point-to-point career with a winner at Tattersalls Farm on Sunday. Codd called it a day after winning the four-year-old maiden on the Denis Murphy-trained Supreme Gift, his 972nd point-to-point winner in a 22-year career.
The 39-year-old said, “I’m retiring from point-to-points, but I’ll continue to ride on the track as long as Denise Foster and Gordon Elliott want me! It’s been a brilliant journey. Point-to-points have given me my career and I’ve met a lot of great people.
This has been on my mind since Christmas and if my local track Lingstown had been on in March, I probably would have done it there. I wanted to go out on a winner for Denis and it worked out great. I work for Tattersalls as well so it was lovely to do it here.” Only Derek O'Connor has ridden more point-to-point winners than the Wexford man.