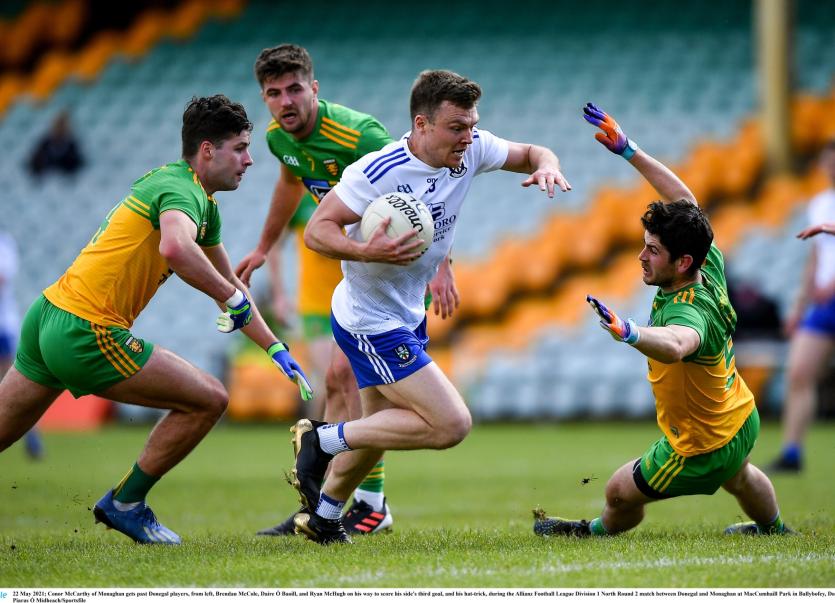 What a difference a week makes. A win in Omagh and Donegal were third favourites behind Dublin and Kerry to win the Allianz National League Division One.
Monaghan came to town on Saturday evening and to paraphrase a famous St Eunan's supporter, upset the apple tart.
How Donegal secured a draw from the game in MacCumhaill Park on Saturday remains a mystery. Leaking four goals and lucky that it wasn't eight, they somehow turned it around in the final quarter.
You could point to the loss of Michael Murphy in the opening minutes being a factor if you were looking to provide an explanation for the performance, but in truth it was just one of those days in sport when Donegal were on the back foot from the start.
If you didn't see the game and heard the result afterwards, you would probably have said Donegal, scoring 21 times to Monaghan's 15, must have been very unlucky not to take the two league points.
It just goes to show that results don't always tell the full story. Donegal were on the rack. Monaghan had a foot on their necks when they went six points up again in the second half, but they missed some gilt edged chances to close out the game.
The positive for Donegal is that they continued to chip away at the lead and they had players who could find the target from distance. Patrick McBrearty, despite missing a few, was fired up for the contest from the start; Oisin Gallen chipped in with three points and he showed once again that he likes playing in MacCumhaill Park.
Niall O'Donnell, Ciaran Thompson and Michael Langan all hit long-range efforts and Langan's goal was another from what is becoming a great selection for the St Michael's man.
What other positives were there? Shaun Patton couldn't be faulted for the goals and his kick-outs were again impressive. He was also more involved in general play, as has become the norm this year for 'keepers.
Peadar Mogan's energy and drive is certainly a big plus and the other positives were the returning players such as Odhrán Mac Niallais and Stephen McMenamin, who both played well. It was good also to see Eoghan Bán Gallagher back, although was it wise to start him in such a high tempo game? Would it not have been better to ease him back in for the last 25 minutes?
The medical backroom team will have been busy this week as Michael Murphy, Eoghan Bán Gallagher, Brendan McCole and Eoin McHugh would have spent most of the week on the treatment table. Word from those in the know say that all four will be okay, with none of them sustaining serious injuries.
However, it is doubtful if any of the quartet will be risked this weekend when Donegal travel to the Athletic Grounds, Armagh. Donegal need a draw to qualify for the league semi-final. However, defeat will, more than likely, leave them staring at a relegation battle, most likely with Roscommon (who look odds on to finish bottom of Division One South).
But apart from the result this weekend, Donegal management will be hoping to build a better defensive strategy. Leaking four goals in the championship would be calamitous.
Young Conor O'Donnell of Carndonagh was on the line ready to be introduced on Saturday but there was a change of heart. It would be nice to see him tested this week. Hopefully, also, Odhrán McFadden Ferry is able to return.
There is nothing wrong with a bit of experimentation. Finishing third would not be the end of the world. Getting it right for the trip to Newry to face Down on Sunday, June 27 is the main focus.
We have to shore up the centre and that might need playing an extra man in this area. Hugh McFadden did this job in the past and still looks the most likely candidate. He didn't look himself last weekend, but that may have been a hangover from his head injury in Omagh. Maybe he shouldn't have been playing at all last Saturday.
One issue that we also have to tackle is pace at midfield. If Jamie Brennan is fit to return, could Michael Langan or Ciaran Thompson start in the centre alongside Odhrán Mac Niallais?
We won't have Michael Murphy this week so it will be good for others to step up and become leaders. The management have a week to prepare for life without the Glenswilly man.
Whatever about the result, the game presents the chance - even if forced on them - for management to try out new combinations.