Club by club guide to the Donegal Senior Football Championship 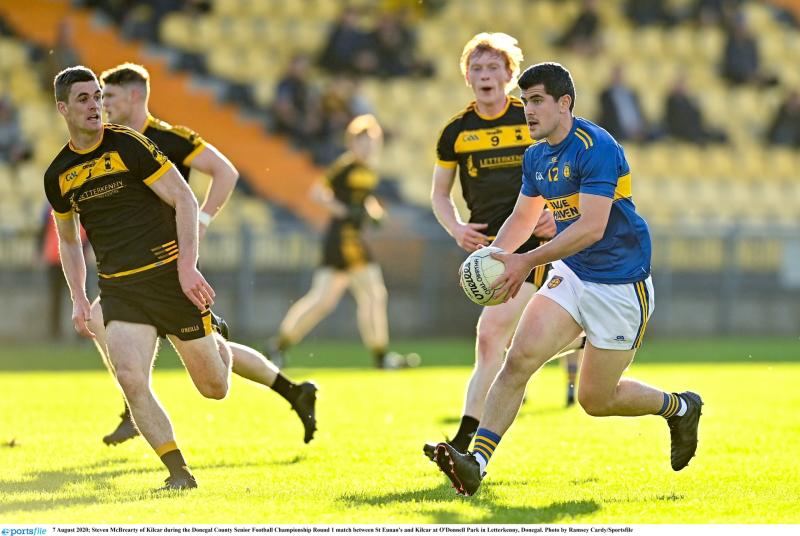 Peter Campbell, Tom Comack and Gerry McLaughlin profile the 16 clubs who will go in search of the Dr Maguire

Glenswilly
Manager: Padraig Bonner
Last year: Won just one game in the group and did not make the last eight
This year: Finished at the bottom of Division 1
SFC opponents: Killybegs (a), Sean MacCumhaills (h)
Prospects: Glenswilly are very much in transition. Michael Murphy returned in recent weeks and rounded off what has been a poor league season with a good win over Gaoth Dobhair. This win could be the kick this young team need and with Killybegs away and MacCumhaills at home a quarter-final place is not beyond them.
Star man: Michael Murphy

Gaoth Dobhair
Manager: Kevin Cassidy and Joe Duffy (joint)
Last year: Beaten semi-finalists
This year: Finished in fifth place in Division 1
SFC opponents: Milford (h), St Michaels (a)
Prospects: While there is a doubt over the availability of Neil McGee, with the return of Odhrán Mac Niallais and Dáire Ó Baoill from Donegal duties the men from the Gaeltacht still have a formative look about them. They have to be contenders.
Star man: Odhrán MacNiallais

Bundoran
Manager: Cathal Corey
Last year: Lost out heavily to St Eunan's in quarter-finals
This year: Struggled in league but saved by no relegation
SFC opponents: Ardara (a), Killybegs (h)
Prospects: Have done well in championship in recent years but loss of Jamie Brennan, who has had ankle surgery, will probably mean that they will be less competitive. Could well end up in a battle to save their senior championship status but also capable of taking a big scalp.
Star man: Paul Brennan

St Naul’s
Managers: Brendan McCready/Andrew Gallagher
Last year: Won two games to stay senior
This year: Finished just below promotion play-off
SFC opponents: Termon (h), Glenfin (a)
Prospects: Did well to maintain their place in senior ranks in first year with win on final day away to Termon. Have performed really well in the league, mostly without county men Peadar Mogan and Brendan McCole. Introduced a number of young members to panel and will be targeting a couple of wins, with first two games among them.
Star man: Stephen Griffin

Killybegs
Manager: John Cunningham
Last year: Defeated Dungloe in final game to secure status
This year: Have struggled at bottom of Division 1
SFC opponents: Glenswilly (h), Bundoran (a)
Prospects: Having Hugh McFadden and Eoghan Bán Gallagher back will make them competitive. They met Glenswilly in first game of league and won comfortably. Will target a win in first game although Glenswilly will be stronger with Michael Murphy back. Keeping senior status will be the target.
Star man: Hugh McFadden

Naomh Conaill
Manager: Martin Regan
Last year: County final winners (being appealed)
This year: Democrat Cup Division One winners
SFC opponents: Glenfin (h), Aodh Ruadh (a)
Prospects: Among the top teams in contention once more. Have a really strong panel, which was seen during league when they went through undefeated, posting big scores. Now with county men back, they will almost certainly be in the shake-up and few would bet against them being there again on county final day.
Star man: Ciaran Thompson

Termon
Manager: Francie Friel
Last year: Won through in relegation play-offs
This year: In play-off for promotion from Division 2
SFC opponents: St Naul's (a); St Eunan's (h)
Prospects: The draw has not been kind to Termon, who have introduced a number of good young footballers last year and this year. Will be putting a lot of effort into first game against St Naul's; would not be expected to match St Eunan's, and will have fingers crossed for better draws in last two rounds.
Star man: Ryan McFadden

Milford
Manager: Shaun Paul Barrett
Last year: Retained senior status
This year: Just lost out on promotion play-off place
SFC opponents: Gaoth Dobhair (a), Ardara (h)
Prospects: Looks like it will be another tough campaign for Milford. They will be huge underdogs away to Gaoth Dobhair but will target a win at home to Ardara. But with the bottom eight to contest relegation play-offs, it would be a huge result if they can avoid that.
Star man: Cathal McGettigan

St Michael’s
Manager: Daniel McLaughlin
Last year: Lost out in quarter-finals
This year: Mid-table in Division 1
SFC opponents: MacCumhaill's (a); Gaoth Dobhair (h)
Prospects: One of the teams that are just below the top four or five. Always competitive but one feels they will struggle to make inroads. Have a game changer in Michael Langan but it is hard to see them coping with the bigger teams. Last eight would be regarded as success for Daniel McLaughlin, who took over midway through season.
Star man: Michael Langan

Aodh Ruadh
Manager: Barry Ward
Last year: Beat Cloughaneely by 2-14 to 1-12 Donegal IFC final
This year: Division Two winners.
SFC opponents: Four Masters (a); Naomh Conaill (h)
Prospects: Back in SFC for first time since 2010 and have a tough draw against Naomh Conaill in the second round of the SFC and an interesting derby tie before that with Four Masters. Credentials will be tested but recent form could see them vie for place in last eight.
Star man: Colm Kelly

Kilcar
Manager: John McNulty
Last Year: Lost SFC final to Naomh Conaill on penalties but the outcome is still in dispute
This Year: Without county players in the League but finished creditably.
SFC opponents: St Eunan’s (a); Four Masters (h)
Prospects: Always a contender although the off-field matters are a distraction. Have a tough opener away against St Eunan’s and then an easier assignment against Four Masters. Will definitely be in the last four and could have won the 2020 county title had they taken their chances in extra time.
Star Man: Patrick McBrearty

Ardara
Manager: Damien Devenney
Last year: Won a relegation play-off with Dungloe to stay in SFC competition.
This year: Not a great year as the club finished fourth from the bottom of the League in an up and down season.
SFC opponents: Bundoran (h); Milford (a)
Prospects: Their ambition would be to make it to the quarter-finals, something they have not done for quite some time. On the plus side, the return to form of the iron man Paddy McGrath has given them a real fillip and encouraged their gifted younger players.
Star man: Paddy McGrath

MacCumhaill’s
Manager: Paul Rouse
Last Year: Lost out narrowly to Gaoth Dobhair in quarter-final
This Year: Finished mid-table in Division 2
SFC Opponents: St Michael’s (h) Glenswilly (a)
Prospects: At full strength and with Oisin Gallen flying they would be a good bet for the quarter-finals. Will be hoping to get something from opening game and will also be hoping for good draws in rounds three and four.
Star man: Marty O’Reilly.

Glenfin
Manager: Mark McGinty
Last Year: Lost to Naomh Conaill in quarter-finals
This Year: In play-off with Termon to return to Div 1.
SFC Opponents: Naomh Conaill (a), St Naul’s (h)
Prospects: They are already one step away from Division One and would hope to get out of the group stage of the SFC to retain their senior status. Tough opener but would hope to repeat last year's win over St Naul's and then hope for good draws in rounds three and four.
Star man: Gerard Ward