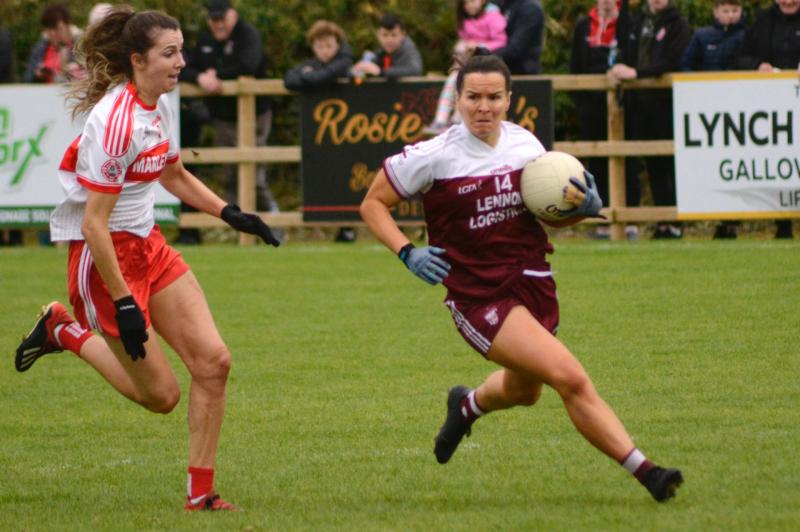 Termon manager Andy Connors and his star player Geraldine McLaughlin have queried the time-keeping that they feel cost their side victory in the Donegal LGFA SFC final on Sunday.

In a titanic struggle, Glenfin emerged victorious in extra-time on a 1-23 to 2-18 scoreline in Lifford, although Termon officials were unhappy with the amount of injury-time played.

With McLaughlin standing over a free-kick five minutes into injury time, both the player and her manager Connors say they were told there was one minute to play by match referee Declan Callaghan.

McLaughlin scored to edge Termon into a narrow 2-14 to 1-16 lead and play continued for almost three minutes before Glenfin were awarded two frees, one of which was brought forward, and Yvonne Bonner equalised to bring the contest to extra-time.  Glenfin came through to win by three points and retain the trophy they won last year.

“After such a brilliant game of football between two evenly-matched teams, we should be talking about Geraldine scoring 1-16, Yvonne Bonner’s 1-9 or the 11 points Karen Gurthie scored,” Connors said. “But we’re not and this is not sour grapes because of our defeat and well done to Glenfin.

McLaughlin put on a fantastic personal showing and was unfortunate to lose. She too was unsure as to why there was so much injury-time.

“It was very disappointing knowing that we were so close,” she said. “No-one gave us much of a chance and we were definitely the underdogs. I don’t know where he pulled the time out of. I don’t know if he realised that there was going to be extra time in the game.

“The game was basically finished at that stage.  No-one knows where the time came from because there were no big stoppages in the game. Anyone who was at the game said the same.”