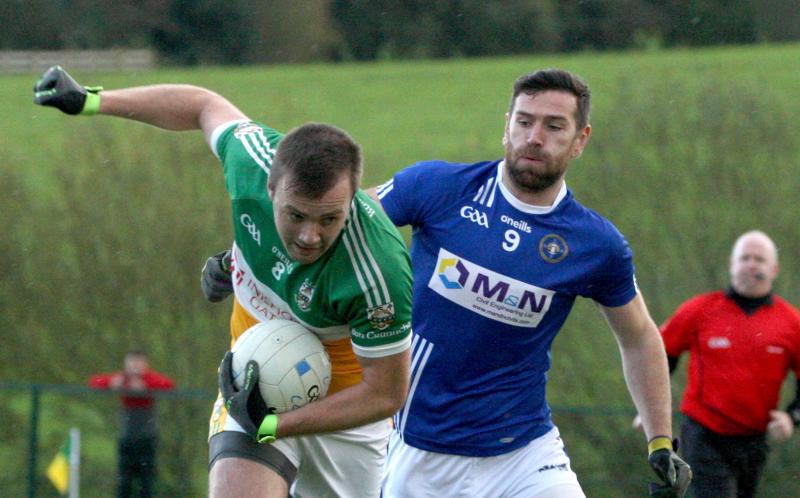 An established team now in Division 1 of the League, Cloughaneely want to make the jump into the ranks of the senior championship.

The same hopes have crashed in recent seasons, but the Falcarragh flag bearers are back in the IFC final after Sunday’s six-point win, 2-11 to 0-11, over Buncrana.

“We have been saying it every year that we want to be a senior club,” Cloughaneely midfielder Darren McGeever said.

“Every year, we aspire to win this intermediate and we’re back in the final now.

“Denis Boyle said to me after we won the intermediate the last time that it’s something in between senior and intermediate that we need! Hopefully now we can win it and get up to senior. We have a good panel to build on.”

Leading by five, 1-7 to 0-5, at half-time, Cloughaneely had to withstand a Buncrana fightback early in the second half.

When Aidan Doohan bagged their second goal, eleven minutes into the second half, it was curtains.

McGeever said: “Goals win games and that was how it was today. The early goal settled us a wee bit. Buncrana came back at us again, but we got the goals at the right time. “We’re delighted to be in the final.

“We knew that they would get a purple patch and they did. We just had to weather it. We got up the pitch and Aidan had a very good finish.

“We’re down a few boys. Any other year, the wheels might fall off, but we have a good panel and Michael Lynch has about 25 good men. A lot of boys have come in and stepped up.”

Cloughaneely, who were beaten by Aodh Ruadh in last year’s final, now face Dungloe with a senior return up for grabs for the winner.

McGeever said: “It’s massive for us to be back in the final. We have a massive challenge so we’ll have to knuckle down and get back on the pitch again to work. We saw how good Dungloe are on Saturday. To blow Glen out of the water shows the quality they have. We know that we have a lot of work in front of us.”