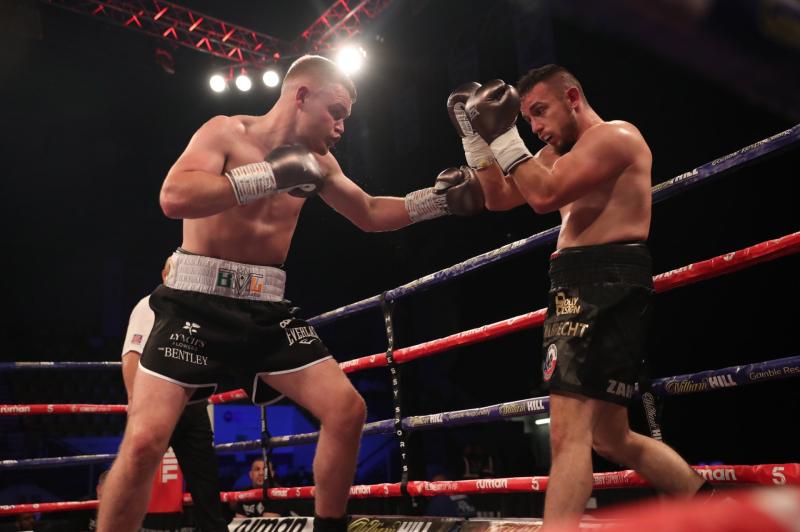 The St Johnston man overcame Pavel Albrecht at the Skydome Arena in Coventry.

McGinty maintained his unblemished professional sequence and is now 4-0 in the paid ranks with his next bout slated for December on another Hennessy Sports card.

McGinty, now based in Manchester where he is trained by former world champion Ricky Hatton, indicated in the build-up that he wanted to replicate the Hitman’s entertaining style.

Albrecht began to appear unsteady on his feet when McGinty landed a couple of fire-cracking body shots at the end of the opening stanza.

McGinty’s September stoppage of Nikolov, in the third round, was his first inside-the-distance win as a professional.

McGinty stayed in control of things in the second round and by the end of the third, Albrecht tried to call a low-blow, in a seeming attempt to buy him a second to catch a breath.

As is his wont, McGinty had plenty of joy to the Czech’s body.

The 30-year-old Albrecht arrived in Coventry with a 9-13, 7KOs card. This was his ninth fight of a busy 2021 with three wins and five defeats ahead of his meeting with the Donegal man

McGinty - managed by the Los Angeles-based Sheer Sports - was back at a venue he has become very familiar with having beaten Dwain Grant and Teodor Nikolov at the Skydome earlier this year.

An eight-time Irish champion as an amateur with Oakleaf ABC, McGinty might have gone for the KO in the closing chapter with Albrecht out of steam.

The former Commonwealth Youth Games silver medals took the air from Albrecht, who managed to see the final bell.

McGinty turned pro in 2019, but had a frustrating wait for his debut, due to the Covid-19 pandemic, but he overcame the experienced Jan Ardon on points after a six-rounder last December in Redditch.