A day out from Jason Quigley's shot at Demetrius Andrade’s WBO world middleweight title in Manchester, New Hampshire, Chris McNulty, who is part of Team Quigley and in the United States, pens the Ballybofey boxer's journey 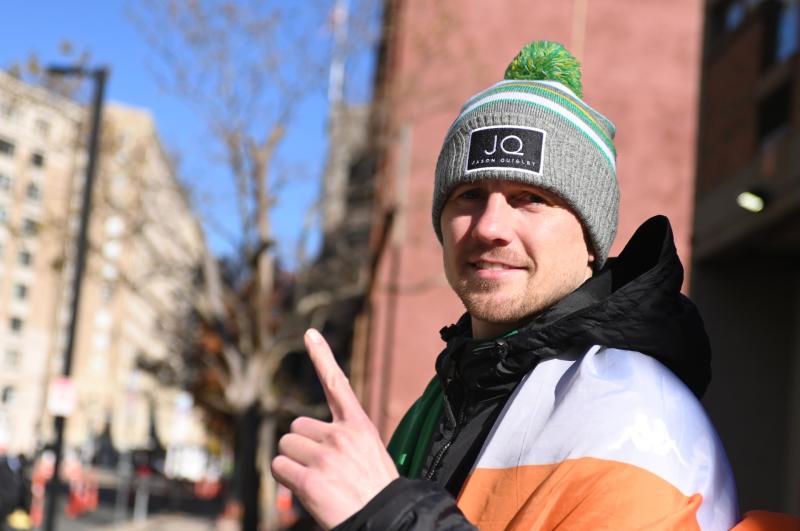 Jason Quigley was in Boston this week before his tilt at Demetrius Andrade’s WBO world middleweight title in Manchester, New Hampshire, on Friday night

The Bridge Cafe on Elm Street, Manchester, is where Jason Quigley has been shooting the breeze this week. The winter chill breezes up from the Merrimack River, which once powered this old mill town. The air demands layers, giving Quigley some added anonymity if it weren’t for the lettering bearing his initials on his clothing.

Behind the imposing brown-stoned buildings, the quaint Bridge Cafe on Elm Street, the main thoroughfare, could as well be in Ballybofey.

Quigley is readying himself for the biggest night of his career with a shot at Demetrius Andrade’s WBO world middleweight title looming on Friday night. Not that you’d know it as Quigley crunches through the fallen leaves.

“I’m relaxed and chilled out,” he says. Quigley is the underdog ahead of his meeting with the unbeaten Andrade, who has an unblemished 30-fight record card. 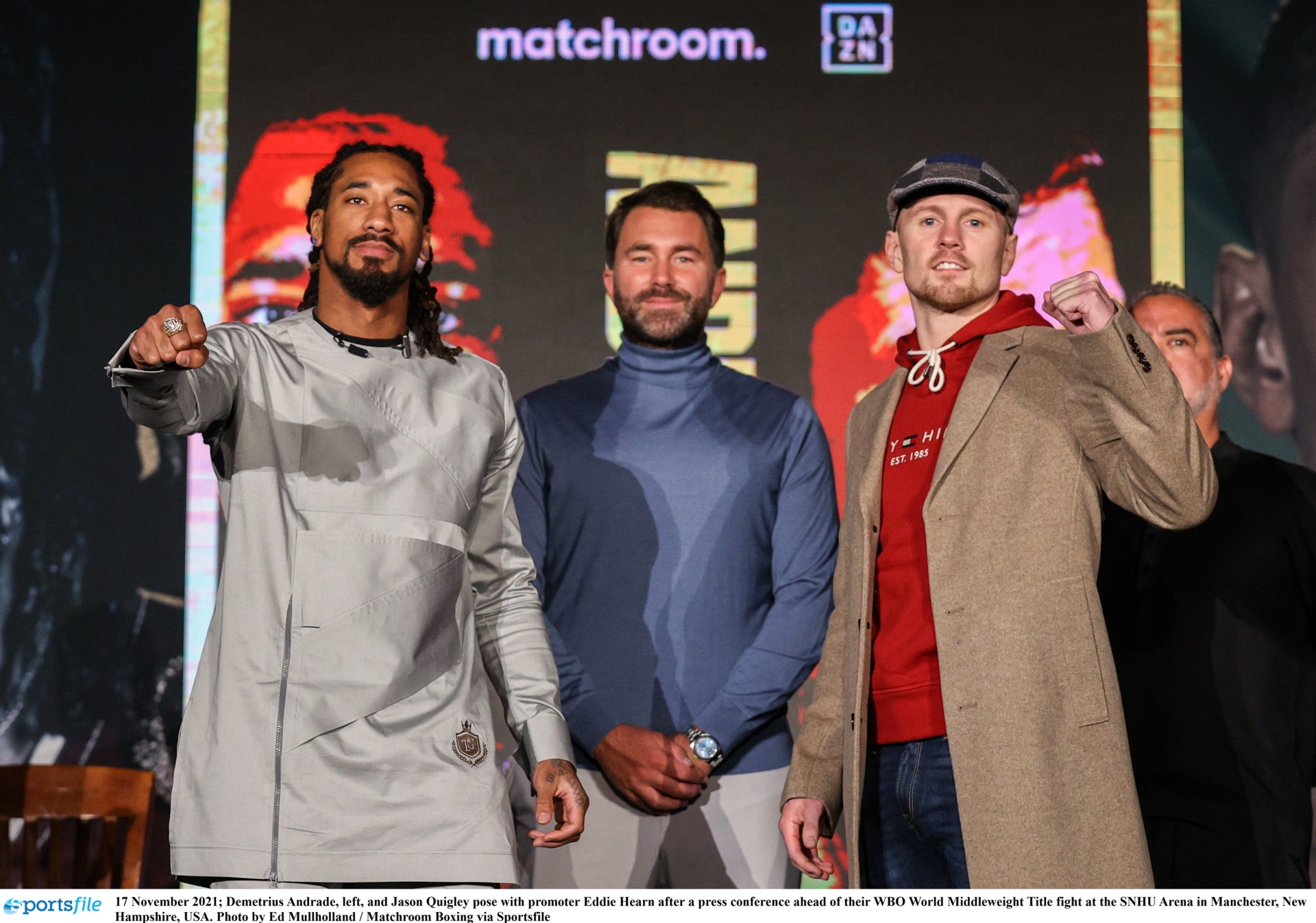 The Rhode Island southpaw is an awkward opponent, who brings danger rather than delight; a trait that means he’s not one of the box-office punchers in the middleweight division. 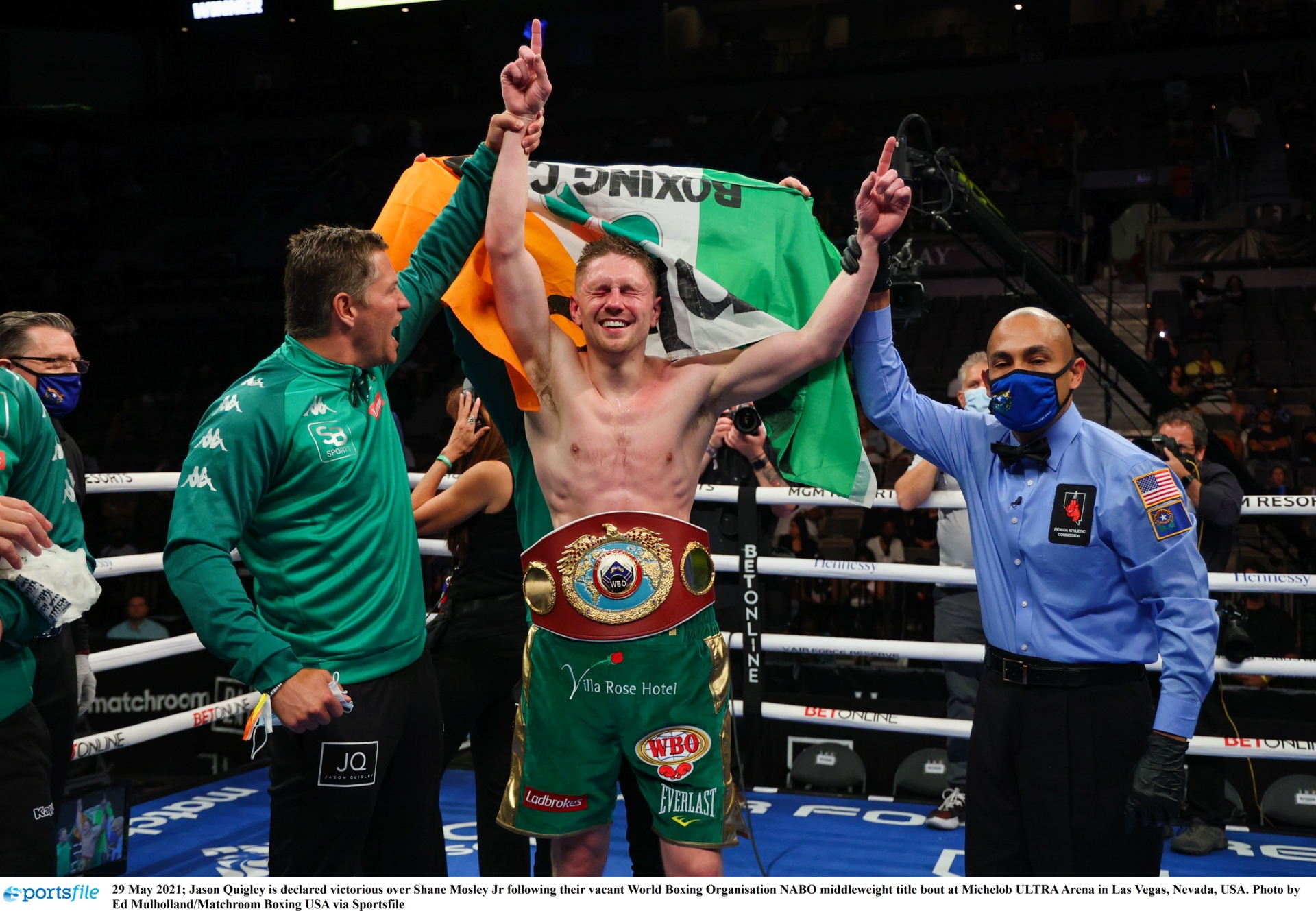 The young Quigley watched in awe of Marco Antonio Barrera’s capture of the WBO belt at super-bantamweight.
He dreamed of his own date with destiny as he punched the bags in the hall of the Finn Valley Centre, where the Finn Valley ABC was based. Now, his big moment has arrived.

There is no giddiness now. Quigley has left no stone unturned and based himself at Morecambe, England at the home of world heavyweight champion Tyson Fury for three weeks prior to his departure for America.

Quigley says: “It’s an amazing opportunity for me and something I’ve trained for since I was a kid. Now that it’s here, I have to enjoy the moment, but also stay focused and concentrated. Some people put it on a pedestal and think it’s only certain guys who can become world champions. When you’re walking, breathing and doing everything in the same environment as current world champions, you see that they’re just the same as you.

“You are your environment. You put yourself around people who can better you, improve you and drive you on to get what you want to achieve in your life. You dream of those things as a kid and you visualise it.

“It’s here now and it’s right on the doorstep. It’s not that I’m like ‘wow, I can’t believe I’m here’. I’m here now. This is where I have worked my ass off to get to. I deserve to be here. I’ll get in there and prove that I belong at this level.

“I’m at a great place mentally, physically, and in every way. I’ll get in there and put in the performance of my career.”
It was when Quigley won European Youth gold in 2009 in Szczecin that the realisation dawned: He could mix it with the best in the world. 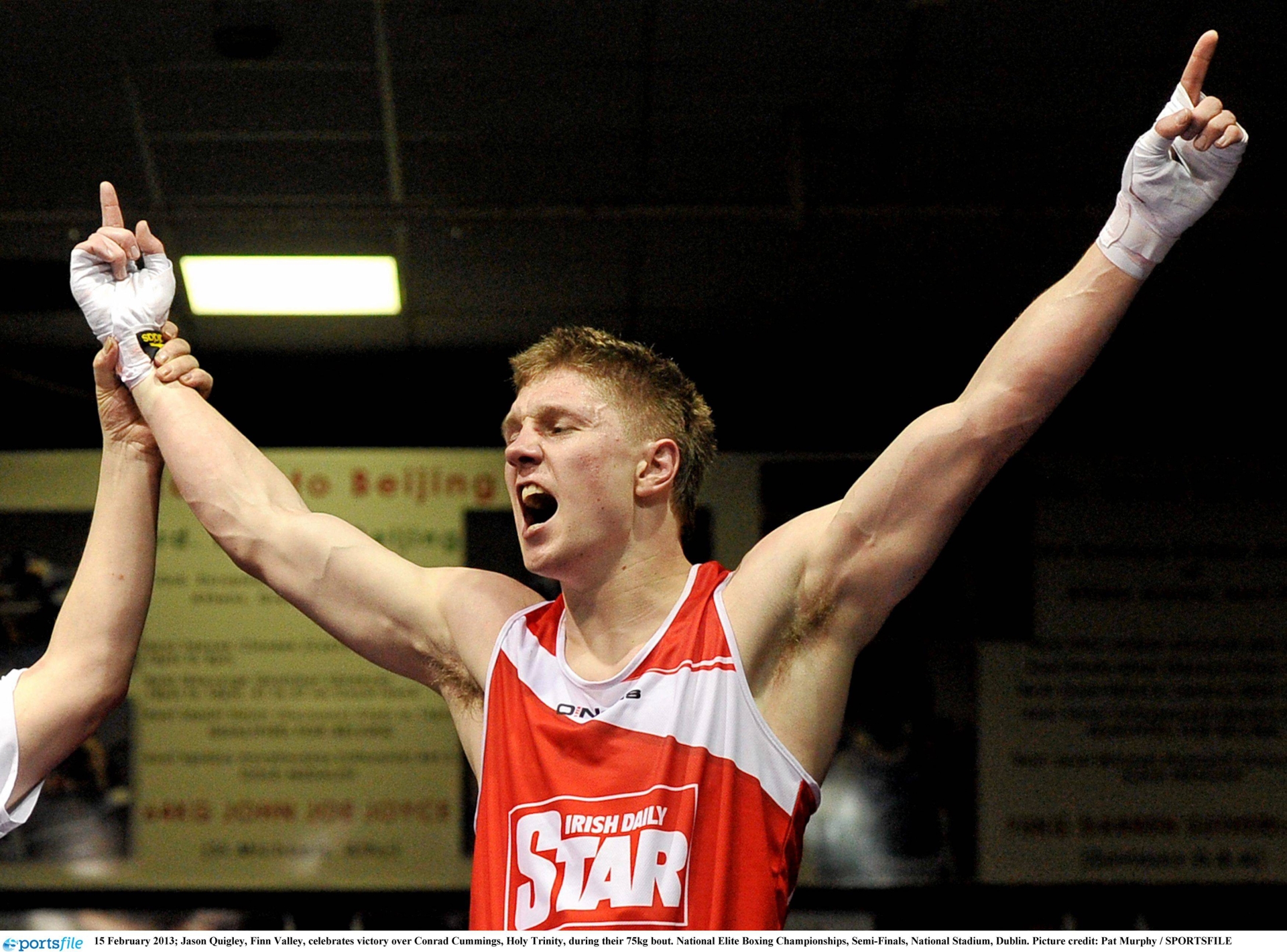 Boxing would be his life. In wins over Joni Polishsuk (Finland), Paraschiveanu Catalin (Romania), Muratcan Bugra Oner (Turkey), Dgaba Hositashili (Georgia) and Emil Ahmadov (Azerbaijan) Quigley dropped only four points.
Quigley was about to leave full-time education from St Columba’s College when he was 17. With the help of the school Principal, Maeve Scully, he was allowed to attend school one day a week, had the rest of his work emailed. He was still appointed as the head boy.

‘I’ll call in with the belt someday’ he vowed. He won an Irish Under-21 title when he was just 17. For ‘experience’, he was entered in the Intermediates, but he won those too - beating Patrick J Ward in the final. In the lead-up to those Intermediate Championships, Quigley spent time at Joe Calzaghe's base in Caerphilly, South Wales. Nathan Cleverly, then the WBO light heavyweight champion, was Calzaghe’s training partner.

Vince Cleverly mischievously wondered if Quigley could dance for 10 rounds with his kingpin. Quigley went in and a penny dropped for those at ringside.

After losing to McLaughlin, Quigley was at a crossroads, but deep in the bowels of the National Stadium he summoned the right response.

“What’s our next move,” he said through gritted teeth. There and then, the road back was much clearer. In 2013, Quigley avenged the ghosts of Championships past when he defeated O’Neill on a countback in an Elite quarter-final. His defeat of Roy Sheahan in the final gave Quigley the elusive Elite crown - and a passage towards his destiny. A rank outsider with the bookmakers before the European Championships, he won gold.

Few at that level knew of his talents before Minsk. He was the talk of the sport by the time he boarded the flight to Dublin, his latest gold nugget around his neck after seeing off Bogdan Juratoni of Romania in the final. 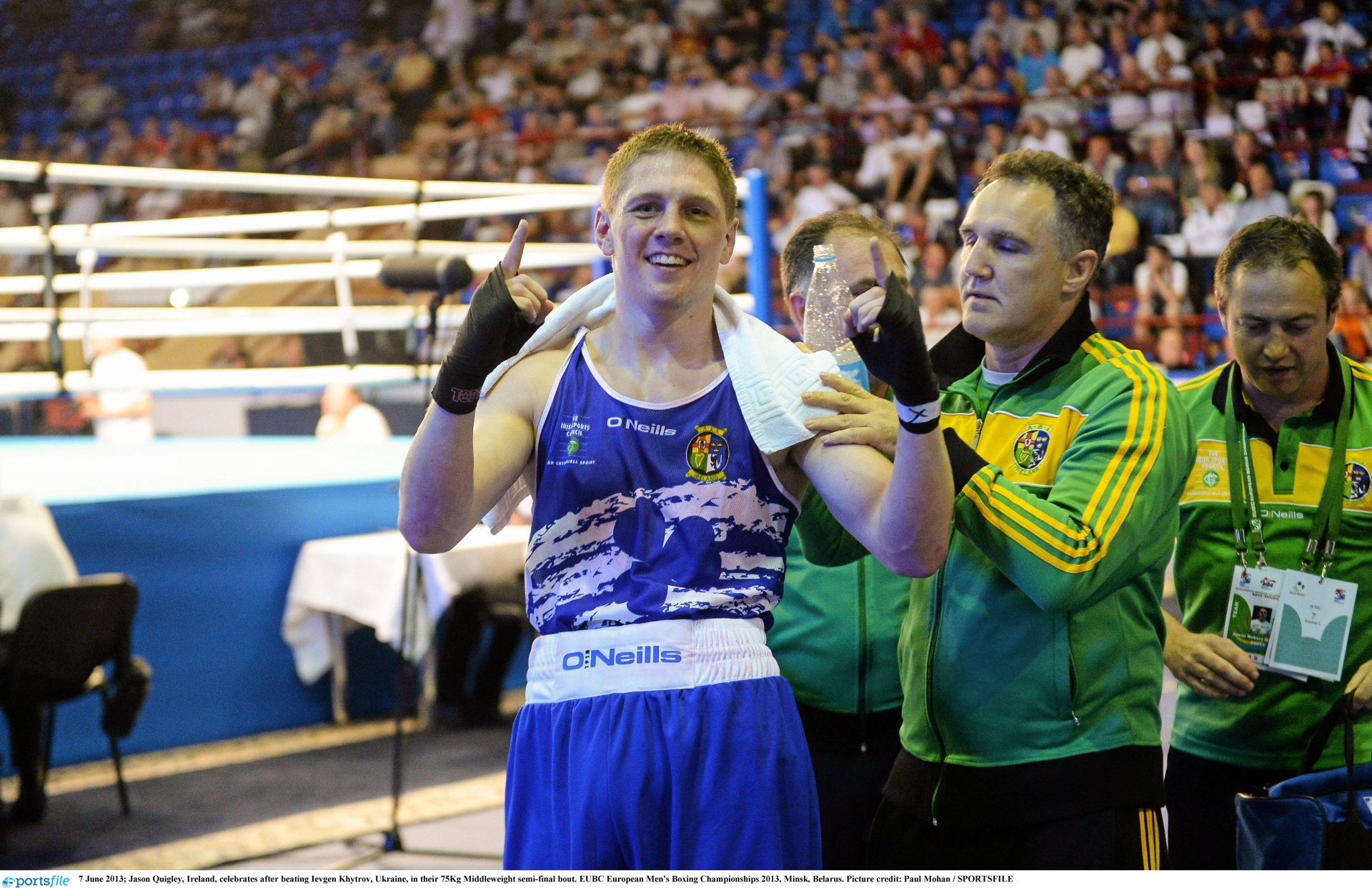 “When I won the European gold, deep down inside me I knew then I belonged there and I should be confident.
Quigley’s biggest scalp to onlookers was in the form of Evhen Khytrov, the Ukrainian who was the reigning World Champion at the time. Quigley defeated Khyrtov in a semi-final, but it was the defeat of Haertel that stands out for the Finn Valley man.

“Darren O’Neill was the man in the seat when I was coming. When I went to those Europeans, there was a feeling around the place that the Irish number 1, O’Neill, wasn’t there. The number 1 was there - an even better number 1. When I won the Europeans, I was Jason Quigley and not ‘Ireland’s number 2’. People recognised me and knew me then. Khytrov was a massive scalp, but the Haertel one meant more.”

Quigley became the first Irishman to compete in a world elite final later in 2013, losing to home favourite Zhanibek Alimkhanuly in Kazakhstan. 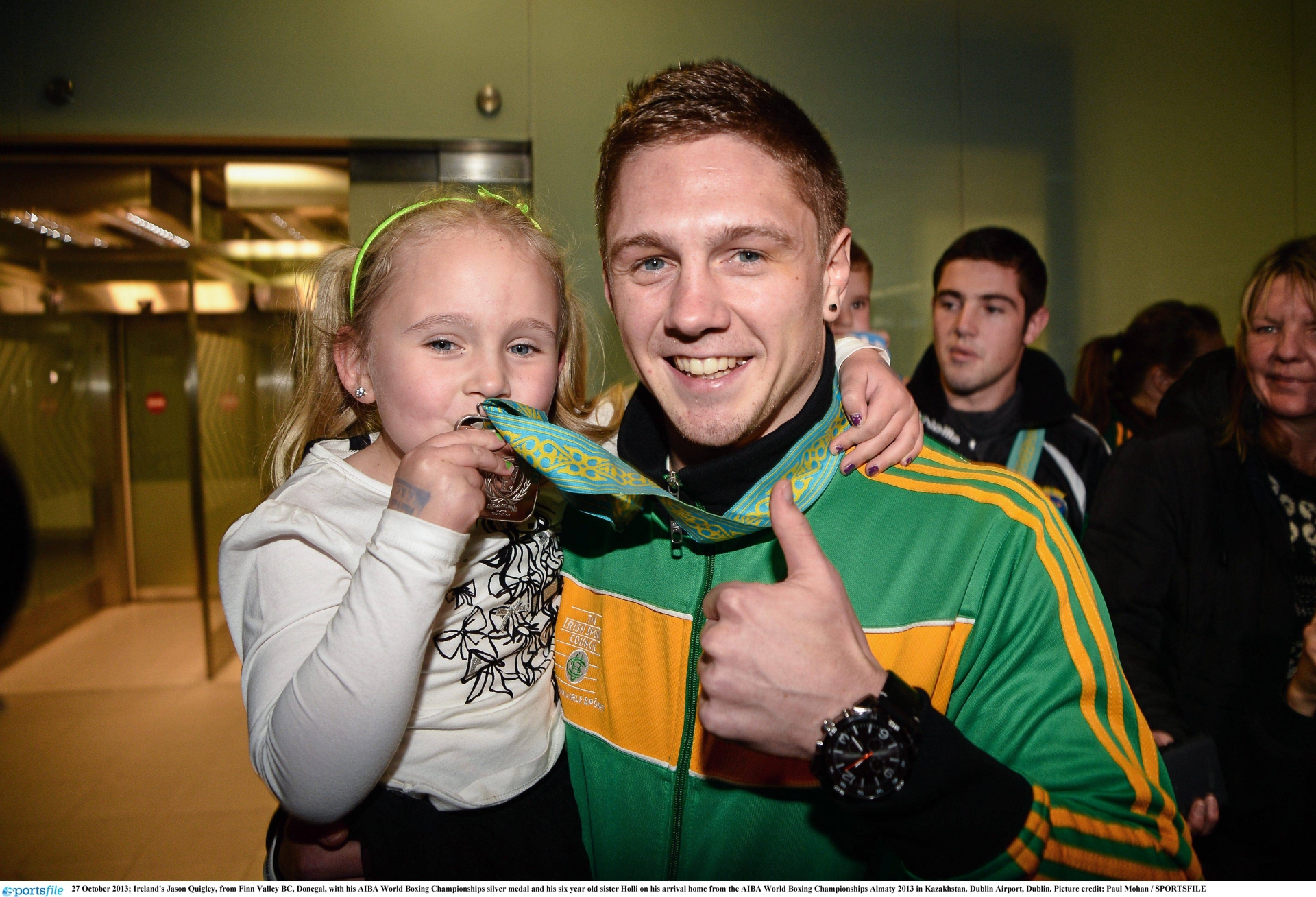 He felt as if he was living his dream as he weaved his way through the World Championships. “I looked out of my hotel window in Kazakhstan and just stared at the horizon. All the time I was thinking: ‘I can become the champion of this world’.

“That was something that I aimed for and strived for. I was in such a good place and I loved my routine.”
He was the number one-ranked amateur middleweight before ditching the amateur vest in search of his professional dreams.

Now, Andrade and 12 rounds of action stand between Quigley and the realisation of a dream he first had above a Donegal Town bookmakers, where the family lived, in the 1990s. 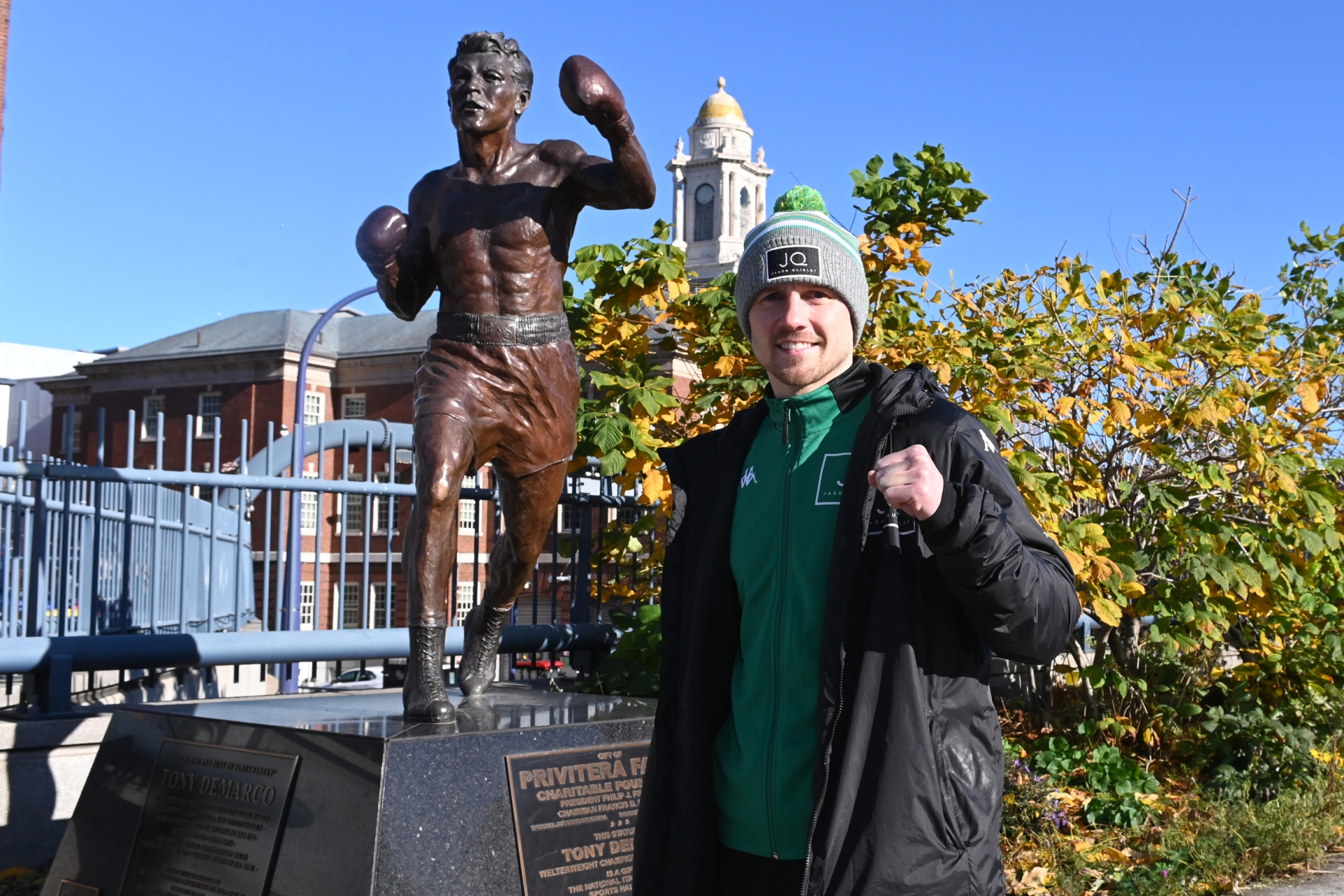 “Everyone has me as the underdog,” he says. “I can see their reasoning, but they haven’t been with me and they don’t know what I'm going through in the gym, what I’m doing, the work I’m putting in or the improvements that I’m making.
“Inside me, in my heart and mind, I know I’ll give him a hell of a fight.

“I think it taught me a lot both inside and outside of boxing to kind of just live the day because as you all know you can take nothing for granted in boxing - it is one of the most up and down sports in the game.

“For me, I’m in the perfect stage in my life and my career to deal with this situation. I’m not the young kid now living for the whole excitement of fighting for a world title. Of course inside I am excited and looking forward to it. But at the end of the day this is just another fight for me of course there is a lot more on the line.

“In terms of my outlook and my focus this is just another fight and I am training my absolute ass off in the gym to get that W (win). To get that W will mean so much in this fight than in any other fight. So there are obviously bits of excitement there that I am learning to control and learning to tunnel vision and focus on the things that matter – getting to the ring one hundred percent the best person I can be in the fight.”

Elm Street is busy as Quigley emerges with a small entourage. It all feels right again. “I feel as if this is exactly where I am supposed to be.”