‘Geraldine is a special player and an even better person’

With Geraldine McLaughlin winning her first All-Star last Saturday night, Chris McNulty spoke to some of those who know her best 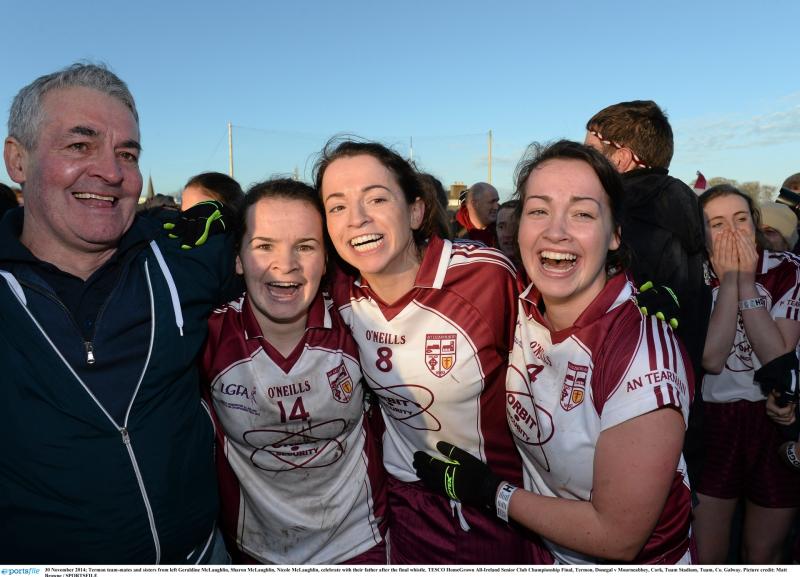 Geraldine McLaughlin listened intently to Francie Friel’s prophetic words. Friel was appointed manager of the Termon ladies for the 2014 season. He had ambition. The All-Ireland club crown was in their sights. In order for that to happen, Friel told his new captain she would have to ‘blow it out of the water’.

McLaughlin scored 25-35 across seven games of a magical journey that ended with All-Ireland glory, including 3-8 in the final against Mourneabbey.

Friel remains miffed that McLaughlin’s exploits that year didn’t yield an All-Star - an award that is finally McLaughlin’s after, at the sixth time of asking, she was named on the 2021 selection.

“I don’t know how it has taken until now,” he says. “She should have gotten it in 2014 for what she did for Termon alone. She definitely shouldn’t have had to wait this long.”

The ladies football set-up in Termon was first founded in 1992, led by Seamus Friel and James Harkin.
Having disbanded again, Harry and Maura McGlynn helped to lead a revival in the early phase of the new millennium with
Celine McFadden and Eileen Kelly keen to start an underage system.

“We had no team so we went around looking and there was a good squad of girls in the McLaughlin house,” Harry McGlynn says. “We were scraping around to get enough for a team. If you were a girl in the parish, you were targeted.”

Roisin McCafferty was a couple of years older than McLaughlin and was nabbed in the recruitment process too.McCafferty is closer to McLaughlin than most. They grew up just a few hundred metres apart. McCafferty would hear the McLaughlin girls out playing and run from her house in Drumbrick to the McLaughlin home at Clonkillymore.

“We started when we were in first or second class at school in Cumann na mBunscoil,” McCafferty says.
“Geraldine was only a wee toot of a thing, but she wasn’t afraid to get stuck in. She was something special. You just knew that she was gifted.”

Friel managed the Termon Under-12s, which included a 10-year-old McLaughlin. Even then, Friel knew he had a gem.
“I remember one day in a wee blitz having to stand up for her because she was getting special attention, even from the boys on the opposition teams,” he says.

“She stood out a mile. She was playing around half-forward in the nine-a-side stuff. Everyone would give Geraldine the ball and just shout: ‘Go!’”

A call to McLaughlin, naming her as the captain, was Friel’s first port of call after he got the Termon senior job for 2014.
“Geraldine had everyone’s attention,” he says. “The players needed someone who would back it up, who would train harder than everyone else, who would push the limits. 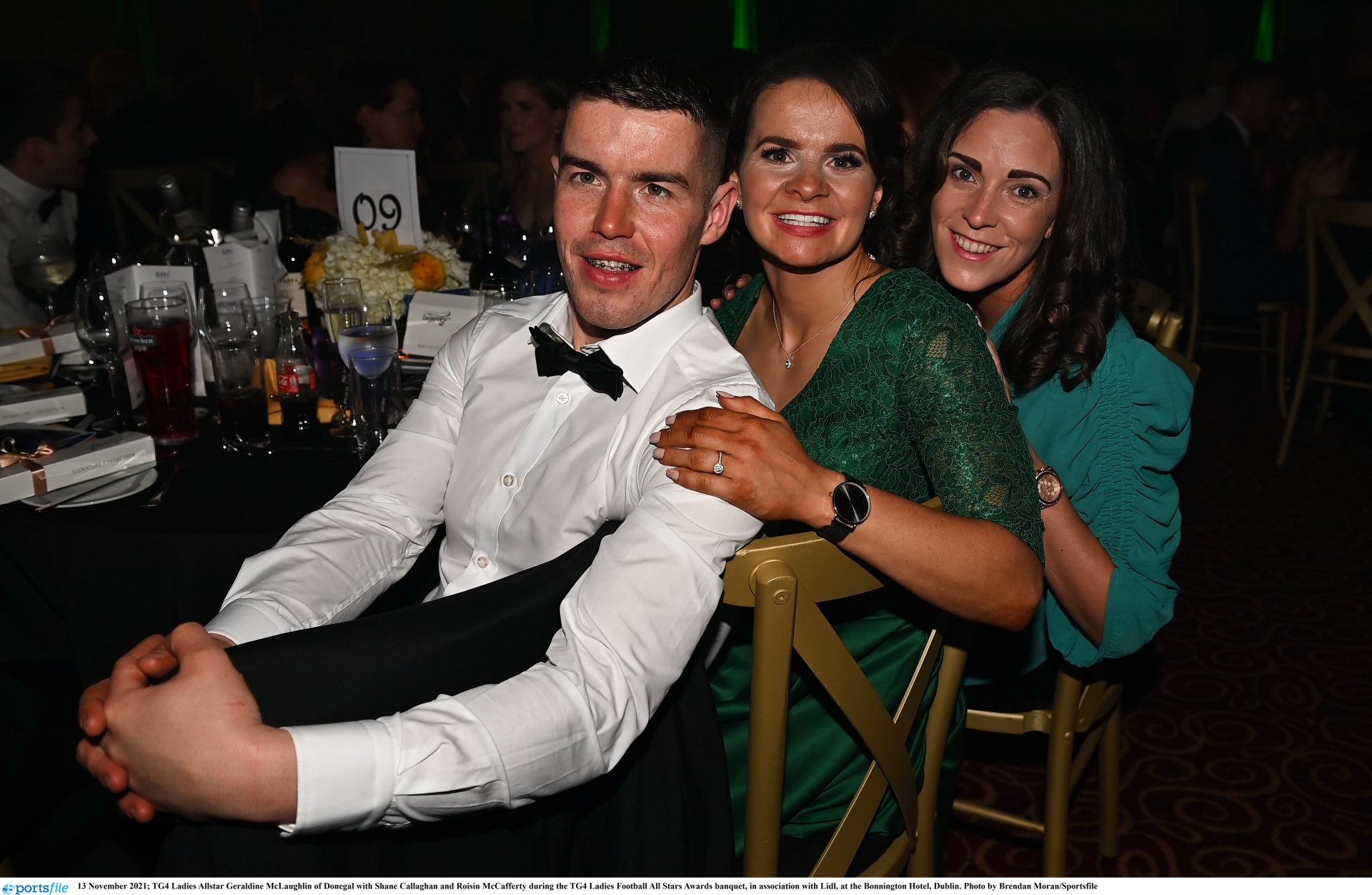 “She was unreal to coach. She would do everything and she took everything on board. If I had said someone had to be killed, Geraldine would have killed.”

McLaughlin, having plundered 5-3 in the semi-final against Moville, scored 3-10 in the Donegal senior ladies final of 2014 when Termon defeated Glenfin.

“She’s a torture to mark,” says Katy Herron. “We’ve had a lot of good battles. It’s been harder to come up against Geradine with getting to know her so well playing for the county. She’s an extreme talent.

“Back when I was a full-back all the time, it was ‘easier’ to mark her because that was my position. Going back to mark her this year was different. If you try and dive in, she has too much in the locker to turn and burn you - and she can kick points all day.”

Herron’s first close encounter was the 2010 Comortas Peile na Gaeltachta final in Belmullet. Termon edged Glenfin after extra-time on a day when the Burn Road side gained the confidence that they could beat the An Gaeltacht Lár outfit.
McCafferty, McLaughlin and her sister Nicole and Dara Kelly, grew as best friends before winning as best friends.

“You always just knew that Geraldine was gifted,” McCafferty says. “She has a different gear. I don’t say this lightly, but she’s getting better. Everyone ups standards, but Geraldine is different.”

When a 15-year-old McLaughlin featured for Temon in the Sevens, former Donegal forward Nadine Doherty was impressed enough to enquire about the identity of Termon’s number 14. “Jesus, she’s good!” 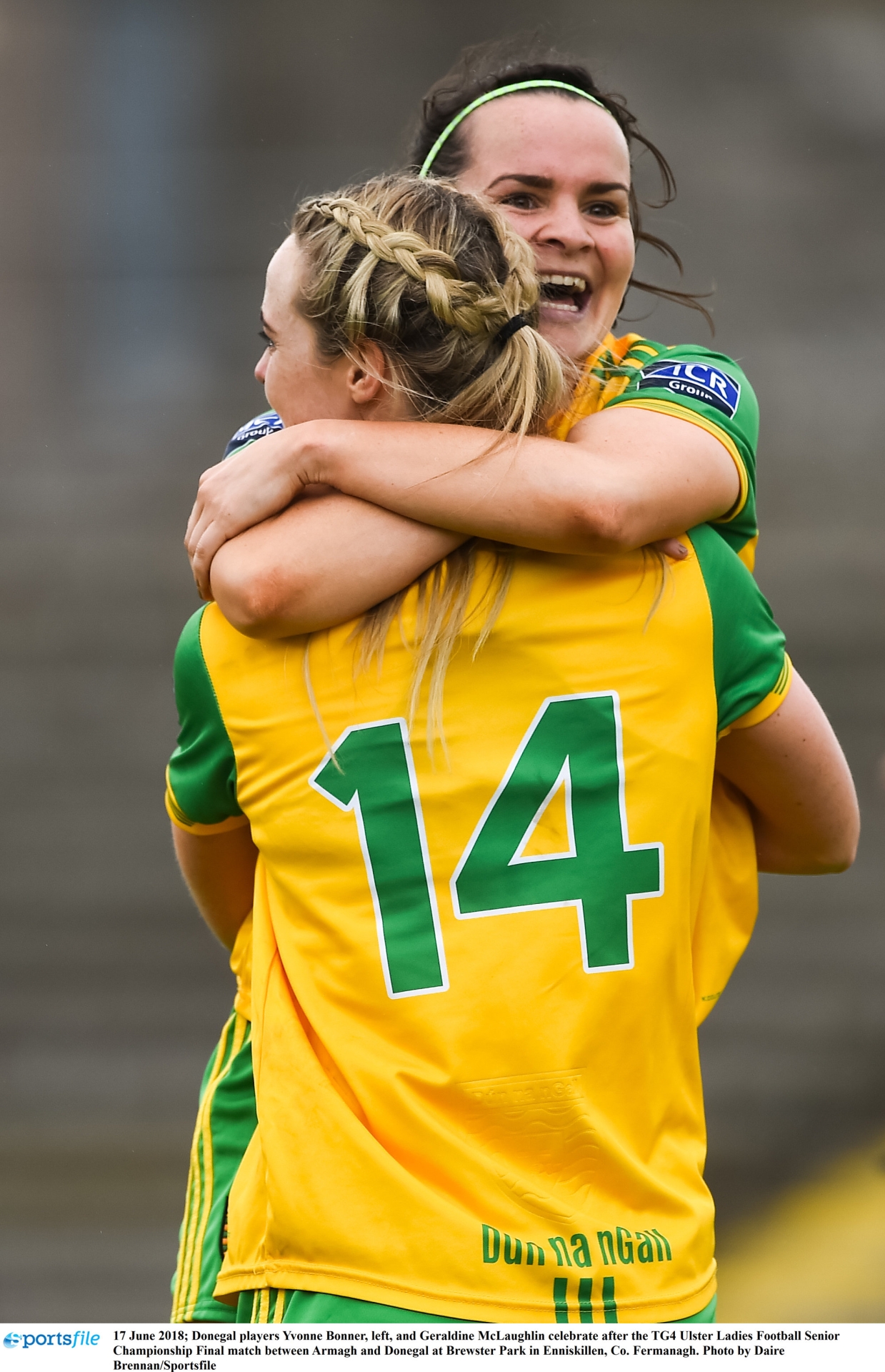 McLaughlin won an All-Ireland Minor title in 2009, scoring 2-6 in a 5-13 to 5-3 win over Clare. Still a teenager, she hit five points as Donegal won the All-Ireland Intermediate crown against Waterford in 2010. Harry McGlynn was assistant manager to Kenny Griffin when McLaughlin was first recruited to a Donegal team.

“She was still an under-12 playing with the under-14s,” McGlynn says. “Her first game was away to Monaghan. We were losing at half-time and we put Geraldine on. She turned the game for us. Geraldine was a star right away. That was the start of it for her with Donegal.”

“You get that challenge every week in training,” Herron says. “You’re trying to manage one of the best forwards in Ireland. Geraldine isn’t overly talkative, but she encourages people through what she does with the ball.

“Having someone like her is just brilliant for the younger girls. She sets the standard for everyone else to watch.”
McLaughlin suffered a cartilage injury during the 2014 Ulster final, when scoring 4-4 against Donaghmoyne.

Dr Anthony Delap administered a pain-killing injection in order for McLaughlin to keep playing.
Friel says: “Geraldine never missed training with it. She led by example and she pushed it on. She carried herself so well during that whole season. She delivered. She blew the lights out. Geraldine is a special player and an even better person.”
McCafferty tells of a woman who has ‘a deep care’ for those in her circle. “We’d die for each other,” McCafferty says.

“Geraldine is competitive for herself, pushing herself on. She is there every day to get a wee bit better and be the best version of herself. Geraldine will have the craic and the laughs, but when it comes to matter, she is serious. She speaks when speaking is needed.

“You could see the older people in Termon at the weekend how happy they were for her. They were so happy and so proud. It’s nothing more than she deserves. She makes us all so proud