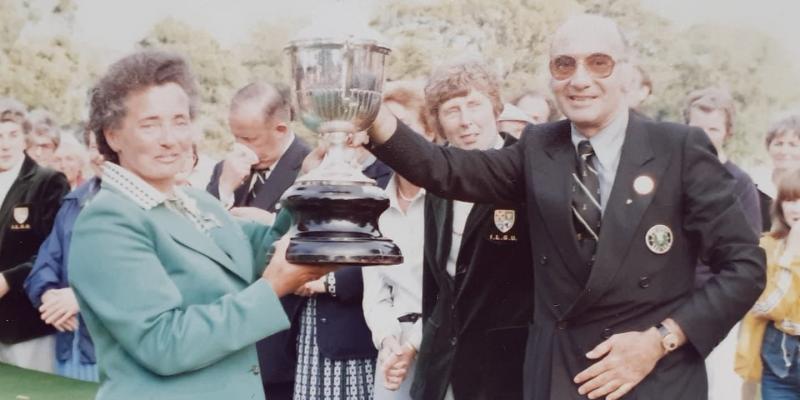 In the annals of Ireland's Golfing history, Maire O'Donnell, a former Curtis Cup Captain and Irish selector, whose home club was Donegal Golf Club Murvagh will be remembered as one of Ireland's most remarkable, unforgettable and highly respected lady golfers.

On Thursday 8th July 2021, Maire O'Donnell aged 94, went to her place of eternal rest , leaving behind a glittering legacy to ladies’ golf.  Lady golfers will be forever grateful and proud of her achievements as a remarkable golfer, a Donegal woman dedicated to the promotion of lady’s golf.

Maire O'Donnell was born into the distinguished McMullin family in Ballybofey , County Donegal,  her father was a lawyer and her mother a doctor.   Maire’s early sporting achievements were on the tennis courts where she was an accomplished player and she represented her local tennis club  with distinction.

It wasn't until she got married to  the late Louis O'Donnell M.R.C.V.S. in 1952 and moved to Mountcharles that she took an interest in golf accompanying her husband to the golf course.  In the early years of marriage, she often said that she felt that she might have been left at home if she didn’t get out there and play.

Maire and Louis have one son Brian, and as well as being a full-time mother, Maire assisted with the office side of her husband Louis’s busy Veterinary practice . Moira loved horse riding and took her horse on a daily canter.  she was also very involved in charity work,

Maire was a member of  four golf clubs,   her home club  Donegal Golf Club which was first based at Tullycullion on land donated by the Temple family, owners of the world-famous Magee Clothing.  After a  decade, the  Donegal Golf Club moved to the  Murvagh peninsula, also owned by the Temple family where a links course was designed  by Eddie Hackett and since then,  enhanced by Pat Ruddy.

Maire’s other club membership included Sligo GC. Bundoran GC and Lahinch GC. Maire, her husband Louis  and their fellow Donegal golfers went  to Lahinch GC Co Clare every summer in the 50’s  Its popularity died for a time in the late 60’s but was revived by Maire and  continues today.

It was at Lahinch GC that Maire first came to fame Internationally when in 1973 she broke the course record with a 68, which was 7 under par and earned a plus one handicap.

Maire gave much credit for her golfing success to the late Christy O’Connor, Professional (1951 until 1957) at Bundoran G.C who took her under his wing and coached her and within 8 years she reached single handicap status .

In 1972 Maire became vice-captain of the Irish ladies Golf team,  a position she held for two years before becoming captain.  Maire served as Ireland’s Captain  in the European Team Championship from  1977 -  1979, as well as in the Home Internationals in 1977, 1978 and 1979.  In 1978 for her achievements in golf Maire was honoured as  Donegal Sportswomen of the year

The European team championships were held in Ireland in 1979 which was at the end of Maires term as Captain and the Irish Ladies Golf Union invited Maire to stay as Captain for a third year.  Maire made history that year and brought great honour to her country and her beloved Donegal when she captained the 1979 Irish team to victory in the  European women’s Amateur team championship  at the Hermitage G.C.  This was the first victory for the national team in 72 years and it became a milestone in the history of lady’s golf in Ireland.

In recognition of her personal achievement, Maire O’Donnell was invited to be Vice-captain of the Curtis Cup team.  Two years later she  was appointed non-playing captain of the Great Britain & Irish  team which took her to the World Cup games in North Carolina where the team made an excellent showing and finished in fifth place.   She also captained the Great Britain & Irish team against Europe in Spain.

In  1982 she received her greatest accolade when she was invited to captain the  Curtis Cup team against the USA, to  play in Denver,  Colorado, a competition in its 22nd year.   That eight-member 1982 Curtis Cup team included three Irish players for the first time. The three were McKenna, Madill and Nesbitt.  The  Curtis Cup captains go back to 1932, and this biennial tournament is played by the best women amateur golfers and Maire had the distinction of being one of only two Irish women to be accorded this honour.  Maire had at this stage of her life reached the peak of golfing success having captained the three top golfing teams.

Maire served on the ILGU at various times  Her skills as an administrator were as ably matched by her achievements on the links.   She played a major role on the Ladies Golf Union Council as one  of two representatives, attending meetings in St. Andrews Golf Club,  Scotland five times a year.   She attended all the British championships  in an administrative capacity or as a referee.  She often had to chair the International selection committees, this required Maire to be present with the selectors at games.

Maire O’Donnell was a loyal member of her home club Donegal Golf Club and in the early days when the club was newly formed, she gave it her whole hearted support.  As well as her fundraising with raffles etc she ran the lady’s section, organising competitions, handicaps, cleaning parties, organising  ladies in turn to provide tea and buns after the competitions and this social tradition, providing tea continued well into the Murvagh days, helping newcomers get to know existing members.

Maire devised a handicap system for Class B’s, the newcomers, and when they reached 120 grosses, they joined the main draw.  She was instrumental in encouraging beginners and helping all the good lady golfers reach their full potential.  teaching them to be masters of their full swing.   As a result of her instructions  many ladies at all levels still hum the Blue Danube today as they swing the club and try to copy Maire’s rhythm.  As well as her involvement in Murvagh, she was readily available to other clubs in both county and province  and every competition and handicap secretary in the county had Maire’s number. Maire continued into  her late seventies to  giving  free golf  lessons on  summer evenings at Murvagh.  To us ladies in Murvagh Golf Club and all the lady golfers in Donegal, Maire O’Donnell was very special.

The Annual  Donegal Shield ladies  competition was started by Maire O'Donnell in 1975 and continues today.  Maire set up this competition to promote social interaction between golfers in Donegal clubs.  Thus, providing an opportunity for lady golfers from every club in Donegal to come together on one day annually to represent their respective clubs

On the occasion of her 80th birthday, April 2007, the clubhouse was the setting for ‘This is your Life’ for Maire. The club, her friends and family and members of the I.L.G.U. all came together to honour the "First Lady of Donegal Golf", a title this woman truly deserved. Her 90th birthday was a quieter affair with a cake and celebration for her in Donegal Golf Club attended by all the lady members following their regular Tuesday round of golf .

“There will  never be another Maire O'Donnell”.

Some of her more notable achievements:

Winner of Connacht Championship in Bundoran in 1976

Donegal Sportswomen of the year for achievements in golf in 1978

Member of Interprovincial team for Connacht

Captain of the Irish team for Home Internationals in Wales

Member of the Irish team playing in Douglas Cork

Maire O’Donnell lived a full life and to quote  Oscar Wilde "To live is the rarest thing in the world. Most people exist, that is all."