Rosses Radio is returning to FM radio dials this week, with a new license that will expand the station's broadcast opportunities in the new year

Station manager commends all those who volunteer for shows 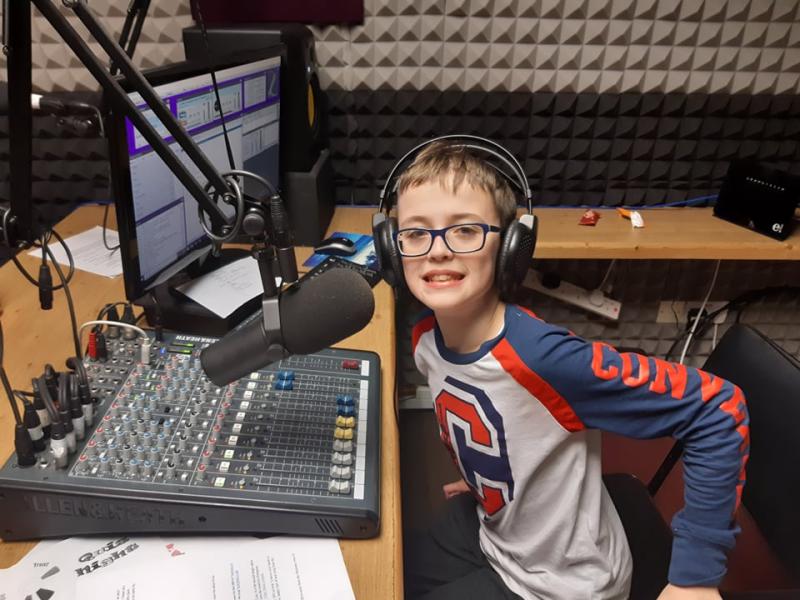 James McGinley, 12, who rocks the radio from 5pm

Rosses Radio is returning to FM radio dials this week, with a new license that will expand the station's broadcast opportunities in the new year.

Rosses Radio will be broadcasting live at 98.6 on the FM dial every Saturday, 9am to midnight, starting on Saturday, December 14th. The station will continue to stream worldwide during the same Saturday hours on the Rossesradio.com website, and on Stream.com and Liveradio.com, available via smartphones.

The new license, issued by the Broadcasting Authority of Ireland, will give the station the flexibility of extra days to broadcast during special events, such as the Mary from Dungloe International Festival and Heritage Week in Donegal.

Rosses Radio has been an important community voice since July 2012, when the station began streaming on the internet from its studios in Dungloe. The station's first 30-day license was granted by the broadcasting authority in July 2017 and renewed in 2017 and 2018.

Securing the license to return to the FM dial this year was the result of a considerable amount of work by station staff to put the station in a position to apply for the license. Carol Ann said it is the hard work of Rosses Radio volunteers that has made the station such a success.

The station is served by 34 volunteers who come not only from the Rosses area, but from Falcarragh, Creeslough, Gweedore, and Letterkenny.

"I wish to extend sincere thanks to all our loyal volunteers," Carol Ann said. "Many of them give up to three days a week of their time to ensure that the shows are produced in a professional manner and that the station's other social media platforms are kept up-to-date and our podcasts are available in a timely manner."

She also extended sincere thanks to all the sponsors of Rosses Radio from the Rosses and farther afield, and to everyone who has organised and supported fundraising activities throughout the year.

"Without this we would not be able to exist," she said.

Rosses Radio will continue its broad and varied Saturday programming, which includes a range of music, news and sport,  public events, and documentary.

The station's Saturday programming begins at 9am with The Morning Show from 9am to 12 noon, a magazine of local and current affairs, interviews and community news; The Golden Hour, 12 noon to 1pm, a request show featuring showband music and other yesteryear tunes; The Sports Show, 1 to 2pm; The Afternoon Mix, 2 to 3pm, a request show with an eclectic mix of music; Folk Like Us, 3 to 4pm, featuring local, national, and international folk and traditional music; Guth an Phobail, 4 to 5pm, an Irish-language programme with guest interviews on local affairs; Rock Republic, 5 to 6pm, a request show for rock fans; Off the Cuff, 6 to 7pm, youth programming with requests and interviews; Simply Country, 7 to 8pm, an Irish and American country music request show; Alternative Options, 8 to 9pm, a mix of music programmes, from jazz and classical to Motown and soul, as well as documentaries on local issues.