Special Mass: John McGlynn (102) and his dear wife Bridie McGlynn (94) to be remembered 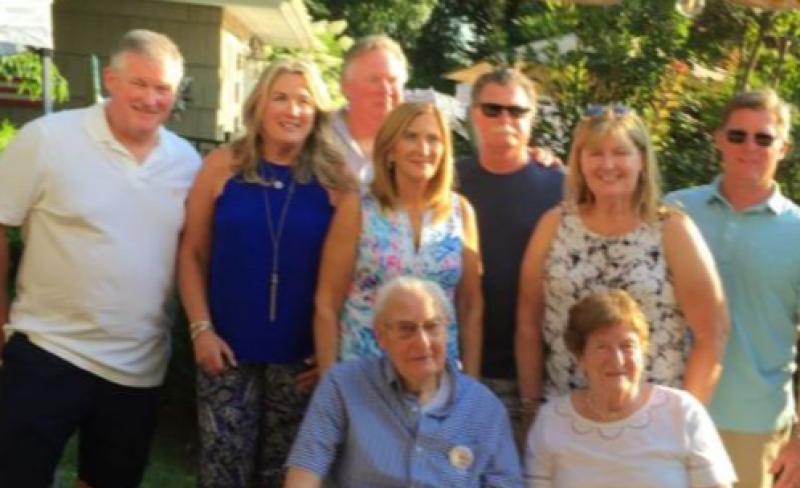 The McGlynn family share close ties with the Rosses

A well known Donegal man and his wife will be fondly remembered at a special Mass in Dungloe this Saturday evening.
John and Bridie McGlynn both passed away recently, John's death taking place in April and Bridie only last Wednesday.
The couple lived for many years in the United States, but Donegal always had a special place in their hearts.
John, of Brick, New Jersey, passed away peacefully on April 19 last at the age of 102 years.
His dearly beloved wife Bridget (Bridie) McGlynn, Muldoon, 94, passed away peacefully at home in Brick on June 15.
John was born in Scotland on July 31, 1919. His family moved to Dungloe when he was four years of age. The couple met and fell in love in London, in 1951. Bridie was studying nursing in London where she received her registered nurse degree and certification as a midwife. She was born in Aughnasheelin, County Leitrim.

Inspired by his sisters Hannah Boland and Mae O’Donnell, John left London and moved to United States, like many hoping to make his fortune there.
Shortly after, he was delighted to be joined by his loving Bridie and the two were reunited after a short period apart. They married and settled in Bayonne, New Jersey, in 1952 and became the proud parents of seven wonderful and loving children.

Dedicated to faith, friends and family
John and Bridie enjoyed a happy life and were proud parents, grandparents and great-grandparents. They also enjoyed a large circle of loyal and trusted friends.
They were very much dedicated to their family, faith, and community. Both played a central role in the communities they lived in and were fondly looked upon by neighbours and friends.
John worked at Western Electric and AT&T until his retirement in 1985.
John and Bridie resided in Bayonne until 1998, at which time he and Bridie moved to Brick, where they spent the last 24 years.
They often resided in homes where number seven was on the door. They were blessed to have seven wonderful children, 17 grandchildren and two great grandchildren.
While residing in Bayonne, John was very active in the Irish community, the Knights of Columbus, and the Saint Vincent de Paul organisation in his parish. Bridget was very active in the parish communities of St. Vincent de Paul in Bayonne and the Church of St. Martha in Brick acting as a Eucharistic Minister at both parishes. She was highly involved in various other religious organisations including the Society of St. Vincent de Paul and New Jersey Right to Life.
Bridget was also very active in the Irish community and was proud to be named the Grand Marshal of the Bayonne St. Patrick’s Day Parade in 1997.
Bridget was also named Irish Woman of the Year by the Irish American League of Bayonne in 1980.
Upon moving to the shore, Bridget became a member of the Women of Irish Heritage of the Jersey Shore.

Irishman of the year
John was the past president of the Donegal Association; the past president of the Irish American League and a member of Ireland’s 32 Club.
He was named Irishman of the year in 1980 and was the Grand Marshal of the Bayonne St. Patrick’s Day Parade in 1986.
He took his strong commitment to his faith and Irish heritage to the shore where he was parishioner of The Church of St. Martha and a proud member of the Friendly Sons of the Shillelagh in Belmar where he was honored as 2018 Irishman of the Year and developed many great friendships and made lasting memories.

Talented team of 1940
John was a talented Gaelic footballer and was so proud to have been inducted into the Dungloe Sports Hall of Fame as a member of the Dungloe team that won the Donegal Senior Football Championship title in 1940.
One of John’s favourite memories was that fateful day when Dungloe played a Ballyshannon side and beat them 3-8 to 1-3 to take Donegal's top title over eight decades ago.
He was a prominent player on that team and he used to recall the other key players: C Campbell, J McGlynn, M McGonigle, P McPaul, J Breslin, J McGarvey, D McGarvey, S Gallagher, H McGarvey, P Sweeney, J O'Brien, J Mulhern, W Sweeney, E Woods and N Sweeney.
John had many fond memories of playing Gaelic in the early days.

Travel
John and Bridget loved to travel the world and they returned to Ireland every summer to spend time with family. They also very much enjoyed sailing on countless Irish-themed cruises with dear friends.
John and Bridie often attended the Mary from Dungloe Festival and the couple and their family always enjoyed their time in the Rosses.
John and Bridie always chose the Mary of Dungloe for Bayonne. Over the years, the Dungloe band visited their area on St Patrick’s Day much to their delight.

Lovingly remembered
John and Bridie are survived by their seven children: Sean and his wife Nancy, Eileen Finck and her husband Mike, Kevin and his wife Laura, Mary Rose Van Woudenberg and her husband Ed, Michael and his partner Maureen Kosakowski Ruane, Bernadette Mastowski and her husband Mark, and Kieran and his wife Stacey; their grandchildren, Megan, Michael, Lauren, Christopher, Caitlin, Aileen, Alanna, Devan, Cara, Brenda, Connor, Colin, Kirsten, Chloe, Ed, Kylie and Cameron as well as their great grandchildren Lilah and Cameron.
A Mass in their memory will be celebrated on Saturday at 6.30pm in St Crona’s Church, Dungloe.