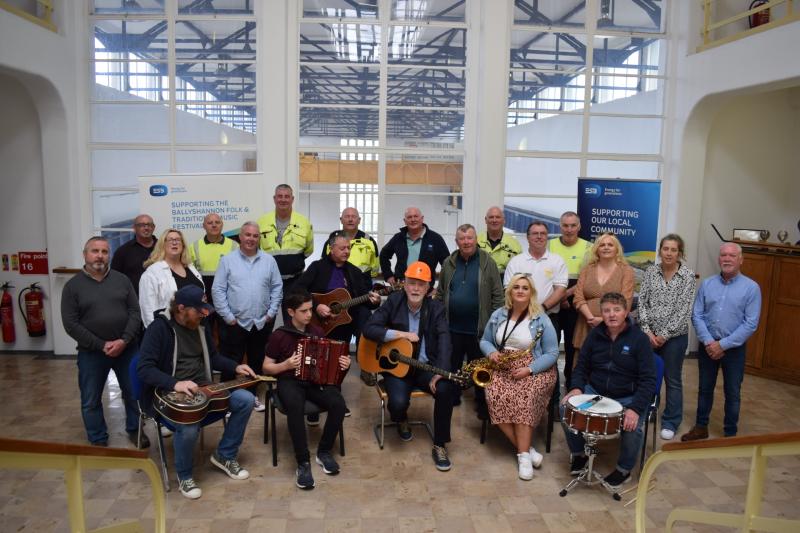 The esteemed Charlie McGettigan was one of a number of talented musicians who gathered at Cathleen’s Fall power station to launch the Ballyshannon Folk and Traditional Music Festival.

And, as happens, when such enthusiastic musicians come together, there were some excellent impromptu performances. Their joy of playing and performing was clear to see, and bodes very well for what is to come during the festival weekend.

Charlie McGettigan will be joined by Paul Harrington on Thursday evening in the Abbey Arts Centre Harrington as they celebrate their 25th anniversary of winning the Eurovision.

He told the Donegal Post /DonegalLive.ie that after the restrictions of the Covid-19 pandemic over the last two years, he was very much enjoying being back on stage.

“It is great to be back and busier than ever with the festival scene this time of year,” he said.

“I am working with Paul Harrington and doing solo stuff as well.

“It is a great time to be back playing, and hopefully it will continue into the winter.”

Having grown up in Ballyshannon, the town and its famous festival are close to Charlie’s heart.

“I’ve played the folk festival six or seven times before,” he said,. “I played with my band Jargon, and with Maura O’Connell, and I played a few times on my own.

“It is great to see the festival going from strength to strength.”

One act that Charlie is particularly looking forward to seeing at this year’s festival is his nephew, Padraig Bennett.

“Padraig was one of the winners at a showcase event for the festival and he gets to progress to performing on the main stage on Saturday night.

“He is 18 years of age and has just finished his Leaving Cert.”

Indeed, the showcase and the launch events have shown that there is no shortage of interest, skill and commitment to folk and traditional music among young people in Donegal.

And having being starved of live entertainment for two years, there is certainly an appetite and newfound appreciation for events such as Ballyshannon Folk and Traditional Music Festival.

The full programme of events can be found at www.ballyshannonfolkfestival.com