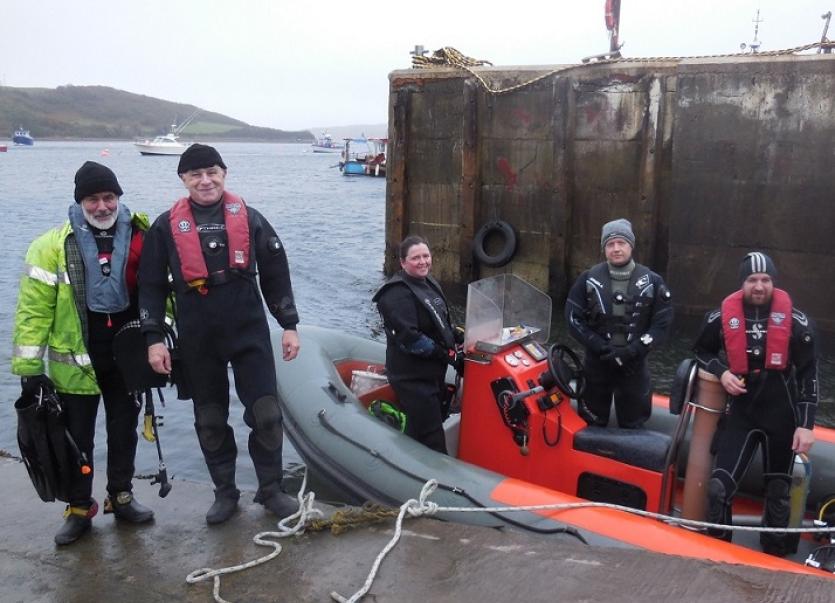 Sheephaven divers enjoyed a spell of more settled weather last weekend and got diving in the protected waters of Mulroy Bay as a result, even though the effects of the recent northerly winds were still evident on the exposed dive sites around the coast.

Saturday morning's dive was at Pan Rock, in Broadwater Bay near Cranford pier, and involved a single-boat dive party operating in two sticks.

Maximum depth at this site can go off to more than 30 metres, but is enjoyed at its best in shallower depths of no greater than 20 metres.

In-water conditions were good, with visibility at around 10 metres in the upper reaches of the water column, but very dark from 20 metres onwards.

Water temperature on this site changes rapidly depending on surface conditions, hence it cools here much more quickly than out at sea and on Saturday the temperature was less than 11 degrees Celsius – significantly cooler than of late elsewhere.

Sunday morning's dive was back up Mulroy Bay, with one stick deployed at Campbell’s Bed, while the second stick returned to Pan Rock.

Surface conditions were good with fair weather but a northerly wind, which had blown out the preferred dive sites out at sea, hence the decision to return to Broadwater Bay.

Campbell’s Bed is a long submerged reef that runs in a generally north-south direction for nearly 200 metres. It has a maximum depth at its southern end of more than 25 metres and at its shallowest is only a foot or so from the surface and a bit of a hazard to shipping as a result.

Dive times of up to 35 minutes were recorded at Campbell’s Bed, after which the dive party moved to Pan Rock were the second stick completed a 40-minute dive to no greater than 20 metres.

Marine life at both these sites varies at the different depths, with little or no life in the darker, deeper regions compared to a varied and abundant ecosystem in the shallower depths, where a diver can see a range of anemones, sponges, sea squirts and some of the bigger fish species such as dogfish, gobies, blennies and very occasionally a thornback ray.

In Portnablagh on a Sunday morning, Willie Sheridan and Eddie McFadden led the club snorkelers across the harbour and indeed further across the bay, where sea conditions allowed. As always, Sunday mornings in Portnablagh are not complete without breakfast in Lizzie's, for which we are truly grateful.

Finally we wish to congratulate a dive colleague for their ‘nautical’ success - albeit with a very tenuous connection - when Robin Law was part of the cast of the Gilbert and Sullivan opera, ‘The Gondoliers’ last week in An Grainán Theatre in Letterkenny. Robin had the role of Annibale and well done to all involved as it was a great night’s entertainment indeed.