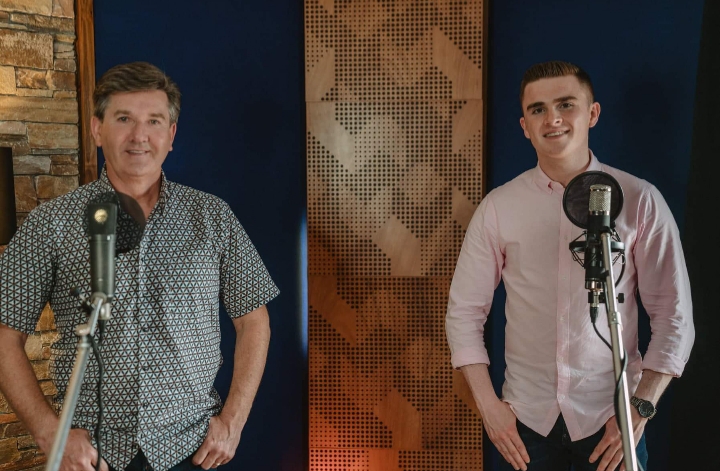 Penned by talented Inishowen singer / songwriter, Shunie Crampsey, 'Don't Take the Good Times for Granted' takes the form of a conversation between a young man and an older contemporary. The combination of Daniel's well-loved vocals with David's powerful delivery is sure to make it a track for fans of all ages.

Speaking to Donegal Live, Highland Radio presenter, David (22) said 'Don't Take the Good Times for Granted' contains a message which will resonate with many, in light of the ongoing coronavirus pandemic.

Daniel said: “I am delighted to have had the opportunity to record this duet with David. He has a great voice and a super personality.

“We were blessed that Shunie Crampsey wrote the song especially for us. Shunie is a great writer and I loved the song as soon as I heard it.”

Explaining the origins of the ballad, David said Daniel and he were originally supposed to sing a duet at the Highland Radio 30th Birthday bash last March.

David said: “Whenever the concert was cancelled because of the pandemic, we said, 'Well, why don't we get together and record something instead?' So, we contacted Shunie and we spoke about the kind of song we wanted. 'Don't take the Good Times for Granted' is what Shunie came up and it is definitely very relevant for the times that are in it.

“It is good to have someone like Daniel at the other end of the phone, as a mentor and a supporter. He was very keen to get involved with me and do a duet and I am very lucky that his management and his record company have taken me under their wings to really promote the song.

“It is just great to be releasing a song with Daniel. When I started out in music at the age of 15, if anyone had asked me how I would measure my success, recording a track with Daniel would have been beyond the realms of possibility. I remember going to see Daniel in concert when I was 14. I was mesmerised not only by Daniel, but by the band, the lights, the full show.

“I never dreamt that I would get the opportunity to record with Daniel. It was an honour. Now that we are here and we have done it, it is just amazing. I am delighted. I can't wait to see how it is received. I hope people are going to like it,” said David.

David said 'Don't Take the Good Times for Granted' means all the more to him because it was specially written for Daniel and himself.

He added: “And we have now recorded the song, which is fantastic. I remember sitting with Shunie and he asked me about life and I said, 'You know, maybe sometimes we do take simple things for granted, even down to getting up each morning'.

“The song means a lot to me, in the sense that it is a reality check for whenever you are getting carried away. It is ironic, the song is a huge achievement for me but when I listen to its central message, it brings me back to Earth.

“I can only live in hope 'Don't Take the Good Times for Granted' will top the iTunes Chart and get good radio play. The main aim is that it is well received well by the public, anything else is a bonus. We have the video coming out this week as well so I am excited about that as well.

“In terms of the future, over the course of the pandemic, I have been busy making new music. I have been writing along with Derek Ryan. We have been co-writing some songs and getting those ready to record. Throughout the course of the year, I have been working towards an album. Hopefully too, when the gigs get back, I will be able to hit the ground running and be back and doing what love, singing in front of live audiences and being busy,” said David.

A modest David also thanked Shunie Crampsey for writing 'Don't Take the Good Times for Granted', which was released on the on the DMG TV label. He also acknowledged the support of his family and Daniel O'Donnell.

David has been going from strength to strength in the music scene since he started gigging at the young age of 15. He has had four singles that have topped the iTunes charts under his belt to date, including the track Donegal Doll released when he was just 18.

While David predominantly sings Irish and country music, he has a wide range of musical tastes and influences, performing music from the likes of Tom Jones, the Rock and Roll era, musical theatre and power ballads.

‘Don’t Take the Good Times for Granted’ is available for download on iTunes and to stream on Spotify: