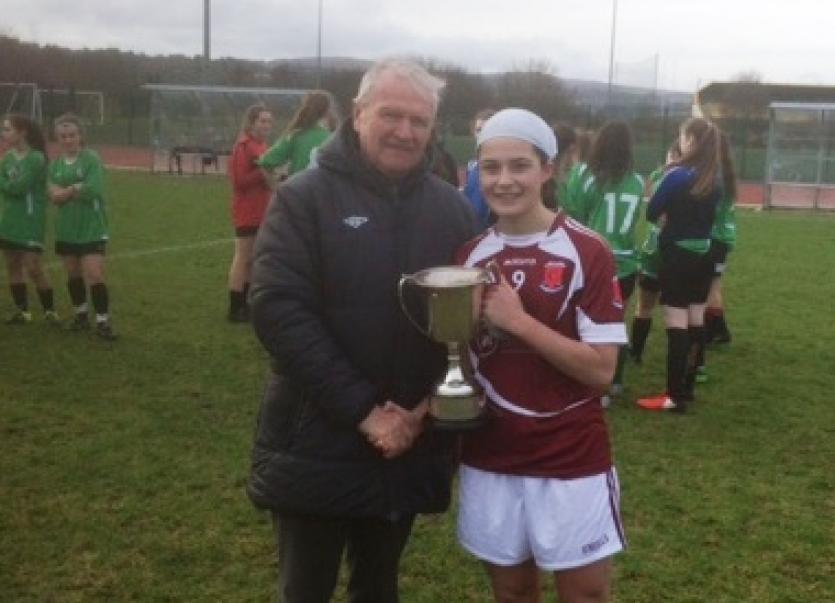 St Columba’s Comprehensive Girls brought the curtain down on a perfect week for the Glenties School with an Ulster Junior Girls title.

Shannon Quinn scored the only goal in this gripping encounter played at the Aura Leisure Centre, Letterkenny, this afternoon.

Left back Quinn struck in the middle of the opening half after St Columba’s and Irish International Amy Boyle Carr had gone close on a couple occasions for St Columbas.

St Columba’s had the better of the possession stakes in the opening 35 minutes, but Moville had chances too.

St Columba’s had a chance early in the second period to go two up, but Sarah Harkin’s fly kick in a crowded box was cleared off the line.

The Glenties girls put on relentless pressure in the third quarter.

But  twice on the break the Inishowen girls went close to tying up the game. Kate McCleneghan, from way out on the left hand side, skimmed Bronagh Gallagher’s crossbar and  Gallagher had to be alert to dent Megan Halvin from outside the box.

The closing ten minutes was played at a frenetic pace as Moville went all out in pursuit of the equaliser.

And with St Columba’s sitting back, they had to absorb sustained Moville pressure.

In those closing minutes McCleneghan twice went close and in the dying minutes Eimear Gillen’s attempted lob came back off the St Columba’s crossbar.

In the end St Columba’s just about hung on for a second Ulster title in the space of three days.

The school’s girls U-16s with all of yesterday’s winning side on board, were crowned Ulster GAA Schools U-6 C champions.

In that final played in Garvaghy on Tuesday, they defeated Rathmore, Belfast, 10-7 to 3-8.