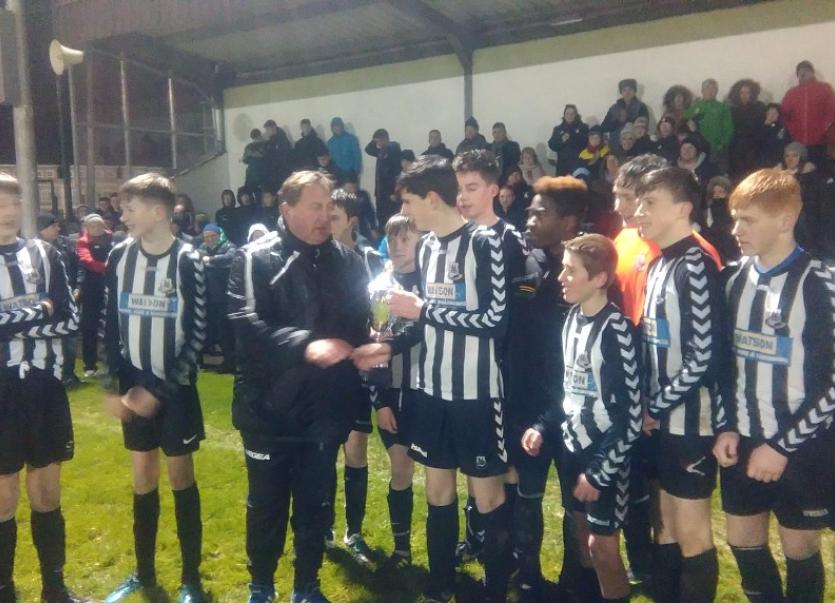 Swilly, winners of the league and a host of cup competitions already this season, had gone into this game as firm favourites.

But they had no answer to a well organised Kilmacrennan side who produced an excellent team performance to deservedly claim the win.

In Joshua Bradley, they had the man-of-the-match. The striker was superb up front and aside from his goals, he caused the Swilly back-line no end of trouble.

Kilmacrennan were also well served by Stephen and Conor Black (who scored two) and the hard-working Carlos O’Reilly who stood out in midfield.

For Swilly, it was a disappointing end to their season. On a damp and dreary night under the lights of Dry Arch Park, they bossed possession in the first half but for all their chances, they couldn’t find a goal.

In contrast, Kilmacrennan were clinical when opportunities came their way. Bradley gave them the lead on seven minutes with Conor Black the creator.

Less than ten minutes later, Black headed in a second from a Stephen Black free kick.

Swilly were shell-shocked and they did their best to find a response with Frankie Campbell, Sean Doherty and Finnian O’Donnell having efforts saved by Kilmacrennan keeper, Patrick McGarvey.

However, less than a minute after the restart, they conceded a third when Conor Black produced a tidy finish into the corner. Three minutes later Bradley got his second and Kilmacrennan’s fourth.

Credit to Swilly, they kept plugging away but further goals followed from Bradley again and a wonderful long range strike from Bobby McGettigan.

Swilly got a consolation goal their efforts deserved right at the end when Tyler Durning’s pass released Kyle McMullen in on goal and he produced a neat finish to beat McGarvey.