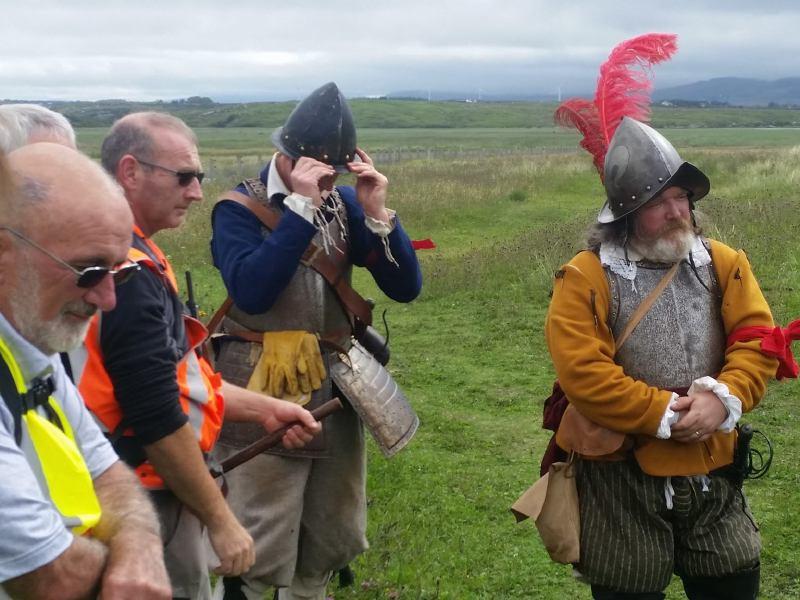 Some of those who took part in Saturday's commemorations

After the Spanish Armada had engaged in four major battles along the English coast culminating in the Battle of Gravelines on the 8th August 1588, most of the 150 ships that made up the Spanish fleet were forced northwards, never to return the way they came.

The Duke of Medina Sidonia, commander of the fleet, gave the order to head northwards, round the coast of Scotland, head as far out into the Atlantic as possible, so as to ‘avoid Ireland at all costs’ and set a course for homeward to Spain.

Our story is about the 900 men who scrambled ashore from the Andalusian hulk, La Duquesa Santa Ana which was shipwrecked off Loughros Mor Peninsula on the 28/29 September, 1588.

It appears that the ship was successfully beached temporarily in or near Tramore strand on September 29. The survivors spent nine days in the area; one camp of ordinary soldiers and seamen encamped at the ship’s side and a second at O’Boyle’s island castle of Kiltoorish (Rosbeg), where the young noblemen and senior officers were stationed.

They were given assistance by the local clan chief, McSweeny Na Doe.

The encampment housing 900 foreigners around the Rosbeg area must have resembled a small town. A similar situation had developed in Killybegs where the crews of La Girona, and two other ships, wrecked in the harbour, had taken shelter and given assistance by the local chieftain, McSweeny Banagh, whose castle was located at the head of McSwyne’s Bay.

Preparations were made to make a one day march from Kiltoorish to Killybegs and ‘a hoped for escape back to Spain’.

On October 8 or 9, the Duquesa Santa Ana survivors, accompanied by McSweeny Na Doe, broke camp and traversed a terrain that would have been difficult with a mountain pass to be negotiated.

The first sight of La Girona which had been lying at anchor in McSwyne’s Bay since September 15, must have lifted the men’s spirits under Don Alonso de Leyva’s (second in command of the entire armada) leadership.

On Saturday last, almost 50 people took part in the first walk in 430 years to mark this march through south-west Donegal, which in the 16th century would have had virtually no roads and no bridges.

We were led by Oireas Historical Services who had set up their own encampment in Ardara for the weekend.

Our two well-experienced and expert guides, John Damien Gallagher and Kevin Maguire, kept us safe especially while on the main roads into and out of Ardara.

Our route began at Seskinmore Nature Reserve, through Sandfield into Ardara and up the Nick (N56). We then took the scenic Roechrow road into Killybegs. At each end of the walk, we unveiled a ‘Footprint’ memorial stone to commemorate what was to become one of the costliest shipwrecks in the history of seafaring, that of La Girona at Lacada Point (Giant’s Causeway) Co. Antrim on October 28, 1588.

Ardara Gap Heritage and History Group and Killybegs History and Heritage Group came together to organise this event as a poignant recognition and commemoration of the many tragedies that befell at least one of the 26 or so Spanish Armada ships wrecked off the Atlantic coast of Ireland in the autumn storms of 1588. About 6.000 men were drowned, killed or captured as a consequence on these shipwrecks.

Both heritage groups wish to thank all those who contributed to this heart-rending event.