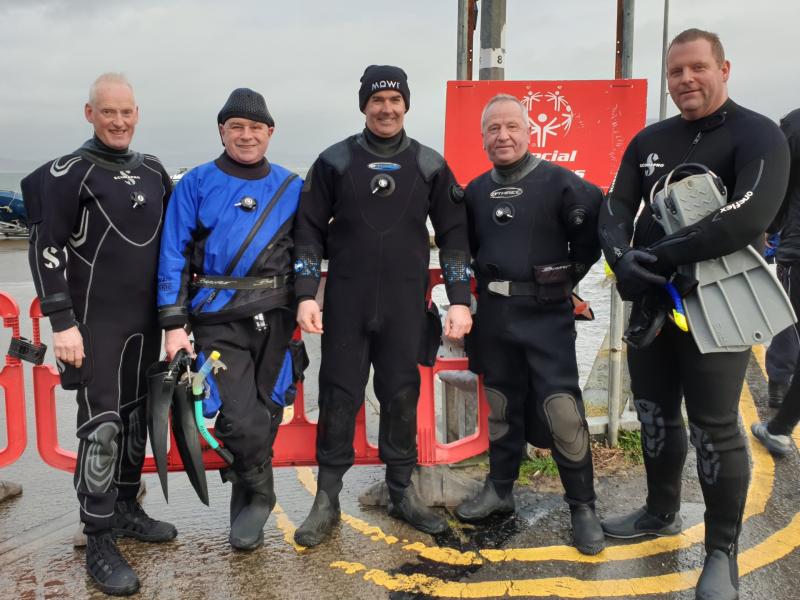 Sheephaven cover divers at the Rathmullan Polar Plunge on Saturday

However, on Saturday Sheephaven divers still got into the water when they provided safety cover for the 4th Annual Polar Plunge in Rathmullan.

With over 200 plungers taking part in aid of the Donegal Branch of Special Olympics the Sheephaven divers, along with the local Coastguard and RNLI crews, were on hand to make sure that the cold shock effect of jumping into water at 8 degrees Celsius didn’t overwhelm anyone.

As in previous years the festival atmosphere at Rathmullan pier was helped along by a number of the plungers jumping in the colours of their various organisations – except of course for GAA TV pundit Joe Brolly, who plunged in the Mayo colours to the delight of many present.

The Army were piped to the waters by the wonderful sound of an Army Piper, while the Naval Service personnel from the LE Samuel Beckett jumped last, but the Gardaí jumped in the greatest numbers no doubt influenced by Sargent Paul Mc Gee

Gartan Swimmers were present to show off their fancy dress and a few open water swimming strokes, while Special Olympians and their helpers took the plunge also.

Sheephaven Divers have provided safety cover for a number of events this year, all of which will have been conducted to provide vital funding for various charities, such as Padraig Mc Fadden’s Tory swim in aid of COPE, followed later in the year by Gartan Swimmers' Inch Mile and Portnablagh swims in aid of the RNLI and Sheephaven S&R and finishing out 2019 with the Annual Polar Plunge in Rathmullan.

The next sponsored event and the first thing for 2020 is the New Year’s Day swim in Marble Hill, which is run by our club colleagues from the Ards Swimming Club, an event that draws a big crowd of participants and is always a great way to welcome in a New Year.

Once again all the organisers’ hard work is focused to providing vital funds for various charities and their efforts are always very much appreciated indeed.