A graduation with a difference for Donegal mum and daughter

Donegal student had open-heart surgery on day of graduation 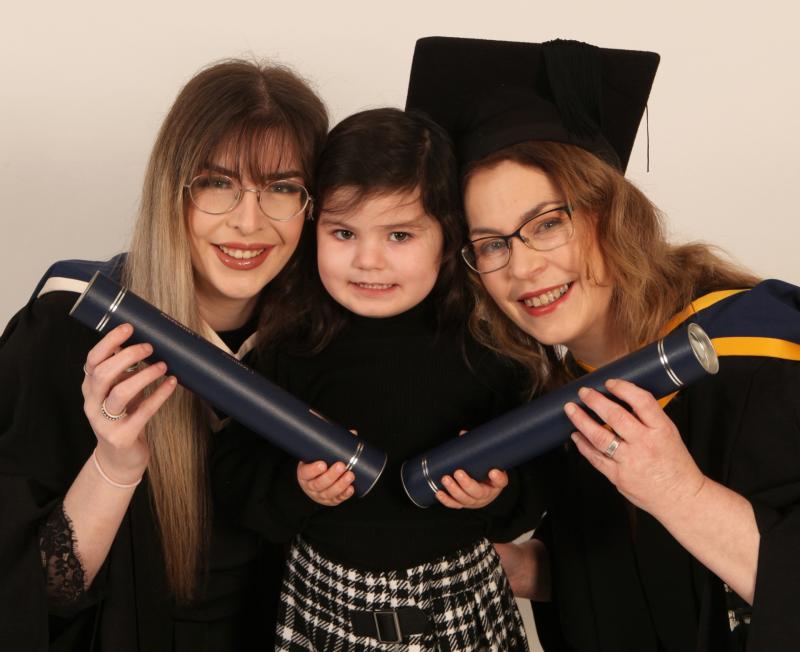 For a mother and daughter to graduate from college on the same day is a brilliant achievement in itself.
However, mum Marie Coll and her daughter Amy’s story is a little more inspiring when you consider all that Amy has come through in her short life to date.
The 22-year-old has had major health issues since she was very young and underwent a procedure at just two years of age to repair a hole in her heart.
Fast forward to last October and on the day when she was supposed to be celebrating her graduation at Letterkenny IT, she was in theatre in a hospital in Dublin, undergoing open-heart surgery.
Her mum Marie takes up the story:
“We’ve always been positive as a family and we count ourselves very fortunate that Amy has been able to receive the care and medical attention that she has.
“She knew for some time when she was at college that her operation was coming up and it just so happened that on the day she was to graduate in Letterkenny, she was in theatre.
“Thankfully, it all went well, and she’s actually back studying now for her honours degree.”
Amy, a past pupil of PCC Falcarragh, missed a lot of time at primary and secondary school due to her health issues. But she did not let that stand in her way when it came to her education.
Indeed, she did so well in her Leaving Cert that she could have attended several different colleges, but chose to study an arts course in digital film and video at Letterkenny IT in order to be closer to her Falcarragh home.

Back to college
It helped too that her mum Marie took the brave step to return to the books and went back to college to study general nursing.
She had been working as an SNA but was interested in a career in nursing.
“I’m 52 now, I was 48 then, and I just had this attitude that the older you get in life, you might end up regretting not doing something that you really want,” she said.
“It was definitely a big change for me, but I got on so well and it has all worked out really well.”
Marie graduated with a Bachelor of Science (Hons) in general nursing from LYIT and is now working in Letterkenny University Hospital.
The family had planned to mark the two graduations with a special celebration at Christmas but due to the rise in Covid-19 cases, that was put on hold.
Instead, the family, including Marie’s grand-daughter Annieleigh, held a quieter celebration at home.