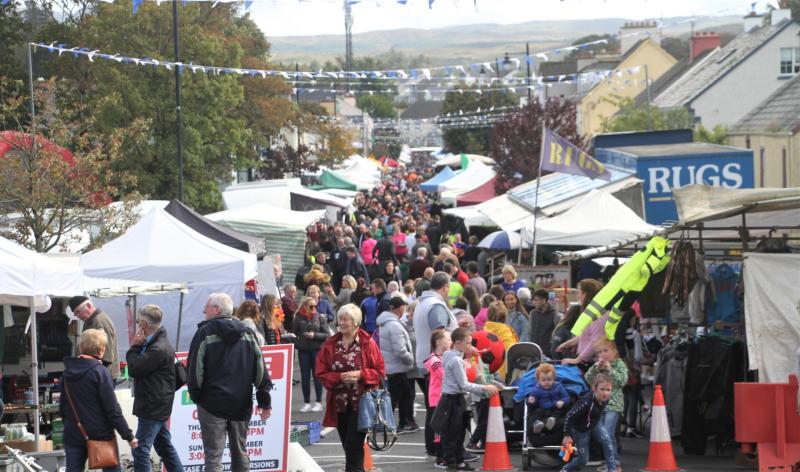 A Harvest Fair Day from a few years ago

One of the oldest fairs in the country is due to take place in Glenties from Thursday, September 8 until Monday, September 12. Glenties Harvest Fair will be held for the first time, this year, since the pandemic and the 60-strong local committee has been working hard to ensure this year’s fair will be a huge success.

Many people have returned home from abroad to the town for the event and people have planned their holidays around the return of Glenties Harvest Fair, according to a spokesperson for the fair, Michael Brennan, who says there is palpable excitement in the town.

The festival was officially launched in August by the European u-18 European silver medalist Fintan Dewhirst who will officially open the fair on Thursday.

Mr Brennan said a fair day used to take place over the years on the twelfth of every month. However events changed in 1972, he said, when the largest fair day of the year, September 12, became the festival which has evolved into the festival it is today.

This year between 6 and 8 farmers are going to hold an exhibition-type sale. The animals will be penned outside the town and then brought early in the morning when buying and selling can take place.

Mr Brennan said: “It does bring back the traditional part of the fair as well because that used to happen when I was young the animals would be brought in and tied up across from the chapel on the railings.”

This year, photographer Michael Jack will be remembered on Saturday as a photography competition takes place in his memory.

“A legend, he lived for everything Glenties and he certainly looked forward to the fair,” he said.

Ladies night takes place on Saturday night at 7pm with champagne receptions and make-up demonstrations in the Highlands Hotel. At 10am on Saturday the horticultural show is back in the community hall. The Patsey Furey competition takes place in the GAA grounds. Mickey Joe Harte and Rory Gallagher & The Island take to the stage at 7pm followed by the King and Queen Harvest Fair Dance with music by The Humble Earthworms at 11pm.

“It is going to be a great night of music, that night, because it will just be back-to-back music,” he said.

Live music will take to the street from 2pm on Sunday with Keelan Browne. Mr Brennan said that this year the float parade on Sunday will be a huge event with a whole carnival taking place.

“There will be carnival drummers and everything,” he said.

Keelan Browne will take to the stage again at 4pm and at 6pm Robert Mizzel will be live in the Highlands Hotel.

“Sunday night will see music in all the bars. We tried to get music for everyone by having the Humble Earthworms and then country night on Sunday,” he said.

For all information and schedule of, please go to social media pages or glenties.com