Glenties Harvest Fair Day will be remembered for years to come

'It is the biggest festival ever. People wanted it back' - Philip Rodgers of Roddy's Bar 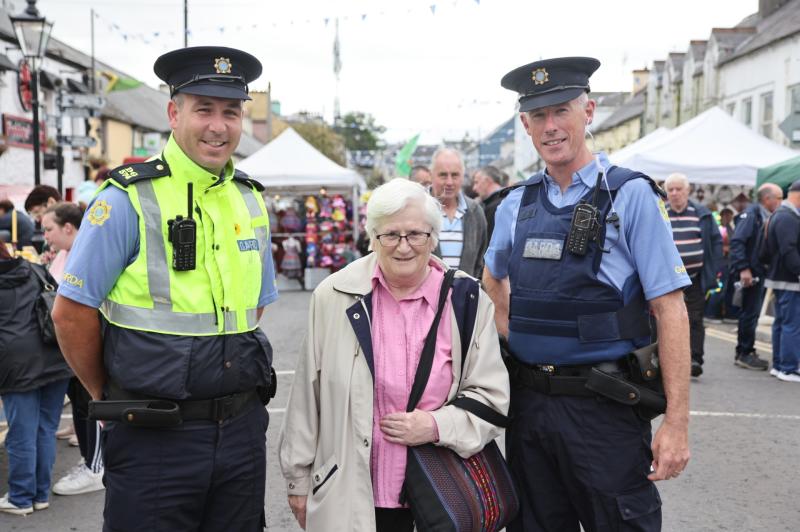 “They’ve a different breed in the pens today,” says a passer-by, casting a glance at sheep pens which are lined up outside Glenties garda station as part of the Harvest Fair on Monday. There are roars of laughter from those who are passing.
The sheep have been reintroduced this year to events at the Glenties Harvest Fair and many agree it adds a further touch of tradition to what has proven to be a highly successful festival.
TG4 have set up opposite the sheep pen and Leo Mac a' Luain, of Leo’s pub on the main street, is singing Fáinne Geal an Lae. A crowd of people have gathered to listen. People describe how sheep used to be a strong feature of the festival, at one time.
Hughdie Gallagher who was born in the area recalls a time when every house in the region held sheep. Speaking in Gaeilge, Hughdie, who now lives in Gaoth Dobhair, says at one time there used to be rows of sheep on each side of the street.
“There are not as many sheep now. There were sheep in every house that time and there were few marts to sell the sheep at. The new-born sheep could be sold when the fair day came in September.”
Many remember when sheep were tethered to railings at the top of the main street.

‘Kick for Keegan’ - a special Donegal thank you to Temple Street

Conaill Ó Coilín can recall days when the sheep were bought and sold in Glenties. Born in 1933, in Cruach an Airgid, he can recall, as a young boy, helping put sheep on the train in 1946.
Speaking in Gaeilge, Conaill said that in 1947 the train was discontinued adding that a rail cart continued for a tenure to the area bringing products for local factories such as McDevitts.
“I remember that years ago there was very little being sold on the street apart from delft and clothes. It isn’t like it is now, you can buy almost anything on the street. I have been coming to the fair from as far back as I can remember,” he said.
Gifted with a great sense of humour when asked what age he is, he quickly answers: “I turned eighty-nine years of age two weeks ago or so they tell me.”
Later on Monday evening, Conaill took a seat outside Roddy’s bar near the bridge on Glenties Main Street and demonstrated how to make súgán - a type of organic rope that was used to hold sheep in bygone days, straw was often used in rural Ireland. This is a craft that is seldom seen demonstrated these days and he was dutifully helped in his demonstration by good-humoured Garda Richard Quigley who was instrumental in the organisation of Glenties Harvest Fair this year. Conaill has demonstrated his expert technique on fair day for many years.
There has not been a festival since the pandemic and this year people were delighted to see it return as tens of thousands made their way to the town over the course of five days. 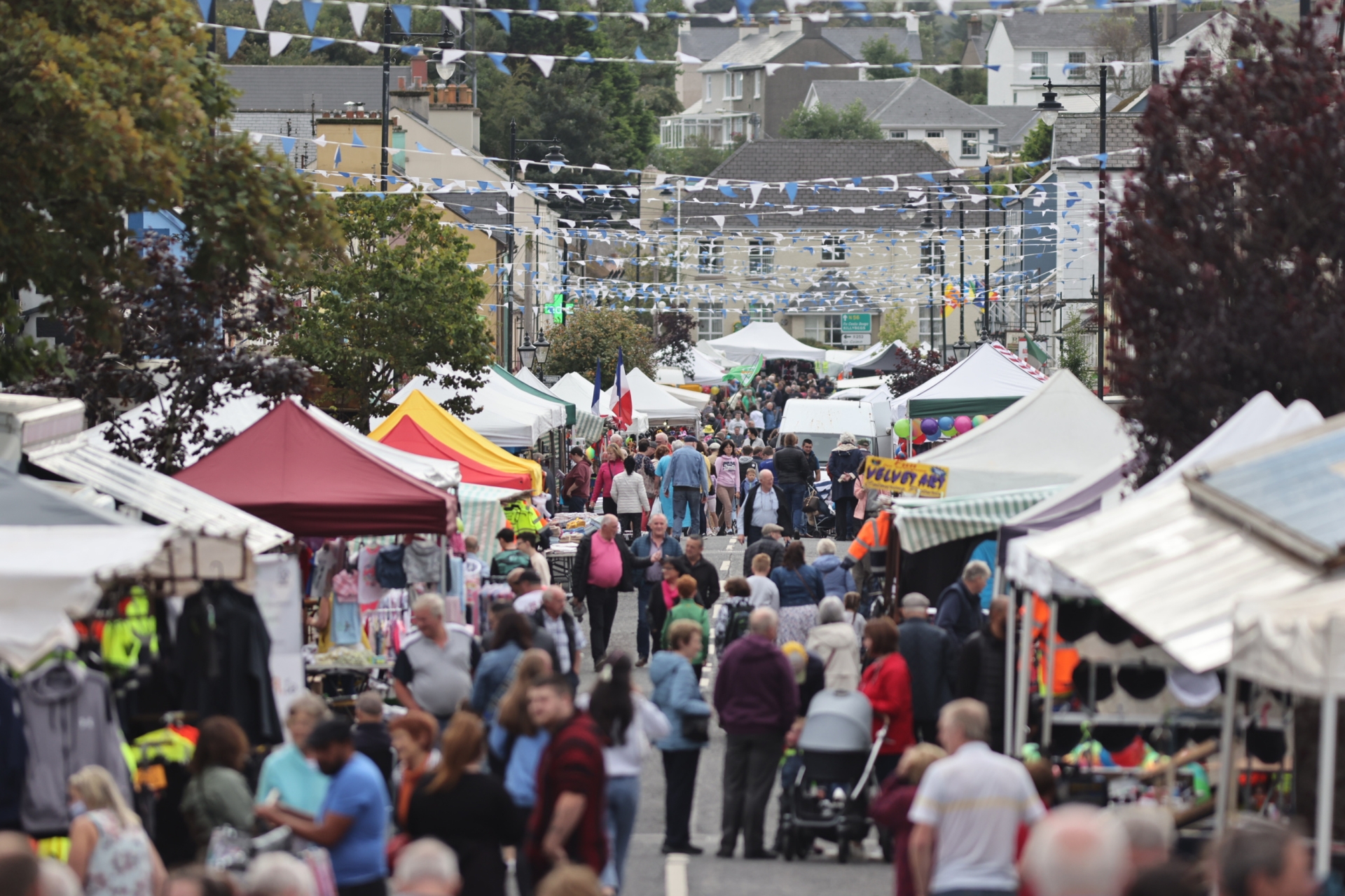 Philip Rodgers was being kept busy on Monday as crowds passed by outside his popular bar, Roddy’s. Inside the bar it was busy as well with locals and visitors enjoying the event.
“It is the biggest festival ever. People wanted it back,” Philip says as he lifts glasses quickly from the bar. There is a murmur of agreement from all sides of the bar.
Many of the organisers agree that this year has been a resounding success. Outside traditional Irish musicians are playing jigs and reels and people stop to listen. Inside folk songs are being played as people laugh and talk to one another, enjoying the atmosphere that they have missed for a couple of years - an atmosphere enjoyed by past generations.
Walking alongside the crowds on the street one of the main organisers, Mary Thompson, agrees the festival has been a success. She stops for a second and recalls the days when both she and her father were instrumental in the festival. Days of swing boats during the early days of the festival spring to her mind as she takes time to reminisce on times gone by.
Ladies night took place on Saturday night in the Highlands Hotel and many said the event was well attended and very much enjoyed.
The horticulture show was reintroduced this year. The event saw many people cook their hearts out and other people bring their prize vegetables to showcase. Mary Thompson was delighted with the success of the day which is quickly becoming one of the most popular events of the festival.
She is soon approached by a passer-by who shakes her hand and begins to speak to her. Mary smiles warmly and droves of people weave around her and her friend on the main street. They are soon lost in an ocean of people.
The smell of burgers being cooked wafts down the street and bubbles being shot from bubble guns bob along the pavement. Children stop and point at the guns and balloons being sold at a stall making a firm case to their parents as to why they might need them.
Teenagers walk along the street, young men with hands in their pockets, jingling coins - a jingle that would have been heard on fair day many years ago - an expectant smile on their faces.
Teenage girls walk by, mobile phones in their hands busily texting and taking pictures.
People stop and take the time to stand and shake hands and hug people they only meet once-a-year at the Glenties Harvest Fair. Gardaí walk up and down the street ensuring that everything is as it should be. Local take-aways are busy and tables are full. Many sit on window sills eating bags of salted chips and drinking cans of mineral and watch people pass them by.
A spokesperson for the festival, Michael Brennan, said that people organise their holidays around the event this year. People travelled from as far afield as Australia and America to attend the event which began last Thursday.


A fair day used to take place over the years on the twelfth of every month, according to Mr Brennan. Events changed in 1972, he said, when the largest fair day of the year, September 12, evolved into the festival it has become today. On that September day many of the large traders would travel into the town to sell their ware and produce and the day seemed perfect to build a festival around.
This year, there were over fifty people on the organising committee and there were also subcommittee members stemming from the main committee.
Bradas O’Donnell expected huge crowds in the town on Monday evening. At around 6pm on Monday a multi-coloured tail of cars and vans meandered along each road leading into the town. The lights of the funfair beside Glenties Comprehensive School were glistening and the screams of children could be heard as darkness threatened to fall.
Asked how busy the town would be later on Monday evening, Bradas takes a second to gather his thoughts and quickly answers: “You’ll never turn a sweet in your mouth from six o’clock onwards.”
This year is a special year for Bradas. His 92-year-old mother Nora Jack O’Donnell won the best bread at the Harvest Fair.
Bradas goes on to say his mother went on to enjoy the music and song of Mickey Joe Harte and made her way across to the hotel to enjoy the country music of Robert Mizzell at the weekend. There are murmurs of admiration from those in his company.
Organisers say that on Saturday, at least ten thousand people made their way into the town.
The streets of the town were lined with stalls with traders selling everything from bicycle pump repair kits, mats, throws, sheep and plants.
As darkness falls and traders begin to pack their ware away many seasoned festival goers chance their arm and begin to haggle in earnest - a sport best exercised when hardened traders are worn down from the day’s events.
A trader with a tired face watches in trepidation as a bagless elderly woman approaches - her lips shut tight, her eyes determined and focused.
She stands in front of his stall and speaks. The trader shakes his head from side to side and turns his back to her. She stands firm.
Families walk off the main street - their silence portrays their tiredness. The elderly lady passes them, a bag in hand.
Glenties Harvest Fair is one of the oldest in the country - a festival that reaches back into the ages and will no doubt reach into the future under a strong, hard-working committee.
ADVERTISEMENT - CONTINUE READING BELOW