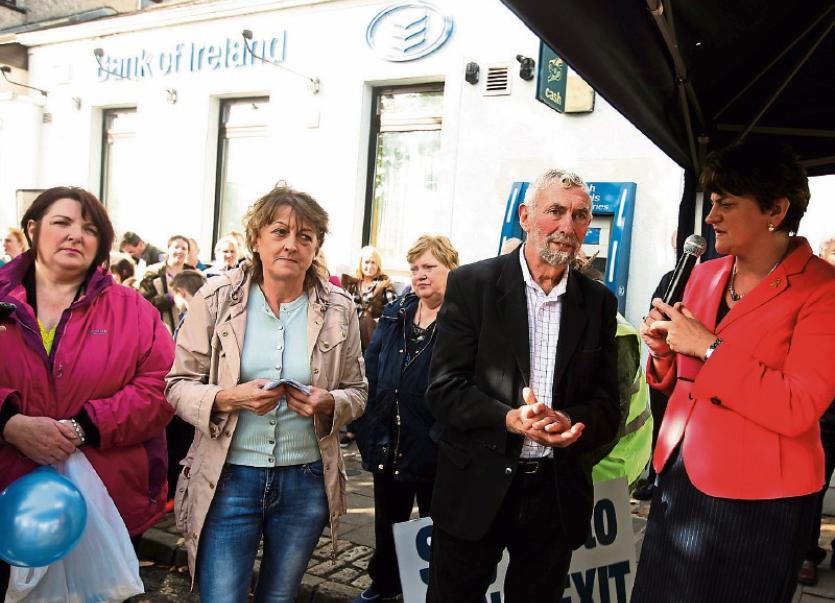 There's been an angry reaction to confirmation that Bank of Ireland will close its branch in Belleek.

In a letter to a member of Belleek Chamber of Commerce, the bank's NI regional director, Sean Sheehan, wrote, “Our decision to close the Belleek branch has not been taken lightly”.

Since the closure was first announced in July, there have been protests in Belleek and a petition signed by 7,500 people asking the bank to reconsider. NI First Minister Arlene Foster come to Belleek to lend her support.

Now, the border village will be left without a bank and locals will have to undertake a 50 mile round trip to Enniskillen to do their banking.

Belleek Chamber of Commerce member Bridie Gormley, who received the letter, said the decision to close shows “total disrespect and total disregard” for the 7,500 people who signed the petition.

In his letter, Mr Sheehan said the closure follows “a very detailed review” of the bank's branch network in NI,

He noted the move to phone and online banking and the need to ensure that branches are “sustainable in the long term”.

He pointed to a general 50% increase in banking app logins last year versus a 32% fall in average daily branch visits since 2011 and said Bank of Ireland NI has “seen similar trends”.

Mr Sheehan said that, since the announcement in July, the bank has “met, listened and responded to a number of key stakeholders, including yourself, on behalf of the Belleek Chamber of Commerce, regarding the closure of the Belleek branch” and consulted with staff and their representatives.

The bank is now “starting to implement our branch closure plans and issue customer communications,” he added.

Ms Gormley said the Bank had shown “total disregard” for the local people as well as First Minister Arlene Foster and all the political parties who were represented at the protest.

Mr Sheehan advised that customers could use the Post Office and said they would “work with them to ensure we can continue to support their personal and business banking needs”.

Ms Gormley pointed out, however, that the Post Office in Belleek “has been downgraded.

“It is very small with a glass surround and I don’t know how people would be able to do their banking in a confidential manner”.

She believes that many locals “will take their accounts out of the Bank of Ireland on a point of principle”.

Ms Gormley added, “They will still have to travel, but they will not forget the sheer disrespect shown by the Bank of Ireland, with whom they had been banking for years.

“There is a lot of anger and disappointment in and around Belleek.

“Everyone is just so angry with the Bank and I can see a lot of people leaving the Bank of Ireland just like they left us,” Ms Gormley concluded.