Postmistress to step down; An Post has placed contract for the branch out to public consultation. 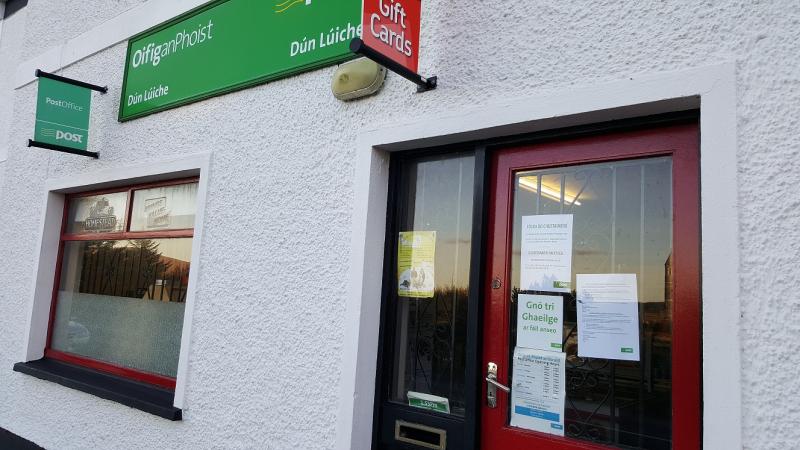 The Dún Lúiche community is organising a letter-writing campaign in support of the post office in the Gaeltacht village.
About 50 people attended a public meeting Monday night in the local community centre, following last week’s announcement by An Post that it has placed the contract for the local post office branch out to public consultation.
Margaret Mary Gallagher, who has been the local postmistress for 22 years, has said she will step down by year’s end. Several speakers credited her for the service she has provided the community over the years.
Members of the public at the meeting spoke of local residents without transport who rely on neighbours to bring them to the post office. If the Dún Lúiche post office were to close, the nearest would be about 13km and a costly taxi trip away in Bunbeg.
People also spoke of the importance of the post office to visitors and tourists who come to the village at the base of Errigal for the Irish college, to visit Ionad Cois Locha and to stay at the Errigal hostel.
However, Mrs. Gallagher said her post office income is linked to post office transactions, and she said there has not been enough post office business to keep the operation viable for some time.
”It was out of loyalty and not wanting to be the one to leave the post office that I stayed here as long as I have,” Mrs. Gallagher said on Tuesday morning. Her grandparents opened the post office in 1955 and she is the third generation of the McGeady family to operate the business.
Pat “the Cope” Gallagher, Fianna Fáil TD, one of the elected representatives at Monday’s meeting, said he believed there should be a basic income for every post office, irrespective of turnover. “It’s unfair to expect people in the area to provide a service for little or nothing,” he said.
Pearse Doherty, Sinn Féin TD, who with Sinn Féin Cllr. John Sheamais Ó Fearraigh called Monday’s meeting, said, “You can see from crowd here that there’s a passion to keep the service here."
See Thursday's Donegal Democrat for more.